Comments (0)
Add to wishlist Delete from wishlist
Cite this document
Summary
The paper studies two different cases and helps to analyze the difference between the judgments provided based on the variability of the situation. It also underlines the fact that the courts held matter of fraud in a serious manner…
Download full paper File format: .doc, available for editing
HIDE THIS PAPERGRAB THE BEST PAPER92% of users find it useful 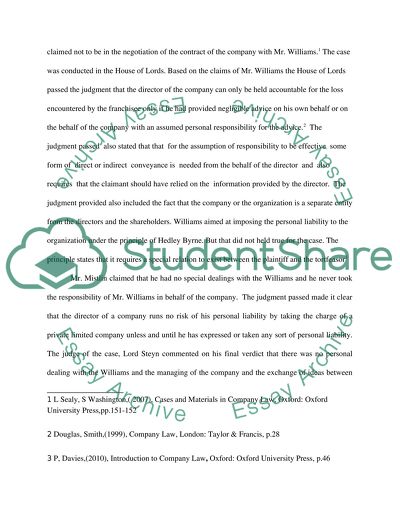 Download file to see previous pages gment passed also stated that that for the assumption of responsibility to be effective some form of direct or indirect conveyance is needed from the behalf of the director and also requires that the claimant should have relied on the information provided by the director. The judgment provided also included the fact that the company or the organization is a separate entity from the directors and the shareholders. Williams aimed at imposing the personal liability to the organization under the principle of Hedley Byrne. But that did not held true for the case. The principle states that it requires a special relation to exist between the plaintiff and the tortfeasor3 Mr. Mistlin claimed that he had no special dealings with the Williams and he never took the responsibility of Mr. Williams in behalf of the company. The judgment passed made it clear that the director of a company runs no risk of his personal liability by taking the charge of a private limited company unless and until he has expressed or taken any sort of personal liability. The judge of the case, Lord Steyn commented on his final verdict that there was no personal dealing with the Williams and the managing of the company and the exchange of ideas between them never crossed the line which could create a feeling among the Williams that he had taken the personal responsibility for them. It was held as a case of negligent representation by the company.4 Standard Chartered Vs Pakistan National Shipping Corporation Limited: The case involved three main organizations which are Standard Chartered, Oak Prime, and The Pakistan National Shipping Corporation. In the particular case Pakistan National shipping Corporation was the shipping agent of the delivery of Iranian Bitumen sold by Oakprime. Incombank issued a letter...
This research have discussed the two cases and their judgment cited had some similarity and differences. In both the case, the convict accused was the part of the organization, and in both case both of them belonged to the managerial levels. The accused was held guilty on matters of misrepresentation of certain scenario. In the case of the Williams and the Natural life heath foods limited the Williams carried out their legal case as because they suffered loses based on the financial projections provided to them by the director, similarly in the case of the Pakistan National Shipping Corporation and the Standard Chartered bank, the director of the Oakprime was held as accused on behalf of the false representation of the bills. The judgment in the identical cases was completely different from each other. In the case of the Williams, the director of the concerned organization was let free and the case was represented as scenario of unintentional misrepresentation. The judgment stated that the director cannot be held responsible for any personal loses of the franchisee based on the dealings between them until he had shown his personal liability for the matter and he has any personal relationship with the party. Whereas in the other case the judgment showed that the director or the management person concerned cannot hide his fault behind the liability of his company. Mr Mehra deliberately made the false statement so that he may attain the payment for the letter of credit. The law cited strictness in matters of fraud cases than in general matters concerned. ...Download file to see next pages Read More
Share:
Tags
Cite this document
(“Company Law Essay Example | Topics and Well Written Essays - 1500 words”, n.d.)
Retrieved de https://studentshare.org/law/1392860-company-law