Comments (0)
Add to wishlist Delete from wishlist
Cite this document
Summary
Practitioners and scholars, both are endowing people with verifying views of a simple and a straight forward question who has the power in EU and how power balances amongst these three main actors in the context of legislative decision making. The simple answer is European Parliament is gaining more and more power…
Download full paper File format: .doc, available for editing
HIDE THIS PAPERGRAB THE BEST PAPER98.4% of users find it useful 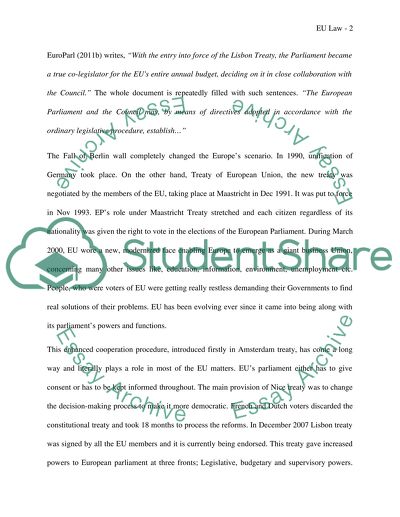 Download file to see previous pages The first elections of the European parliament “by direct universal suffrage” took place in June 1979 (Europa, 2007). Since then these elections take place every five years giving more strength and responsibility to the Parliament. In European Union, EP is the only directly elected body. Every five year, 27 member states select 736 Members, which represent 500 million people of EU (EuroParl, 2011a). It covers every sphere of EU’s citizens life; civil, social, political, economical and environmental. Its domain of control is huge. Gradually EU’s parliament has gained a position of “co legislator” for all the new laws and amendments. Few people say that it has given increased powers and it can exercise it anywhere it wants. It has given supervisory powers in law making; even the Central bank cannot select its president without EU’s Parliaments assent. EuroParl (2011a) writes, “The European Parliament and the Council must adhere to the annual spending limits laid down in the multiannual financial perspective.” It has all the controlling power in monetary matters. It can also set up inquiries over controversial matters.
EuroParl (2011b) writes, “With the entry into force of the Lisbon Treaty, the Parliament became a true co-legislator for the EU's entire annual budget, deciding on it in close collaboration with the Council.” The whole document is repeatedly filled with such sentences. “The European Parliament and the Council may, by means of directives adopted in accordance with the ordinary legislative procedure, establish…”...
In 1990, unification of Germany took place. On the other hand, Treaty of European Union, the new treaty was negotiated by the members of the EU, taking place at Maastricht in Dec 1991. It was put to force in Nov 1993. EP’s role under Maastricht Treaty stretched and each citizen regardless of its nationality was given the right to vote in the elections of the European Parliament. During March 2000, EU wore a new, modernized face enabling Europe to emerge as a giant business Union, concerning many other issues like, education, information, environment, unemployment etc. People, who were voters of EU were getting really restless demanding their Governments to find real solutions of their problems. EU has been evolving ever since it came into being along with its parliament’s powers and functions. This enhanced cooperation procedure, introduced firstly in Amsterdam treaty, has come a long way and literally plays a role in most of the EU matters. EU’s parliament either has to give consent or has to be kept informed throughout. The main provision of Nice treaty was to change the decision-making process to make it more democratic. French and Dutch voters discarded the constitutional treaty and took 18 months to process the reforms. In December 2007 Lisbon treaty was signed by all the EU members and it is currently being endorsed. This treaty gave increased powers to European parliament at three fronts; Legislative, budgetary and supervisory powers. Witte, et al. (2010, pp.67) states, “Lisbon treaty has entrusted the EP with more active role in law making.” Enhanced co operation procedure was initiated in 1987, in which EP was free to give opinions and regulate directives proposed by the EC and ...Download file to see next pages Read More
Share:
Tags
Cite this document
(“EU Law Essay Example | Topics and Well Written Essays - 2250 words”, n.d.)
Retrieved de https://studentshare.org/law/1392853-eu-law

CHECK THESE SAMPLES OF EU Law

In th...
8 Pages (2000 words) Case Study
sponsored ads
Save Your Time for More Important Things
Let us write or edit the essay on your topic "EU Law" with a personal 20% discount.
GRAB THE BEST PAPER

Let us find you another Essay on topic EU Law for FREE!