Comments (0)
Add to wishlist Delete from wishlist
Cite this document
Summary
Right to Self-Determination and the Opinions of the Badinter Committee on the Socialist Federal Republic of Yugoslavia The right to self-determination is a thorny issue in international law. In its classical conception, it means the international recognition of the right of the inhabitants of a colony to choose freely their independence or association with another state…
Download full paper File format: .doc, available for editing
HIDE THIS PAPERGRAB THE BEST PAPER93.1% of users find it useful 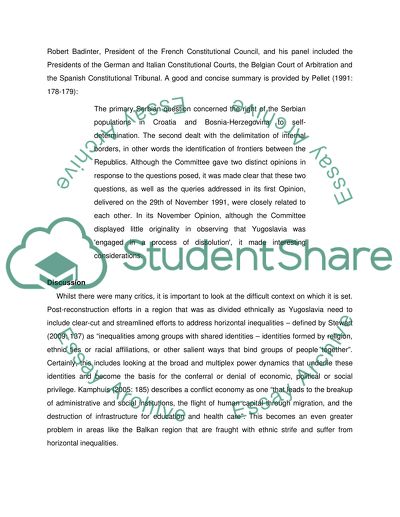 Download file to see previous pages itory. Under this conception, self-determination goes beyond the rights of distinctive territorial communities to choose their own government and independence; it is a right of self-government for all peoples. Noteworthy is Principle VIII of the Helsinki Accord of 1975, which reads as follows: “By virtue of the principle of equal rights and self-determination of peoples, all peoples have the right, in full freedom, to determine, when and as they wish, their internal and external political status, without external interference, and to pursue as they wish their political, economic, social and cultural development.” It must said, however, that a too-radical interpretation of this provision should not be countenanced. There must be no disruption of the territorial integrity of states, and the principle must not be used as a blanket sanction for secession. Many legal thinkers posit, however, that this is not inconsistent with the recognition of internal free choice. (Henkin, 283.) The right of self-determination is important in light of the case of the Socialist Federal Republic of Yugoslavia. This paper will discuss the importance of the case of the Socialist Federal Republic of Yugoslavia in the context of the opinions of the Badinter Committee. Background In August of 1991, The European Community formed the Badinter Committee which would arbitrate legal issues arising from the conflicts in Yugoslavia, in light of the cessation of the Republics of Croatia, Macedonia and Slovenia. The chosen chair of the committee was Mr Robert Badinter, President of the French Constitutional Council, and his panel included the Presidents of the German and Italian Constitutional Courts, the Belgian Court of Arbitration and the Spanish Constitutional Tribunal. A good and concise summary is provided by Pellet (1991: 178-179): The primary Serbian question concerned the right of the Serbian populations in Croatia and Bosnia-Herzegovina to self-determination. The second dealt with the delimitation of internal borders, in other words the identification of frontiers between the Republics. Although the Committee gave two distinct opinions in response to the questions posed, it was made clear that these two questions, as well as the queries addressed in its first Opinion, delivered on the 29th of November 1991, were closely related to each other. In its November Opinion, although the Committee displayed little originality in observing that Yugoslavia was 'engaged in a process of dissolution', it made interesting considerations. Discussion Whilst there were many critics, it is important to look at the difficult context on which it is set. Post-reconstruction efforts in a region that was as divided ethnically as Yugoslavia need to include clear-cut and streamlined efforts to address horizontal inequalities – defined by Stewart (2009: 137) as “inequalities among groups with shared identities – identities formed by religion, ethnic ties or racial affiliations, or other ...Download file to see next pages Read More
Share:
Tags
Cite this document
(“INTERNATIONAL LAW Essay Example | Topics and Well Written Essays - 2000 words”, n.d.)
Retrieved de https://studentshare.org/law/1392739-international-law

CHECK THESE SAMPLES OF INTERNATIONAL LAW

As a matter of fact, Hoffman’s statement that “international affairs is the nemesis of liberalism” has a grain of truth in it and this is especially so after the 9/11 incident.
There are two schools of thought or perspectives that are used to view international affairs: liberalism and realism. The study of these two perspectives is significant to the idea posed by Stanley Hoffman because they determine the reasons why international affairs, according to him, does not only see eye-to-eye with liberalism but seems to stand on the opposing side of it.
Liberalism can be defined as having four elements: citizens; the legislature; property rights, and; a market-driven economy (Dunne 186). Realism, on the othe...
6 Pages (1500 words) Assignment
sponsored ads
Save Your Time for More Important Things
Let us write or edit the essay on your topic "INTERNATIONAL LAW" with a personal 20% discount.
GRAB THE BEST PAPER

Let us find you another Essay on topic INTERNATIONAL LAW for FREE!