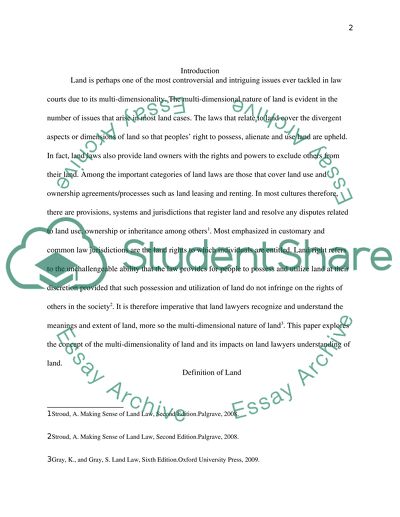 Download file to see previous pages The laws that relate to land cover the divergent aspects or dimensions of land so that peoples’ right to possess, alienate and use land are upheld. In fact, land laws also provide land owners with the rights and powers to exclude others from their land. Among the important categories of land laws are those that cover land use and ownership agreements/processes such as land leasing and renting. In most cultures therefore, there are provisions, systems and jurisdictions that register land and resolve any disputes related to land use, ownership or inheritance among others1. Most emphasized in customary and common law jurisdictions are the land rights to which individuals are entitled. Land right refers to the unchallengeable ability that the law provides for people to possess and utilize land at their discretion provided that such possession and utilization of land do not infringe on the rights of others in the society2. It is therefore imperative that land lawyers recognize and understand the meanings and extent of land, more so the multi-dimensional nature of land3. This paper explores the concept of the multi-dimensionality of land and its impacts on land lawyers understanding of land. Definition of Land The apparent importance of land even as early as the beginning of civilization has led to almost all world cultures recognizing the need to regulate its ownership and use4. Despite the origins of land laws being in ancient times, land laws remain a core component of the society even in modern times. At the start of any legal process on land issues, it is important that all those involved, particularly the lawyers, define the subject matter, which in this case is land. According to section 205 (1) (ix) of the LPA 1925, the land comprises “land of any possession or tenure and minerals and mines , any structure or part of any structure or other corporeal hereditaments ; it also includes an advowson, a manor and a rent and an easement , privilege , right or advantage in , over or enjoyed from land.” Accordingly, in legal parlance, a land includes both the corporeal and physical assets and the privileges that the owner or third parties may benefit from or over it5. The other conspicuous term in the definition of land in most statutes is ‘any tenure’. By the term land tenure are referred the two main types of ownership; leasehold and freehold, both of which refer to land in legal land issues. Freehold tenure refers to a situation in which an individual owns a piece of land forever/without end. On the other hand, leasehold ownership is a situation in which a tenant owns land for a given period (short or long but not indefinitely)6. From the two definitions, it is evident that leasehold ownership is a creation of freehold tenure. Unlike the Winter Garden Theatre (London) Limited versus Millennium Productions Limited Case of 1948, which had no term allowing the licensor to revoke the leasehold, it is important that contracts are clearly drawn in leaseholds. The Multi-Dimensionality of Land In addition to land tenure, the other important component of the definition of land is the extent of land. For instance, land is defined to include the mines and minerals therein, whether they belong to the owner of the surface of the land or not. The meaning of land thus includes both the vertical or horizontal division apart from the surface. Thus, a transfer of a land with two dimensional would have not only less ...Download file to see next pagesRead More
Share:
Tags
Cite this document
(“Land Law Assignment Example | Topics and Well Written Essays - 2500 words - 1”, n.d.)
Retrieved de https://studentshare.org/law/1392691-land-law
(Land Law Assignment Example | Topics and Well Written Essays - 2500 Words - 1)
https://studentshare.org/law/1392691-land-law.
“Land Law Assignment Example | Topics and Well Written Essays - 2500 Words - 1”, n.d. https://studentshare.org/law/1392691-land-law.
Comments (0)
Click to create a comment or rate a document

CHECK THESE SAMPLES OF Land Law

In th...
8 Pages(2000 words)Case Study
sponsored ads
Save Your Time for More Important Things
Let us write or edit the assignment on your topic "Land Law" with a personal 20% discount.
GRAB THE BEST PAPER

Let us find you another Assignment on topic Land Law for FREE!