Comments (0)
Add to wishlist Delete from wishlist
Cite this document
Summary
Proposal Name 11-20-2011 A partnership is the relation which exists between two or more persons carrying on a business in common with a view of making profit. A partnership is deemed to be in existence where there is joint tenancy in common, common property or part ownership and sharing of profit from the business…
Download full paper File format: .doc, available for editing
HIDE THIS PAPERGRAB THE BEST PAPER94.9% of users find it useful 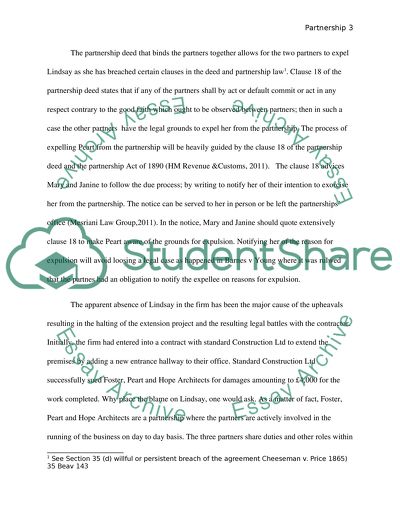 Download file to see previous pages The firm which was formed five years go in the town of Oldchester is therefore, a partnership for a fixed term with written set of partnership articles. The partnership deed is a contractual agreement between the partners in a given partnership. It stipulates guidelines and the relationship between the partners and between the partners and third parties such as the firm. When former their partnership, the three partners, Lindsay Peart, Mary Hope and Janine Foster had drawn a partnership deed. One of the clauses which are in the deed is 18 on the conduct of partners and condition for expulsion of a partner. Of late, the partnership has been parting in the midst of a crisis caused by uncouth conduct of one of the partners, Lindsay Peart. Lindsay has been away from the daily management of the partnership on the pretext of sickness. However, the other two partners have information that she had actually been convicted and fined for criminal offence for damage. To make matters worse, her social behavior has had negative effect on the firm image. It is alleged that she had written some swear words on the wall of a Bank in the town with spray paint while under the influence of alcohol. The behavior of Lindsay has become unbearable prompting the other two partners to consider expelling her from the partnership. ...
The process of expelling Peart from the partnership will be heavily guided by the clause 18 of the partnership deed and the partnership Act of 1890 (HM Revenue &Customs, 2011). The clause 18 advices Mary and Janine to follow the due process; by writing to notify her of their intention to exorcise her from the partnership. The notice can be served to her in person or be left the partnerships’ office (Mesriani Law Group,2011). In the notice, Mary and Janine should quote extensively clause 18 to make Peart aware of the grounds for expulsion. Notifying her of the reason for expulsion will avoid loosing a legal case as happened in Barnes v Young where it was rulwed that the partnes had an obligation to notify the expellee on reasons for expulsion. The apparent absence of Lindsay in the firm has been the major cause of the upheavals resulting in the halting of the extension project and the resulting legal battles with the contractor. Initially, the firm had entered into a contract with standard Construction Ltd to extend the premises by adding a new entrance hallway to their office. Standard Construction Ltd successfully sued Foster, Peart and Hope Architects for damages amounting to ?4,000 for the work completed. Why place the blame on Lindsay, one would ask. As a matter of fact, Foster, Peart and Hope Architects are a partnership where the partners are actively involved in the running of the business on day to day basis. The three partners share duties and other roles within the firm. Apparently, Lindsay Peart was directly responsible for the implementation of the extension project, leaving the other two partners to concentrate on other ...Download file to see next pages Read More
Share:
Tags
Cite this document
(“Company law Assignment Example | Topics and Well Written Essays - 2250 words”, n.d.)
Retrieved de https://studentshare.org/law/1392510-company-law

In th...
8 Pages (2000 words) Case Study
sponsored ads
Save Your Time for More Important Things
Let us write or edit the assignment on your topic "Company law" with a personal 20% discount.
GRAB THE BEST PAPER

Let us find you another Assignment on topic Company law for FREE!