Comments (0)
Add to wishlistDelete from wishlist
Cite this document
Summary
Age discrimination can be experienced by all people of all ages but mainly between the older and the younger people mostly if the legal action is implicated for the older workers suffering discrimination.Ageism encompasses a combination of institutional practices, individual attitudes and relationships…
Download full paperFile format: .doc, available for editing
HIDE THIS PAPERGRAB THE BEST PAPER96.7% of users find it useful 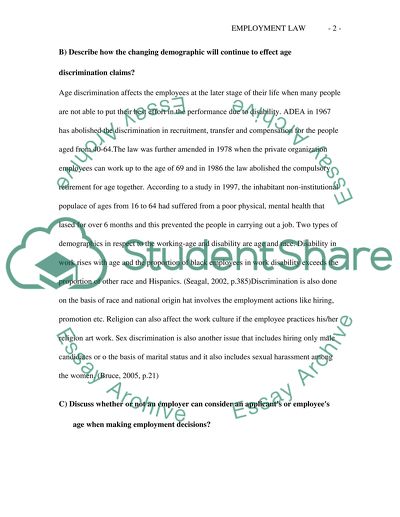 Download file to see previous pages Age discrimination can be experienced by all people of all ages but mainly between the older and the younger people mostly if the legal action is implicated for the older workers suffering discrimination. (Sargeant & Lewis, 2004, 87) Ageism encompasses a combination of institutional practices, individual attitudes and relationships
Ageism and age discrimination are different from each other, as ageism is application of assumed age –based group distinctiveness to an person, regardless of individual‘s actual personal character. However age discrimination refers to the rough ‘age proxies’ in personal decisions in regards to selecting, hiring, discharging, promotion, transfer, training and mandatory training (Macnicol, 2006, p.3). The Age Discrimination in Employment Act (ADEA) 1967 in the United States is applicable for all apparent groups. The Government’s consultation document identified both the direct and the indirect forms of age favoritism in employment and most obvious forms is the person’s ability to work or to be developed in relation to their age. When the US government had approved (ADEA) act it became a major issue from 1967.The act declared that the older people should be promoted on the basis of the ability than on the age, excluded the subjective age discrimination in employment and also facilitate the workers in solving problems arising from the impact of the age on the service (Sargeant, 2006, p.1-5).

B) Describe how the changing demographic will continue to effect age discrimination claims? Age discrimination affects the employees at the later stage of their life when many people are not able to put their best effort in the performance due to disability. ADEA in 1967 has abolished the discrimination in recruitment, transfer and compensation for the people aged from 40-64.The law was further amended in 1978 when the private organization employees can work up to the age of 69 and in 1986 the law abolished the compulsory retirement for age together. According to a study in 1997, the inhabitant non-institutional populace of ages from 16 to 64 had suffered from a poor physical, mental health that lased for over 6 months and this prevented the people in carrying out a job. Two types of demographics in respect to the working-age and disability are age and race. Disability in work rises with age and the proportion of black employees in work disability exceeds the proportion of other race and Hispanics. (Seagal, 2002, p.385)Discrimination is also done on the basis of race and national origin hat involves the employment actions like hiring, promotion etc. Religion can also affect the work culture if the employee practices his/her religion art work. Sex discrimination is also another issue that includes hiring only male candidates or o the basis of marital status and it also includes sexual harassment among the women. (Bruce, 2005, p.21) C) Discuss whether or not an employer can consider an applicant's or employee's age when making employment decisions? On the basis if the Age Discrimination in Employment Act (ADEA) an employer is prohibited to take decisions on the basis of age. Under this legislation an employer cannot force the employees to retire after a certain age, but it can apply seniority system that should not force an older workers leave the job. The law also includes all the list of employees to take a mandatory retirement like federal judges, pilots, enforcement officers and executives with provision of pensions. (Duekar, 2000, p.118)The act is applicable in both the private and government organization and it can be unlawful if the management fail to abide by the following rules that are: a) if the employer rejects to recruit or discharge an individual with respect to the compensation, terms and condition on the basis of the age; b)to limit or segregate any employees and deprive any employees opportunities that affect the status because of the age factor, c) to reduce the wage or salary of the workers ...Download file to see next pagesRead More
Share:
Tags
Cite this document
(“Employment law Term Paper Example | Topics and Well Written Essays - 750 words”, n.d.)
Retrieved de https://studentshare.org/law/1391101-employment-law

In th...
8 Pages(2000 words)Case Study
sponsored ads
Save Your Time for More Important Things
Let us write or edit the term paper on your topic "Employment law" with a personal 20% discount.
GRAB THE BEST PAPER

Let us find you another Term Paper on topic Employment law for FREE!