Comments (0)
Add to wishlist Delete from wishlist
Cite this document
Summary
The main issue is that how can one distinguish between a condition and a warranty as there stands no general rule for distinguishing them (Grant, 2010). …
Download full paper File format: .doc, available for editing
HIDE THIS PAPERGRAB THE BEST PAPER97% of users find it useful 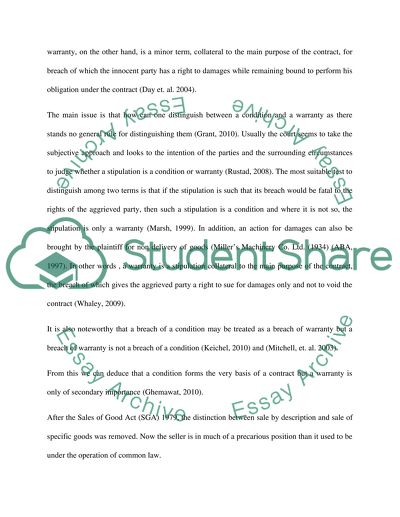 Download file to see previous pages The most suitable test to distinguish among two terms is that if the stipulation is such that its breach would be fatal to the rights of the aggrieved party, then such a stipulation is a condition and where it is not so, the stipulation is only a warranty (Marsh, 1999). In addition, an action for damages can also be brought by the plaintiff for non delivery of goods (Miller’s Machinery Co. Ltd. (1934) (ABA, 1997). In other words , a warranty is a stipulation collateral to the main purpose of the contract, the breach of which gives the aggrieved party a right to sue for damages only and not to void the contract (Whaley, 2009). It is also noteworthy that a breach of a condition may be treated as a breach of warranty but a breach of warranty is not a breach of a condition (Keichel, 2010) and (Mitchell, et. al. 2003). From this we can deduce that a condition forms the very basis of a contract but a warranty is only of secondary importance (Ghemawat, 2010). After the Sales of Good Act (SGA) 1979, the distinction between sale by description and sale of specific goods was removed. Now the seller is in much of a precarious position than it used to be under the operation of common law. The Unfair Contract Terms Act (UCTA) 1977, s.3, does not allow any seller to exclude liability in such a manner as Harry’s has attempted to do. From the events it turns out that Stubley Ltd. is a consumer in this case as their primary business is not buying cars for their directors and hence, this particular transaction will not be dealt with in the scope of business. Furthermore, under Section 12-15 of the Sales of Good Act there are seven implied terms in favor of the buyer and five of these have been ranked as conditions and two are regarded as warranties. The five statutory implied terms which are labeled as conditions are 1) title, 2) correspondence with description, 3) quality, 4) fitness for purpose and 5) correspondence ...Download file to see next pages Read More
Share:
Cite this document
(“Consumer law, warranties and conditions Essay Example | Topics and Well Written Essays - 2250 words”, n.d.)
Retrieved de https://studentshare.org/law/1390573-consumer-law-problem-question-advise-the-parties

CHECK THESE SAMPLES OF Consumer law, warranties and conditions

A landslide is a natural disaster which is the ‘downward and outward movement of a soil mass that formed part of a slope. A landslide may occur with or without any apparent disturbance and involves a soil mass ranging from a few to several million cubic meters.” (The Canadian Encyclopedia)
Landslides are dangerous and life-threatening as they are responsible for the loss of life of not only humans but also the flora and fauna in that region. They also reduce the value of property resulting from the loss of agricultural and forest productivity. In addition to this, landslides disrupt various transportation systems and pollute surface water.
Keeping these points in view, we are going to discuss one of the major...
11 Pages (2750 words) Term Paper

In th...
8 Pages (2000 words) Case Study
sponsored ads
Save Your Time for More Important Things
Let us write or edit the essay on your topic "Consumer law, warranties and conditions" with a personal 20% discount.
GRAB THE BEST PAPER

Let us find you another Essay on topic Consumer law, warranties and conditions for FREE!