Comments (0)
Add to wishlistDelete from wishlist
Cite this document
Summary
The Eighth Amendment to the U.S. Constitution Punishment forbids punishment for crimes which are considered cruel and unusual. This Eighth Amendment is often referred to when arguing the legal merits of capital punishment. The death penalty is regarded by some to be the most heinous and obvious example of cruel and unusual punishment. …
Download full paperFile format: .doc, available for editing
HIDE THIS PAPERGRAB THE BEST PAPER91% of users find it useful 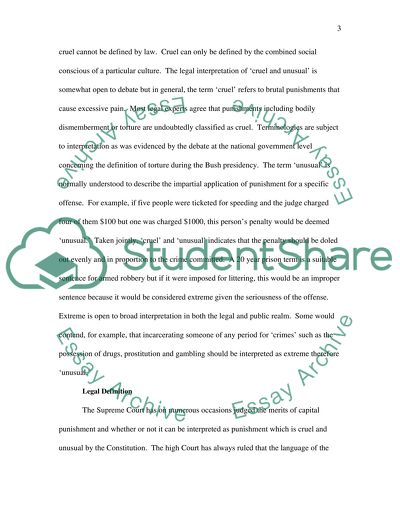 Download file to see previous pages Those who are opposed to capital punishment do not think that the government should be given the power kill any of its citizens. Opponents also claim that the custom is overtly costly, is racially biased and does not realize the intended outcome. Advocates consider it to be neither cruel nor unusual, quite the opposite they consider it fair and just punishment. The purpose of this paper is to discuss the moral and legal issues which are literally are of life and death significance and is a principal barometer when determining the collective conscience of a society. The ‘eye for an eye’ faction not only accepts but loudly insists that capital punishment be continued for several reasons which will be discussed thoroughly in this paper. It will also include the opponents’ reasoning concerning why it should be eradicated along with the legal precedents concerned so as to offer a thorough overview of the capital punishment debate. The discussion will end with an opinion concerning the future of the death penalty.
Cruel and Unusual
Common Definition
Capital punishment is not unusual, by legal definition, unless the racial bias existing within the justice system is considered and acknowledged. Whether or not it is cruel cannot be defined by law. Cruel can only be defined by the combined social conscious of a particular culture. The legal interpretation of ‘cruel and unusual’ is somewhat open to debate but in general, the term ‘cruel’ refers to brutal punishments that cause excessive pain. Most legal experts agree that punishments including bodily dismemberment or torture are undoubtedly classified as cruel. Terminologies are subject to interpretation as was evidenced by the debate at the national government level concerning the definition of torture during the Bush presidency. The term ‘unusual’ is normally understood to describe the impartial application of punishment for a specific offense. For example, if five people were ticketed for speeding and the judge charged four of them $100 but one was charged $1000, this person’s penalty would be deemed ‘unusual.’ Taken jointly, ‘cruel’ and ‘unusual’ indicates that the penalty should be doled out evenly and in proportion to the crime committed. A 20 year prison term is a suitable sentence for armed robbery but if it were imposed for littering, this would be an improper sentence because it would be considered extreme given the seriousness of the offense. Extreme is open to broad interpretation in both the legal and public realm. Some would contend, for example, that incarcerating someone of any period for ‘crimes’ such as the possession of drugs, prostitution and gambling should be interpreted as extreme therefore ‘unusual.’ Legal Definition The Supreme Court has on numerous occasions judged the merits of capital punishment and whether or not it can be interpreted as punishment which is cruel and unusual by the Constitution. The high Court has always ruled that the language of the Eighth Amendment does not prohibit death being implemented as punishment. The Constitution is a flexible document, however. The interpretation of cruel and unusual has evolved to some degree throughout the years and the Court might possibly reverse their viewpoint in the future due to changing societal values. For example, the whipping of criminals was routine until the late Eighteenth Century. This custom came to be considered unacceptable because society’s attitude changed to include whipping as a ‘cruel’ punishment. With respect to the death penalty however, “the Court has maintained that there remains broad public ...Download file to see next pagesRead More
Share:
Tags
Cite this document
(“Is Capital Punishment Effective Research Paper Example | Topics and Well Written Essays - 2500 words”, n.d.)
Retrieved de https://studentshare.org/law/1390506-argumentative-paper

CHECK THESE SAMPLES OF Is Capital Punishment Effective

Project planning involves a lot of factors and areas that we need to address for the effective management and handling of the project. The aim of this report is to provide a deep insight into some of the main areas that we need to address for the project of Adams's family farmhouse renovation. These issues are project team communication, project risk management, and deadline handling. Effective communication in a project provides a huge advantage regarding the better working and handling of the project. I have selected a very significant project regarding the preservation of the old and historical places. Here we require effective communication to provide better interaction among the designer, developers, and history preservation...
8 Pages(2000 words)Coursework
sponsored ads
Save Your Time for More Important Things
Let us write or edit the research paper on your topic "Is Capital Punishment Effective" with a personal 20% discount.
GRAB THE BEST PAPER

Let us find you another Research Paper on topic Is Capital Punishment Effective for FREE!