Comments (0)
Add to wishlistDelete from wishlist
Cite this document
Summary
As per reference to Keegan and Green, Nescafe coffee is well known internationally, and is marketed as a global brand, even though the advertisement depicts the social…
Download full paperFile format: .doc, available for editing
HIDE THIS PAPERGRAB THE BEST PAPER96.8% of users find it useful 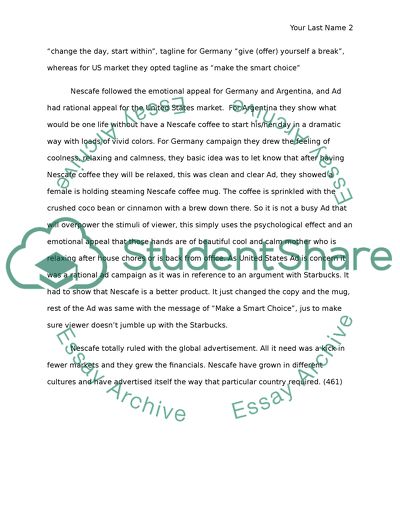 Nestle Nescafe global campaign is based on the following information Media Outlet: Print Media2. Media Year: 2009
Advertisements in countries simultaneously:
1. Argentina: “Change the day, Start within”
2. Germany: “Give Yourself a Break”
3. United States: “The Smart Choice”
Nescafe is an international company that employs the marketing strategy of “think globally, act locally”. As per reference to Keegan and Green, Nescafe coffee is well known internationally, and is marketed as a global brand, even though the advertisement depicts the social and cultural differences. Its marketing is well known because of the symbol the company used globally that is the RED Coffee mug with Nescafe logo on it. Nescafe has advertised with the native language for the particular target market of every country, as it was advertised globally. They used Spanish for Argentina market, English for US and German language for advertising in Germany, although rest of the Ad had the same symbols and logo throughout globally. The tag lines were entirely different as they were too solely tell the story about the particular country such as tagline or message for Argentina was “change the day, start within”, tagline for Germany “give (offer) yourself a break”, whereas for US market they opted tagline as “make the smart choice”
Nescafe followed the emotional appeal for Germany and Argentina, and Ad had rational appeal for the United States market. For Argentina they show what would be one life without have a Nescafe coffee to start his/her day in a dramatic way with loads of vivid colors. For Germany campaign they drew the feeling of coolness, relaxing and calmness, they basic idea was to let know that after having Nescafe coffee they will be relaxed, this was clean and clear Ad, they showed a female is holding steaming Nescafe coffee mug. The coffee is sprinkled with the crushed coco bean or cinnamon with a brew down there. So it is not a busy Ad that will overpower the stimuli of viewer, this simply uses the psychological effect and an emotional appeal that those hands are of beautiful cool and calm mother who is relaxing after house chores or is back from office. As United States Ad is concern it was a rational ad campaign as it was in reference to an argument with Starbucks. It had to show that Nescafe is a better product. It just changed the copy and the mug, rest of the Ad was same with the message of “Make a Smart Choice”, jus to make sure viewer doesn’t jumble up with the Starbucks.
Nescafe totally ruled with the global advertisement. All it need was a kick in fewer markets and they grew the financials. Nescafe have grown in different cultures and have advertised itself the way that particular country required. (461)
References:
Nescafe Argentina: http://adsoftheworld.com/media/print/nescafe_eyes
Nescafe Germany: http://marketing.blogs.ie.edu/archives/tag/nescafe
Nescafe United States: http://www.adpulp.com/instant_pretens/ Read More
Share:
Tags
Cite this document
(“Advertising Essay Example | Topics and Well Written Essays - 500 words - 2”, n.d.)
Retrieved from https://studentshare.org/journalism-communication/1582072-advertising

CHECK THESE SAMPLES OF Advertising

...? Advertisements have gone through drastic changes over the last half century, from black and white monotonous tones to vibrant and colorful tunes that stick in the heads of its viewers. Ads in the magazines have been a source of reach to the masses and have occupied household shelves since the 1950’s. Magazine ads have changed not only in their appearance but also in their content and intended audience. The way the message was pitched to the audience reflected the thinking of the masses of that era. Nowadays, although some brands continue to capture their target market with the same message they had 30 or 40 years ago, some brands have transformed radically in their approach and have given a new identity to their...
4 Pages(1000 words)Essay

...Power of Language Advertising Campaign I would like to do an advertising campaign that highlights the idea that language is powerful and people should know what they mean. This would take mostly the form of print advertising that replaces commonly used words, especially slurs that are replaced by a dictionary definition of the word or phrase. This could have a background of pictures of people who could be affected by the language. An example would be people simply throwing around words like “ghetto” in a derogatory way, without thinking of the fact that that could negatively affect people. The poster would say “man, that’s so ‘a part of a city, especially a slum, occupied by a...
1 Pages(250 words)Essay

...Advertising Advertising Advertising is a way of marketing that is non-personal in nature which persuades people to buy certain products or services. It usually uses media outlets to bring goods and services offered to the attention of consumers in a targeted market. The use advertising makes sure that an intended message reaches a large number of people within the targeted market. There are various forms of media used in advertising, but the uniting theme about them is that all of them try to pass the message in the most appealing way possible. Examples of advertising media include TV commercials, print advertising, and direct mailing. Advertising has changed over time, and advertising of the present time is not as the same... what...
2 Pages(500 words)Essay

...Advertising Task Introduction An advertisement is an element of making a commodity appealing in order to coax consumers into buying the product. Argument synthesis is the argument element whose intention is to convince reasonable people to agree to a claim. This study looks at argument synthesis as the principle applied by copywriters in advertisements. Argument Synthesis The applications of argument include ‘Logos’, ‘Ethos’ and ‘Pathos’ (Behrens & Rosen, 2011). These are key elements in advertising. Logos is the appeal to reason, ethos is the appeal to ethics and pathos is the appeal to emotion. An advertisement has three chief types of copy; that is,...
2 Pages(500 words)Essay

...American Telephone and Telegraph Company “Advertising” [Pick the Profile Introduction AT&T (American Telephone and Telegraph) Incorporation is an American multinational organization which is basically operating in telecommunication. The head quarter is situated in Whitacre Tower, downtown Dallas, Texas. In America, It is the leading telecommunication service provider in mobile services as well as fixed land line telephone services. It is the largest company in all over the Dallas while it is also included in the big five players of the market. Along with mobile and fixed land line services, it also provides broad band subscription services. By the calculated market value, it was declared as the 17th largest company in the...
10 Pages(2500 words)Essay

...Number: Lecturer: Advertising Introduction Advertising can be defined as an activity or act of promoting goods or services by drawing the interest of the public through electronic, print or broadcast media. Electronic media may include; use of television sets, radios for audio communication, the internet, smart phones, billboards, etc. print media may include; the use of magazines, newspapers, brochures, which can be printed and circulated physically to the public. Print media posses a permanent attribute since they can be kept for future use. When starting a business, advertisement is crucial for making the audience aware of the existence of any new product. Goods and services offered...
4 Pages(1000 words)Essay

...Marketing to Digital Natives DBQ After reading the six tips on marketing to digital natives discussed in the article, the two tips that I found important are Tip 1) Cater to Their Needs, and Tip 6) Be Everywhere. Tip 1 covers the key requirements to appeal the millennial agencies such as utility, entertainment, a source of information, and rewards. This is important because, for instance, utility will help the millennial streamline their days since they multi-task. Tip 6 covers the importance of product and brand awareness. This is important because targeting the current millennium is a challenging task. Companies who carry out their advertisement through social media networks such as Facebook and Twitter experience...
1 Pages(250 words)Essay

...Outline This paper explores the enticing aspect of ads to s, and how the ads create emotions and attitudes regarding the service or product in question and most probably the intended connection of feelings towards the product advertised. This paper will assume the following outline: 1.1 Introduction 1.2 Language and rationale of ads i. Need for Affiliation ii. Need for Sex iii. Strive to Achievement iv. Urge of Autonomy v. The Call for Security 1.3 Conclusion Surname Lecturer Course Date The attitude and emotional appeal of services and products’ advertisements 1.1 Introduction The rationale of advertisement is basically to create an appeal towards consumption and use of a given product or service. The notion is developed... on the...
4 Pages(1000 words)Essay

...Advertising ID] Advertising I’ll cook for you Introduction/ Situation Assessment/ Recommendation The memo aims to make recommendation about Darla’s venture ‘I’ll cook for you’ particularly in the area of advertising the business features. Considering the needs and resources of Darla it is recommended that she should hire an advertising agency in order to create awareness about her upcoming venture. This is recommended primarily on the basis of the fact that currently Darla is facing the recognition issues. She expects that her services of cooked food would be well accepted by her customers. However, reaching to the target market is the most significant task for her...
5 Pages(1250 words)Essay

... The Value of Advertising Introduction Advertising in simple terms refers to the process of relaying any form of commercial speech with the intention of generating awareness. And this can be a commercial language relating to new or already existing goods. The main work of this kind of speech in a free market environment or economy is to promote a product or service and make it more saleable. Despite the several regulatory concerns, consumers have been benefiting from marketing and advertisements (Clow, Kenneth & Donald Baack, 56). These positive gains introduce us to the topic of whether advertising has beneficial effects on the individuals, community and society as a whole. My main argument bases on the fact that Advertisement... is...
2 Pages(500 words)Essay
sponsored ads
Save Your Time for More Important Things
Let us write or edit the essay on your topic "Advertising" with a personal 20% discount.
GRAB THE BEST PAPER

Let us find you another Essay on topic Advertising for FREE!