Comments (0)
Add to wishlistDelete from wishlist
Cite this document
Summary
The aim of this assignment "Understanding of Interpersonal Communication" is to shed light on the process of interpersonal communication and factors that shape it as well as to analyze particular approaches to it. Furthermore, the writer will emphasize how does culture affect language use…
Download full paperFile format: .doc, available for editing
HIDE THIS PAPERGRAB THE BEST PAPER91.2% of users find it useful 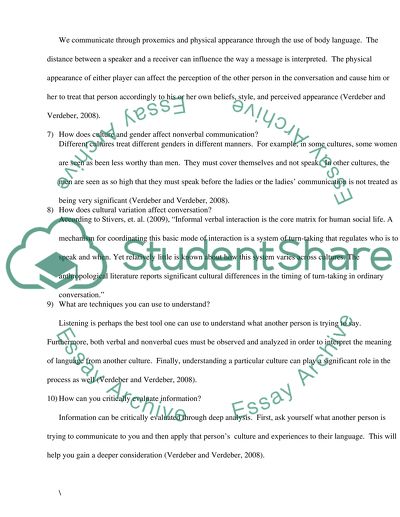 1) How does the interpersonal communication process work According to Buzzle.com , "Interpersonal communication is the process that helps us express our feelings, ideas, and thoughts and share them with the people around us. Efficient interpersonal communication is a very good quality that helps people in every aspect of life be it personal or professional. Interpersonal communication is the process where a person expresses his thoughts, converts the thoughts into a well designed message and sends the message across a communication channel (oral, visual, written, etc) and the receiver receives the message and responds to the message and sends his reply back via the communication channel."
2) What is communication competence
When a communicator fully achieves his or her communicative goal through the proper channels and techniques of communication, he or she is said to have achieved communication competence (Verdeber and Verdeber, 2008).
3) What methods can we use to improve the accuracy of social perception
Understanding why and how people say what they do deals with the accuracy of social perception. Start by asking yourself why a person does what he or she does. Overall, it can be obtained through analyzing the way in which others behave (Verdeber and Verdeber, 2008).
4) What is the relationship between language and perception
It is well known that language shapes perception. The way a person speaks influences how others perceive that person. Language affects the very thought process, which includes perception (Verdeber and Verdeber, 2008).
5) How does culture affect language use
Language use differs across various cultures both through linguistic and non-linguistic clues. Differing situations influence the way a language is learned. It also affects the way that language is interpreted. Differing mechanisms or categories during this process also play a role. The way in which a person was raised in his or her culture affects the way that person uses and interprets language (Verdeber and Verdeber, 2008).
6) How do we communicate through proxemics and physical appearance
We communicate through proxemics and physical appearance through the use of body language. The distance between a speaker and a receiver can influence the way a message is interpreted. The physical appearance of either player can affect the perception of the other person in the conversation and cause him or her to treat that person accordingly to his or her own beliefs, style, and perceived appearance (Verdeber and Verdeber, 2008).
7) How does culture and gender affect nonverbal communication
Different cultures treat different genders in different manners. For example, in some cultures, some women are seen as been less worthy than men. They must cover themselves and not speak. In other cultures, the men are seen as so high that they must speak before the ladies or the ladies' communication is not treated as being very significant (Verdeber and Verdeber, 2008).
8) How does cultural variation affect conversation
According to Stivers, et. al. (2009), "Informal verbal interaction is the core matrix for human social life. A mechanism for coordinating this basic mode of interaction is a system of turn-taking that regulates who is to speak and when. Yet relatively little is known about how this system varies across cultures. The anthropological literature reports significant cultural differences in the timing of turn-taking in ordinary conversation."
9) What are techniques you can use to understand
Listening is perhaps the best tool one can use to understand what another person is trying to say. Furthermore, both verbal and nonverbal cues must be observed and analyzed in order to interpret the meaning of language from another culture. Finally, understanding a particular culture can play a significant role in the process as well (Verdeber and Verdeber, 2008).
10) How can you critically evaluate information
Information can be critically evaluated through deep analysis. First, ask yourself what another person is trying to communicate to you and then apply that person's culture and experiences to their language. This will help you gain a deeper consideration (Verdeber and Verdeber, 2008).

CHECK THESE SAMPLES OF Understanding of Interpersonal Communication

Marx was born a German Jew but lived most of his life in England and France. In these countries, the prevailing liberal political philosophy viewed the concept of freedom as the right for people to make their own choices regarding their lives and property. In today’s terms, this...

Communication is part of everyday life. It is not limited to adults or learned individuals. Babies communicate with their mothers as they cry when they are hungry, the mute use sign language to express what they want to say, while the mentally disabled laugh when they are happy or excited. The forms of communication people use may vary but common elements are usually present. These include the message and the communicators or the participants who play the role of either the sender or receiver of the message. In the communication situation, I had with my friend, these common features were present along with others namely, feedback, noise, context, and mutual agreement/negotiation. These elements affected the outcome of the conversa...
12 Pages(3000 words)Case Study
sponsored ads
Save Your Time for More Important Things
Let us write or edit the assignment on your topic "Understanding of Interpersonal Communication" with a personal 20% discount.
GRAB THE BEST PAPER

Let us find you another Assignment on topic Understanding of Interpersonal Communication for FREE!