Comments (0)
Add to wishlistDelete from wishlist
Cite this document
Summary
The author of this book report entitled "Polymorphic Viruses" casts light on the numerous innovations, which include computer science and information technology. It is mentioned that this paper examines the concept of polymorphic viruses in computer science. …
Download full paperFile format: .doc, available for editing
HIDE THIS PAPERGRAB THE BEST PAPER92.2% of users find it useful 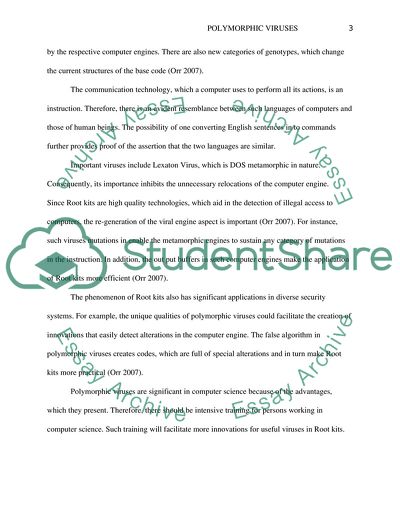 ﻿Polymorphic Viruses
The contemporary society has numerous innovations, which include computer science and information technology. This paper examines the concept of polymorphic viruses in computer science. In particular, the paper offers a summary, which depicts a personal impression on an article called, The Molecular Virology of Lexotan32 (Orr 2007). Finally, the application of the article to Root kits is evident in the paper.
There is an evident replacement of instructions in order to monitor the growth of the code in the consequent regenerations. The growth of the code presents numerous challenges since one cannot control the insertion of irrelevant instructions. Therefore, it is remarkable to note that there were creative manners of solving such challenges by using the present viruses. Through the TMC, unique creation of tables that accumulated lengthy binary commands of the virus was evident. In addition, the uniqueness in the composition of the present binary results in beautiful Lexaton viruses (Orr 2007).
Consequently, such polymorphic viruses contain unique word values, which facilitate the correct directions of preceding commands. In addition, the aspects of virus mutations enable the computer engine to execute diverse transformations, which are reversible. The flow of these coded transformations generates garbage. Indeed, such garbage happens immediately and takes any size, for example, 8 bit (Orr 2007).
It is significant to note that after the completion of these transformations, notable relocations of the viruses occur. Such relocations come from the constant copying of instructions by the respective computer engines. There are also new categories of genotypes, which change the current structures of the base code (Orr 2007).
The communication technology, which a computer uses to perform all its actions, is an instruction. Therefore, there is an evident resemblance between such languages of computers and those of human beings. The possibility of one converting English sentences in to commands further provides proof of the assertion that the two languages are similar.
Important viruses include Lexaton Virus, which is DOS metamorphic in nature. Consequently, its importance inhibits the unnecessary relocations of the computer engine.
Since Root kits are high quality technologies, which aid in the detection of illegal access to computers, the re-generation of the viral engine aspect is important (Orr 2007). For instance, such viruses mutations in enable the metamorphic engines to sustain any category of mutations in the instruction. In addition, the out put buffers in such computer engines make the application of Root kits more efficient (Orr 2007).
The phenomenon of Root kits also has significant applications in diverse security systems. For example, the unique qualities of polymorphic viruses could facilitate the creation of innovations that easily detect alterations in the computer engine. The false algorithm in polymorphic viruses creates codes, which are full of special alterations and in turn make Root kits more practical (Orr 2007).
Polymorphic viruses are significant in computer science because of the advantages, which they present. Therefore, there should be intensive training for persons working in computer science. Such training will facilitate more innovations for useful viruses in Root kits.
References
Orr. (2007). The Molecular Virology of Lexotan32. Metamorphism Illustrated Read More
Share:
Tags
Cite this document
(“Polymorphic Viruses Book Report/Review Example | Topics and Well Written Essays - 500 words”, n.d.)
Polymorphic Viruses Book Report/Review Example | Topics and Well Written Essays - 500 words. Retrieved from https://studentshare.org/information-technology/1777978-polymorphic-viruses

CHECK THESE SAMPLES OF Polymorphic Viruses

...?Viruses, Mononucleosis, and Immune System Viruses Viruses are tiny bits of genetic material wrapped in a protective protein coat and is considered as the simplest living things on Earth. It is also known as the ultimate parasites and depends primarily on the host (Goldstein, 4). The structure of viruses has particles called virions and is constructed with helical symmetry containing only one protein or very few proteins (Strauss & Strauss, 36). Viruses that are simple and regular in structure often crystallize which have made them suitable for X-ray diffraction. Unlike all living things, viruses are not cells. They are called parasites because they cannot do anything without a host and cannot carry out their own life functions just like...
2 Pages(500 words)Research Paper

...? Viruses Viruses are living organisms that are smaller than bacteria and are generally responsible for a number of infectious diseases and even life threatening diseases. They have the ability to replicate themselves within the human cell and this process of reproduction takes place at a very fast rate and therefore diseases caused by viruses gain strength quickly. Viruses are the tiniest of organisms and yet they have the power and strength to attack all other organisms including human, animals, plants, bacteria, etc. The viruses are almost hundred times smaller than a bacteria cell which themselves are quite tiny. There are millions of types of viruses present in the world. A few thousands have been explained and studied in detail...
5 Pages(1250 words)Research Paper

...? Are viruses alive? Introduction Viruses are microscopic agents that survive only in the nucleus of cells of other living organisms. This implies that viruses live in any living thing both plants and animals. They replicate inside the cells and, in some advanced cases, they feed on the nucleus of the cells thus resulting in the death of the cells. Viruses have unspecified structure of deoxyribonucleic acid commonly referred to as the DNA (Dilcher, 2000). The DNA defines the structure of cells, the fact that viruses have indefinite DNAs makes them capable of changing their structure from time to time thus making it difficult for the body cells to identify and remove them from the cell structures. Among the most notorious virus is the Human...
7 Pages(1750 words)Essay

The most commonly noticed forces in crystals are the weak Van der waals forces. Consequently, the melting point of crystals is never very high (1, 2).
Structures of many substances, including crystals, vary with temperature. This ability of various substances to exist in more than one form is known as Polymorphism. Allotropy is a synonym for polymorphism and is usually used in the context of elements. Dimorphism is the word reserved for a substance that exists in two forms. Yet another definition exits for polymorphism. It also refers to the multiple crystals that might form owing to improper solvents used during the process of crystallization.
Structures of almost all substances consist of bonds, which can be inte...
9 Pages(2250 words)Essay

...VIRUSES ARE LIVING ORGANISMS Viruses are living organisms or not This has been a major topic of debate for decades now because while some argue thatviruses are alive, others contradict this claim on the basis on how we define life. We believe something is alive when it displays the following characteristics: Breathes Shows irritability Grows Move Reproduce With Viruses however, we find that they do not display 4 of the 5 characteristics of living organisms but most definitely reproduce and can adapt to their environment. Does that mean they are alive This is a million dollar question and the answer is rather complex. Viruses are not as alive as bacteria because bacteria are proven to contain DNA which is missing in Viruses. However...
3 Pages(750 words)Research Proposal

...Order 239492 EMERGING VIRUSES: NOT ALIVE, BUT POTENTIALLY FATAL Introduction Up-and-coming strains of animal viruses are more lethal despite thefact that these microscopic things are non-living and acellular (Engelkirk and Burton, 2007). Practically, increased virulence and pathogenicity of new viruses can be ascribed to their expressed characteristics called phenotypes. These new phenotypes are actually the end result of their evolved genetic material, which is either one of the two nucleic acids, DNA or RNA (Engelkirk and Burton, 2007). There could only be one usual reason for the evolution of viruses DNA or RNA akin to evolution of other living things. Obviously, it is adaptation which ensures continuity of its kind. Body While...
2 Pages(500 words)Essay

...VIRUSES AND CANCER By Janice Wotherspoon, BSW Submitted November 23, 2005 Section: Semester: Year: The purpose of this report is to examine information about the link several prominent researchers have found to exist between viruses and cancer. According to the evidence found by researching the internet it appears there is a definite need for women to be cognizant of the risks for developing cervical cancer if they are exposed to specific viruses. Details of research conducted by Darron R. Brown and colleagues from the Indiana University School of Medicine(1) and a series of collaborative studies between Drs. James McDougall, Janet Daling, Steve Schwartz, Peggy Porter, and Denise Galloway of the Hutchinson Center (3) have all provided...
4 Pages(1000 words)Essay

...Viruses Viruses are pieces of biological machinery that have no real consciousness of their own. They consist of some form of genetic material that is housed in a protein coat and is usually lined with protein receptors for attaching to hosts. In certain cases, viruses are responsible for keeping organism populations under control. In addition, viruses can be a mechanism for evolution. When viruses inject their genetic material into a host cell, the genes are integrated into the genome structure of the organism. Depending on whether the host cell enters the lytic or lysogenic cycle, the transfer of genetic material can either cause mutation within the virus or in the organism itself. Scientists had hypothesized that one of the ways...
1 Pages(250 words)Assignment

...﻿Microbiology BIO Cytomegalovirus-immunocompromised host (CMV) is a type of virus that belongs to the Herpes viruses. The virus causes diseases in different parts of human beings bodies such as the Cytomegalovirus retinitis disease. The CMV infections occurs in individuals whose immune system has been weakened by AIDS, organ transplant, chemotherapy, bone marrow transplants or medicines that are capable of suppressing the immune system. A CMV infection affects different parts of the body such as the esophagus, the stomach, the intestines, eye and the lungs. Once the CMV enters a person’s body, it remains alive and dominant within the host’s body. This virus can only cause diseases only when the host immune system is suppressed because...
1 Pages(250 words)Assignment

...MB12 – Review Questions on Viruses What are some properties of viruses that distinguish them from living cells? A living cell is capable of independent metabolism whereas viruses are dependant on a living cell for being alive. They are incapable of reproduction without enzymes of the host cell and they make use of the metabolized products of the host like ATP for its vital functions. 2. What is the general structure of a non-enveloped virus? What about enveloped viruses? Non enveloped viruses have a nucleic acid covered by a capsid layer whereas enveloped viruses have a phospholipid bilayer derived from the host cell that it infected covering its nucleic acid and capsid layer. 3. What creates the specificity of a virus for its host...
16 Pages(4000 words)Assignment
sponsored ads
Save Your Time for More Important Things
Let us write or edit the book report/review on your topic "Polymorphic Viruses" with a personal 20% discount.
GRAB THE BEST PAPER

Let us find you another Book Report/Review on topic Polymorphic Viruses for FREE!