Comments (0)
Add to wishlistDelete from wishlist
Cite this document
Summary
This paper "Identity Perception in the Virtual World" deals with defining the nuances of identity perception in the virtual world. This essay will describe what identity is. It will develop the human relation setting within which the analysis will be conducted and descriptions put forth. …
Download full paperFile format: .doc, available for editing
HIDE THIS PAPERGRAB THE BEST PAPER95.3% of users find it useful 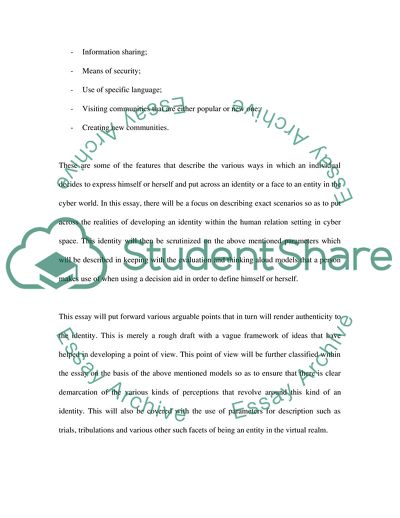 Extract of sample "Identity Perception in the Virtual World"

Download file to see previous pages The above-mentioned points are a few of the choices that face people when creating their own identity on the Internet or within cyberspace. This is where the use of decision aids comes in as far as the following points are concerned:
These are some of the features that describe the various ways in which an individual decides to express himself or herself and put across an identity or a face to an entity in the cyber world. In this essay, there will be a focus on describing exact scenarios so as to put across the realities of developing an identity within the human relation setting in cyberspace. This identity will then be scrutinized on the above-mentioned parameters which will be described in keeping with the evaluation and thinking aloud models that a person makes use of when using a decision aid in order to define himself or herself.

This essay will put forward various arguable points that in turn will render authenticity to the identity. This is merely a rough draft with a vague framework of ideas that have helped in developing a point of view. This point of view will be further classified within the essay on the basis of the above-mentioned models so as to ensure that there is a clear demarcation of the various kinds of perceptions that revolve around this kind of identity. This will also be covered with the use of parameters for description such as trials, tribulations and various other such facets of being an entity in the virtual realm.

CHECK THESE SAMPLES OF Identity Perception in the Virtual World

... Virtual World: Friendship Online Social Networks or Social Networking services have eventually become a part of everyone’s daily lives in the modern world of today. Social networks or social networking services can be defined as online facility or an online stage or a website which lays its focuses on the establishment and framing of social networks. Under these social networks, the people who are a part of them, get linked with each other, virtually. They may share backgrounds, interests and habits online. Apart from this, they may make use of the additional services offered online, such as joining of groups or communities. Social networks are mostly established over the World Wide Web and give the users an opportunity to interact...
5 Pages(1250 words)Research Paper

Working in a Virtual World

...on the basis of the above mentioned models so as to ensure that there is clear demarcation of the various kinds of perceptions that revolve around this kind of an identity. This will also be covered with the use of parameters for description such as trials, tribulations and various other such facets of being an entity in the virtual realm. Identity Perception in the Virtual World With an increase in the phenomenon known as globalization and the wide use of technology as a complementary feature, human society has changed and the needs have increased manifold. Changes in the political, economical and cultural arena have...
9 Pages(2250 words)Essay

Organising in a virtual world

...Organizing in a virtual world. ID: Word count:2,118 Table of contents: Introduction....2 Emergence of social networking sites....3 Facebook and its part in the virtual world......4 Facebook's structure and comparison to non-virtual organizations....9 Conclusion.10 References.11 Introduction: As the world ties itself closer together through concepts like globalization, the use of technology improves to fulfill the needs of the burgeoning world. As new changes are made in technology everyday, it becomes easier for the ordinary worker to be able to afford a lot of new equipment and knowledge available in the market. The new market caters to users under any age and class. As improvements are made, the need...
7 Pages(1750 words)Essay

COMMUNITY AND THE VIRTUAL WORLD

world, virtual communities are known to begin their life cycles as visitors or lurkers who by and by break existing communication barriers to become participating novices. Community visitors basically do not actively contribute for reasons among which include: seeking to learn about the community first, inability to use existing computer software, and dislike of observed group dynamics. Some simply relax as they receive all the information they need without having to actively participate while others may also nature the thought that by not contributing, they are being helpful to the group.
After the novice participates for a sustained period he/she becomes a regular member then later graduates to become a leader. Later, leade...
4 Pages(1000 words)Research Paper

Identity and Nonverbal Communication in the Virtual World

...Identity and Nonverbal Communication in the Virtual World The introduction of virtual worlds through social media interface and video games has created a different dimension for interpersonal communication to develop. A common feature of a virtual world is the creation of a personal avatar. An avatar is supposed to be a virtual character representation of the self. An avatar can be created and designed with attributes and form based on the preference of the person as creator. Usually, avatars are designed and personalized the way an individual wishes it to be. People engage in this as a way to appear more confident, and to place a degree of their personality upon their avatar. This becomes apparent in virtual role-playing games...
1 Pages(250 words)Essay

The use of social media in organizations is proliferating. More importantly, social media have found a crucial role in improving and advancing learning in the workplace through collaboration among employees. As such, it is more relevant in this context to refer to social media tools as collaborative media because of the important role they play and intention in organization learning (Thomas & Akdere, 2013).
Many companies are using media spaces such as web 2.0 to enhance collaborative learning. The companies develop personal social networks that allow employees to share and collaborate with each other. The BASF is an example of an industrial company that developed an internal social business platform that ensured sharing...
1 Pages(250 words)Essay

...Annotated Bibliography: Virtual World Teaching al Affiliation Annotated Bibliography: Virtual World Teaching Castillo, A. (2014, May 22). Virtual Reality and Education | Teaching Commons. Retrieved from https://teachingcommons.stanford.edu/teaching-talk/virtual-reality-and-education Anna Castillo is a writer and reporter with Stanford News Service. She has written different articles in different areas, education being one of them. In this article, she offers her own experience with regard to virtual world teaching and its effect on education. She offers an analysis into an experience she got inside a Virtual Human Interaction Lab (VHIL) at Stanford University. She analyzes the use of virtual reality gadgets and 3-D television...
4 Pages(1000 words)Annotated Bibliography

The Study of Virtual World

This has been fueled by governments giving patents to web companies to privatize knowledge, thereby, giving them the mandate to own knowledge.
Frequent innovations on how to own knowledge often lead to people being limited to certain knowledge content, while being restricted from accessing alternative knowledge. This often leads to a knowledge monopoly by big companies such as Google and Facebook. Analysts predict that if this trend continues, the public will lose access to crucial information, thus undermining their democratic right to access information. Democracy in this sense implying the public’s right to access information, freedom of expression and speech, while not undermining press freedom. As a result, people...
7 Pages(1750 words)Literature review
sponsored ads
Save Your Time for More Important Things
Let us write or edit the essay on your topic "Identity Perception in the Virtual World" with a personal 20% discount.
GRAB THE BEST PAPER

Let us find you another Essay on topic Identity Perception in the Virtual World for FREE!