Comments (0)
Add to wishlistDelete from wishlist
Cite this document
Summary
Born in San Franscisco, California, on February 24, 1955, was not new to the world of technology because his birthplace eventually came to be known as the Silicon Valley, the…
Download full paperFile format: .doc, available for editing
HIDE THIS PAPERGRAB THE BEST PAPER92.9% of users find it useful 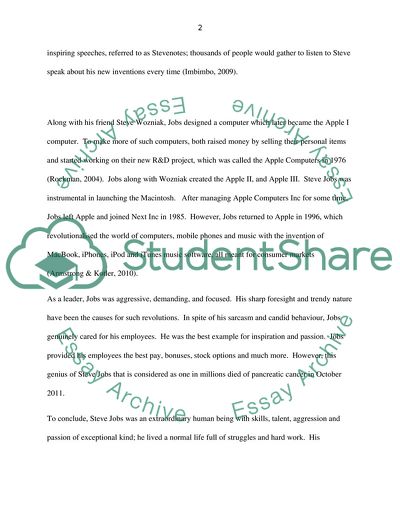 Steve jobs Steve Jobs is regarded as an iconic figure that revolutionized the world of computer and mobile phones. Born in San Franscisco, California, on February 24, 1955, was not new to the world of technology because his birthplace eventually came to be known as the Silicon Valley, the house of innovation and technology (Lemke, 2007). This indicates how much Jobs was influenced by and inclined towards computers and technology. Jobs were adopted by Paul Jobs, a car mechanic, and Clara Jobs from his biological mother. In his interview with Morrow (1995), Jobs revealed that his experience with experimenting on electronic items began when he was about 5 years with his father’s support and guidance; this experience rooted curiosity, passion and experimentation attitude in Jobs.
Steve Jobs was known to have an incredibly curious nature; was a quick learner and had a great love for reading. As a child, Jobs was strongly determined, stubborn, and highly focused on things what interested him rather than what he was meant to do. His interest in electronics kept intensifying as time passed, which earned him friends with similar interests (Imbimbo, 2009). Steve’s first introduction to the world of computers happened when he was 12, at Hewlett-Packard office, which fascinated him to the core, and was the root cause of the revolution he later brought into the world of computers. Apart from electronics, Steve had an inclination towards music and played trumpet. He had a flair for artistic things, for example, calligraphy, which later helped him to design fonts for the Macintosh computer. Jobs was known for his inspiring speeches, referred to as Stevenotes; thousands of people would gather to listen to Steve speak about his new inventions every time (Imbimbo, 2009).
Along with his friend Steve Wozniak, Jobs designed a computer which later became the Apple I computer. To make more of such computers, both raised money by selling their personal items and started working on their new R&D project, which was called the Apple Computers in 1976 (Rockman, 2004). Jobs along with Wozniak created the Apple II, and Apple III. Steve Jobs was instrumental in launching the Macintosh. After managing Apple Computers Inc for some time, Jobs left Apple and joined Next Inc in 1985. However, Jobs returned to Apple in 1996, which revolutionalised the world of computers, mobile phones and music with the invention of MacBook, iPhones, iPod and iTunes music software, all meant for consumer markets (Armstrong & Kotler, 2010).
As a leader, Jobs was aggressive, demanding, and focused. His sharp foresight and trendy nature have been the causes for such revolutions. In spite of his sarcasm and candid behaviour, Jobs genuinely cared for his employees. He was the best example for inspiration and passion. Jobs provided his employees the best pay, bonuses, stock options and much more. However, this genius of Steve Jobs that is considered as one in millions died of pancreatic cancer in October 2011.
To conclude, Steve Jobs was an extraordinary human being with skills, talent, aggression and passion of exceptional kind; he lived a normal life full of struggles and hard work. His determination and passion have exemplified human potential and imagination beyond the possibilities of current world.
References
Imbimbo, A. 2009. Steve Jobs: The brilliant mind behind Apple. New York: Gareth Stevens.
Armstrong, G and Kotler, P. 2010. Principles of marketing: A south Asian perspective. 13th ed.
New Delhi: Pearson Education.
Lemke, D.B. 2007. Steve Jobs, Steven Wozniak, and the Personal Computer. Minnesota:
Capstone Press.
Morrow, D.S. (1995). Steve Jobs Oral History: Transcript of a Video History Interview with
Steve Jobs. April 20, 1995. Available from http://www.cwheroes.org/archives/histories/jobs.pdf (Accessed October 28, 2011).
Rockman, H.B. 2004. Intellectual property law for engineers and scientists. New Jersey: John
Wiley & Sons. Read More
Share:
Tags
Cite this document
(“Steve Jobs Assignment Example | Topics and Well Written Essays - 500 words”, n.d.)
Steve Jobs Assignment Example | Topics and Well Written Essays - 500 words. Retrieved from https://studentshare.org/information-technology/1582820-steve-jobs

CHECK THESE SAMPLES OF Steve Jobs

...?ABC XYZ Management 15 April Steve Jobs Steve Jobs was one of the most visionary business leaders. He cofounded Apple with Steve Wozniak in the year 1976 and had to leave the organization in the year 1985. He again rejoined Apple in the year 1997 when Apple was at the brink of bankruptcy and has led the firm to become one of the leading technology organizations in the world. During this brief period, Jobs strived to modify seven industries: animated movies, personal computing, music, retail stores, tablet computing, digital publishing and phones. He is not only a great visionary and a leader but one of the foremost innovators of modern...
15 Pages(3750 words)Essay

...? STEVE JOBS ENTREPRENEURIAL SKILLS Steve Jobs Entrepreneurial Skills Steve Jobs, due to his overwhelming success as the chief executive officer of Apple Corporation has become a point of reference by many researchers who have carried out studies on business management and entrepreneurial skills. His way of thinking and doing things is what makes him unique from other business leaders. Mostly, he is referred to as a simple but creative thinker who spends considerable time in evaluating a simple feature about a product. It is the simplest things that people take for granted that are his major area of concern to him. Jobs...
4 Pages(1000 words)Essay

...?Introduction: Company C.E.O; entrepreneur; visionary man; revolutionary head behind the major electronic component that we have around us; all thesedefine one person and that is Steve Jobs. Very few people have left an influence in terms of their scientific and technological contributions in the 20th century. One of those personalities includes Steve Jobs. Despite his demise the whole of technological world is engulfed into inventions and ideas that were introduced and then patented by the man himself, and despite his demise the company Apple Inc. enjoys supremacy in the field of electronics and gadgets against its competitors. Steve...
9 Pages(2250 words)Essay

...?Full The Icon of Technology Steven Paul Jobs, more popularly known as Steve Jobs, is an iconic figure in the world of technology. Modern civilization requires the use of technology as part of daily living so that it has become an important part of every individual. The technological advancements introduced by Jobs not only defines modern creativity but has marked the way people live. Communications has become better. Entertainment also reached a better level of delivering high quality pictures in theaters as well as home videos. Nevertheless, those are not the only qualities that make Jobs stand out among the crowd. He is one of the rare people who make...
3 Pages(750 words)Essay

...Steve Jobs Steve Jobs, the co-founder and CEO of Apple is one of the prominent American business magnates. His major achievements include the production and marketing of personal computers of commercial value, known as Apple II, Macintosh, and other innovations like iPod and iMac. Although Jobs had resigned from Apple due to some managerial problems with the board of directors, later in 1997 he rejoined the Apple Computer Inc, as its CEO. In addition, he is currently serving as one of the members of the Walt Disney Company’s Board of Directors. What made him a successful business entrepreneur is his outstanding vision and tactical...
2 Pages(500 words)Research Paper

...Steve Jobs: the Entrepreneur of the Decade Year) Steve Jobs: the Entrepreneur of the Decade Introduction SteveJobs, the co-founder and CEO of Apple is a prominent American business magnate who always surprises the world with his unusual leadership tactics and innovative ideas on product design. He altered the business field of computers by introducing a series of Apple products which are highly unique for their advanced features and aesthetic appeal. As the Fortune Magazine states, “the past decade in business belongs to Jobs” (Lashinsky). What makes him the icon of the modern business entrepreneur is a controversial subject among business management...
5 Pages(1250 words)Term Paper

...Steve Jobs Steve Jobs revolutionized the world of technology and simplified the lives of billions everyday. With his passing away, the world has witnessed a paradigm shift of sorts. Steve Jobs was an inventor and a business magnate. He was the co-founder of Apple Inc. who also became the Chairman and the Chief Executive Officer afterwards. His early life included his birth in San Francisco. He moved to California when he was just 5 years old. His birth parents included his father who hailed from Syria and an American mother of German descent. He was adopted by Paul and Clara Jobs, who lives in America. It was in 1976...
2 Pages(500 words)Essay

...Steve Jobs Lives Steve Jobs Lives Steve Jobs is considered by many as one of, if not, the greatest innovators thatever lived. His father was Abdulfattah Jandali while his mother was Swiss-American (Wikipedia par.6). His father and his mother met while they were students at the University of Wisconsin when they were both still students there. He was born on February 24th in 1955 in San Francisco California. When Steve Jobs was born, Jandali was teaching in that university; He said he had to put up the baby for adoption since the family of his did not approve of their relationship. Jobs was...
4 Pages(1000 words)Research Paper

...Steve Jobs How he became famous Steven Paul Jobs (1955 is a former CEO and co-founder of Apple Inc and Pixar Inc. During his entire work life, it is clear that Jobs is a transformational leader depicted in his style of leadership. Analysts characterize his leadership style as transformational to the extent Jobs becomes a paradigm case. The memory of his life and work will stand to shape how people think concerning transformational leadership. He was born on 24 February 1955 in San Francisco to Joanne Schieble and Abulfattah Jandali when they were students at University of Wisconsin. Joanne’s father did not approve the marriage and Steve...
6 Pages(1500 words)Essay

...Steve Jobs Fouziah Nasser HST 370 Dr. Schweikart Friday, March 20, I am writing this paper now using my Apple, MacBook pro, laptop. I read books and watch movies at nights using my thin, average size, and high quality device called iPad. I call my family and friends almost weekly using Facetime, the service that is offered by Apple, that allows all Apple products users to make either video or voice calls anytime anywhere for free! All of these great services go back to Steve Jobs, the person who has been known for his unprecedented innovations and the unforgettable Apple. Steve Jobs is an American entrepreneur who was born in California...
1 Pages(250 words)Essay
sponsored ads
Save Your Time for More Important Things
Let us write or edit the assignment on your topic "Steve Jobs" with a personal 20% discount.
GRAB THE BEST PAPER

Let us find you another Assignment on topic Steve Jobs for FREE!