Comments (0)
Add to wishlistDelete from wishlist
Cite this document
Summary
The paper "Network Usage to Support National Defence of the UK" highlights that the need to protect information and monitor the same is solely a government responsibility. This is because no other body can be entrusted with the security of people and in a common ground…
Download full paperFile format: .doc, available for editing
HIDE THIS PAPERGRAB THE BEST PAPER98.1% of users find it useful 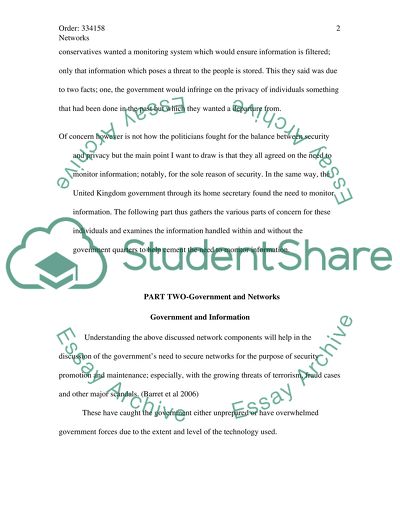 Download file to see previous pages An essay is based on the primal reasons for the government to regulate and examine information gathered or communicated by individuals either within the country or without. In line with the thesis statement, this essay is essentially centred at providing information/evidence as to why the government should be solely in charge of networks that keep the various communications within a country. To form a valid argument, we will examine the United Kingdom's pursuit to control information.
The United Kingdom government has always been faced with the need to secure information within the country mainly to help ensure that no threat is forthcoming at least not through the communication networks. This has been a debate for a long time and has seen the two main parties in the Kingdom draw various opinions. While the labour party wanted the formation of a single database for storing individual communications, the conservatives wanted a monitoring system which would ensure information is filtered; only that information which poses a threat to the people is stored. This they said was due to two facts; one, the government would infringe on the privacy of individuals something that had been done in the past but which they wanted a departure from.
Of concern however is not how the politicians fought for the balance between security and privacy but the main point I want to draw is that they all agreed on the need to monitor information; notably, for the sole reason of security. In the same way, the United Kingdom government through its home secretary found the need to monitor information. The following part thus gathers the various parts of concern for these individuals and examines the information handled within and without the government quarters to help cement the need to monitor information.
PART TWO-Government and Networks
Government and Information
Understanding the above-discussed network components will help in the discussion of the government's need to secure networks for the purpose of security promotion and maintenance; especially, with the growing threats of terrorism, fraud cases and other major scandals. (Barret et al 2006)
These have caught the government either unprepared or have overwhelmed government forces due to the extent and level of the technology used.
This necessities that the government prepares fully for such occurrences or situations and since it is usually not possible to harness the entire human knowledge and make use of the same in developing government networks, it is then important for it to ensure that the information and methods used by these outside developers are monitored or regulated. Notice that the use of outside developers means those that are not part of the government.
The other point of concern is that the corporate, as well as the entire private sector, has embarked in developing powerful technological equipment that enables the coding and encoding of data transported to allies of these companies or entities. If this is not monitored, then the security of the nation is likely to be in jeopardy as this information if not traced or decrypted, may contain matters likely to affect the well being of the society. ...Download file to see next pagesRead More
Share:
Tags
Cite this document
(Network Monitoring Essay Example | Topics and Well Written Essays - 1750 words, n.d.)
Network Monitoring Essay Example | Topics and Well Written Essays - 1750 words. https://studentshare.org/information-technology/1505018-network-monitoring
(Network Monitoring Essay Example | Topics and Well Written Essays - 1750 Words)
Network Monitoring Essay Example | Topics and Well Written Essays - 1750 Words. https://studentshare.org/information-technology/1505018-network-monitoring.
“Network Monitoring Essay Example | Topics and Well Written Essays - 1750 Words”. https://studentshare.org/information-technology/1505018-network-monitoring.
Comments (0)
Click to create a comment or rate a document

Addition to Prescription Drugs among the Elderly: A Right under Physician Monitoring

Mandatory Monitoring of Childrens Internet and Social Networking Activities in the U.S

14 Pages(3500 words)Assignment
sponsored ads
Save Your Time for More Important Things
Let us write or edit the essay on your topic "Network Usage to Support National Defence of the UK" with a personal 20% discount.
GRAB THE BEST PAPER

Let us find you another Essay on topic Network Usage to Support National Defence of the UK for FREE!