Comments (0)
Add to wishlistDelete from wishlist
Cite this document
Summary
The paper aims at interrogating the causes of civil war from the collected data from 1960-99. It identifies the role of greed using greed theory in establishing actual causes that led to the massive loss. The personal greed was greater determinants that spark the wave of civilian unrest…
Download full paperFile format: .doc, available for editing
HIDE THIS PAPERGRAB THE BEST PAPER91.9% of users find it useful 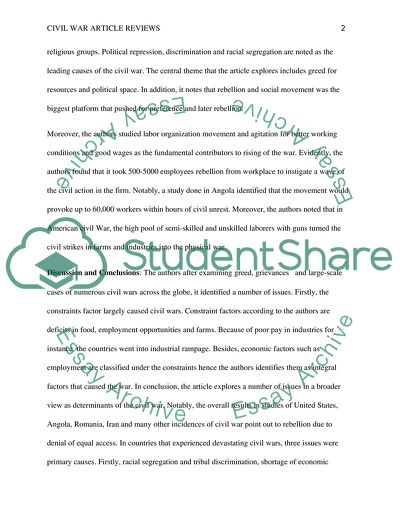 Extract of sample "Greed and Grievance in Civil War"

﻿Greed and Grievance in Civil War
Purpose: The article aims at interrogating the causes of civil war from the collected data from 1960-99. It identifies the role of greed using greed theory in establishing actual causes that led to the massive loss. The authors note that the personal greed was greater determinants that spark the wave of civilian unrest. Notably, they point out that grievances were used to hide the greed and, as a result, many tribal organizations led by greed advanced physical assault on the citizens. In accordance with the greed theory, the article identifies that two important variable led to war. Evidently, the primary commodity exports and large immigrants caused significant pursuit for resources leading to war. However, the authors identify that racial and religious diversity hugely reduced the chances of war. The latter is inconsistent with the greed theory.
Findings: The author explored the greed theory, preference and grievance and rebellion in relation to the onset of the war. Using 78 large civil wars in existence, they found that constraints of resources evokes sense of rebellion and subsequently conflicts. In addition, the authors discovered that during the American Civil War for instance, there were over 1,000 combat-related deaths.
Besides, the authors identify that the war was caused by two main structural and system malfunction. Notably, using preference and constraints as key elements, they noted that Civil war was more prevalent because constraints to rebellion were typically weak. It meant that the group could advance its agitation with limited control from any authority. Secondly, the war started because preference to rebellion was typically strong. In addition, they identified political scientist analysis that the war was advance further by existence of diversity that includes racial, tribal and religious groups. Political repression, discrimination and racial segregation are noted as the leading causes of the civil war. The central theme that the article explores includes greed for resources and political space. In addition, it notes that rebellion and social movement was the biggest platform that pushed for preference and later rebellion.
Moreover, the authors studied labor organization movement and agitation for better working conditions and good wages as the fundamental contributors to rising of the war. Evidently, the authors found that it took 500-5000 employees rebellion from workplace to instigate a wave of the civil action in the firm. Notably, a study done in Angola identified that the movement would provoke up to 60,000 workers within hours of civil unrest. Moreover, the authors noted that in American civil War, the high pool of semi-skilled and unskilled laborers with guns turned the civil strikes in farms and industries into the physical war.
Discussion and Conclusions: The authors after examining greed, grievances and large-scale cases of numerous civil wars across the globe, it identified a number of issues. Firstly, the constraints factor largely caused civil wars. Constraint factors according to the authors are deficits in food, employment opportunities and farms. Because of poor pay in industries for instance, the countries went into industrial rampage. Besides, economic factors such as employment are classified under the constraints hence the authors identifies them as integral factors that caused the war. In conclusion, the article explores a number of issues in a broader view as determinants of the civil war. Notably, the overall results in studies of United States, Angola, Romania, Iran and many other incidences of civil war point out to rebellion due to denial of equal access. In countries that experienced devastating civil wars, three issues were primary causes. Firstly, racial segregation and tribal discrimination, shortage of economic resources and geographical resource disparities are greatest causes of war. These real issues led to a wave of civil wars in 19th and 20th centuries across the globe.
References
Chamarbagwala, R., & Moran, H. (2008). The Human Capital Consequences of Civil War: Evidence from Guatemala. Guatemala Civil Wat, (3002).
Collier, P., & Hoeffler, A. (2002). Greed and grievance in civil wars.
Ellingson, T., Gates, S., & Petter, N. (2001). Towards a Democratic Civil Peace? Democracy, Political Change and Civil War (1816-1992), 95(1), 33-48.
FEARON, J. D., & LAITIN, D. D. (2003). Ethnicity, Insurgency, and Civil War. American Political Science Review. doi:10.1017/S0003055403000534
Hartzell, C., Hoddie, M., & Rothchild, D. (2001). Stabilizing the Peace After Civil War: An Investigation of Some Key Variables. International Organization. doi:10.1162/002081801551450 Read More
Share:
Tags
Cite this document
(“Greed and Grievance in Civil War Research Paper”, n.d.)
Greed and Grievance in Civil War Research Paper. Retrieved from https://studentshare.org/history/1663932-civil-war

“Greed and Grievance in Civil War Research Paper”, n.d. https://studentshare.org/history/1663932-civil-war.
Comments (0)
Click to create a comment or rate a document

CHECK THESE SAMPLES OF Greed and Grievance in Civil War

...identification (all above optional – if you need them) History and Political Science Topic React to the ment that the Civil War was inevitable. Tell how you would have reacted to the attack on Fort Sumter. Include a discussion of the South’s arguments about States’ rights and “The Cause” as understood by Southerners. The Essay On issues such as the sovereignty of States, interpretations of the Constitution and particularly Slavery, the vast differences between North and South are evident, and the Civil War does seem to have been inevitable. Essential to the causes of the American Civil War is the strong feelings Southern States had...
2 Pages(500 words)Essay

Greed, not Grievance is the True Cause of Civil Wars

...Greed, not Grievance is the true cause of Civil Wars Introduction Civil war can be defined as severe conflicts between different regions, religions or groups of same country. It can lead to extreme violence causing rampant destruction of natural resources. The root cause of civil war is determined as grievance of citizens first leading to demonstrations and strikes, and finally when there is no positive outcome, there is outbreak of a civil war. When a civil war continues for a prolonged period with no sign of surrender...
16 Pages(4000 words)Research Paper

...At What Point Was The Civil War Inevitable? Details: al Affiliation: At What Point Was The Civil War Inevitable? The Civil War; the War for Southern Independence; the War of Secession; the War of Rebellion; the war between the North and the South; even the named seems to be wavering in unanimity. Characterized as “irrepressible,” “criminally stupid,” and/or “unnecessary bloodletting,” the controversy that goes deep to the causes of the war tells as much (Kurtz, 1985, p.130).With deep roots in the prevailing political and economic environment of the time,...
4 Pages(1000 words)Essay

What role do greed and grievance play in civil war

...message from dear client, this is just the part I have fully organized. i’m revising the ‘grievance’ portion part and refining the remaining8 pages. the in-text citations are also not yet visible here but I will fix them completely, so don’t worry. kindly give me 3-4 hours more to fully finalise the paper. I will inform you once the paper is ready for submission. thank you very much =) sincerely, writer What role do greed and grievance play in civil war? Much of the theoretical and policy discourse about civil wars has placed emphasis, not irrationally, on the cost or economic aspect of conflict. A helpful theoretical...
14 Pages(3500 words)Essay
sponsored ads
Save Your Time for More Important Things
Let us write or edit the research paper on your topic "Greed and Grievance in Civil War" with a personal 20% discount.
GRAB THE BEST PAPER

Let us find you another Research Paper on topic Greed and Grievance in Civil War for FREE!