Comments (0)
Add to wishlistDelete from wishlist
Cite this document
Summary
This is an imperative source because it provides the history of Mehmed II. Additionally, the source covers conquest of constatinople, campaigns and the code. This will assist in formulating a background of the…
Download full paperFile format: .doc, available for editing
HIDE THIS PAPERGRAB THE BEST PAPER98.7% of users find it useful 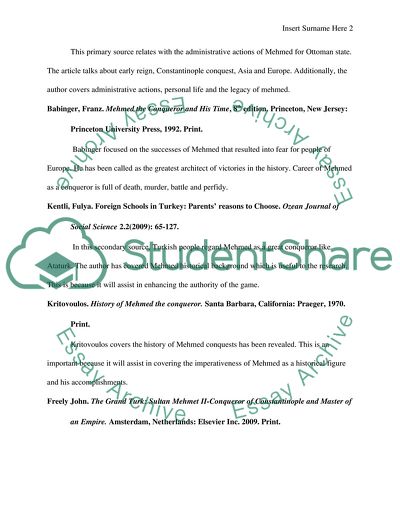 Extract of sample "Mehmed the Conqueror"

College: Annotated Bibliography: Mehmed the Conqueror Elsaie, Adel. Mehmed the Conqueror. Web. 28 October, This secondary source shows Mehmed as a conqueror of Ottoman Empire. This is an imperative source because it provides the history of Mehmed II. Additionally, the source covers conquest of constatinople, campaigns and the code. This will assist in formulating a background of the research.
Freely, John. The Grand Turk: Sultan Mehmet II - Conqueror of Constantinople, Master of an Empire and Lord of Two Seas. london:I B Tauris & Co Ltd. 2009. Print.
This is a primary source that depicts Mehmed as a ruler who dominated East and West from his palace. Freely’s audience covers people who believe in mythical elements in which Mehmet lived. The author talks about numerous endless campaigns and covering their history.
Fatih Municipality. Fatih Sultan Mehmet. 2014. Web. 28 October, 2014. This primary source relates with the administrative actions of Mehmed for Ottoman state. The article talks about early reign, Constantinople conquest, Asia and Europe. Additionally, the author covers administrative actions, personal life and the legacy of mehmed.
Babinger, Franz. Mehmed the Conqueror and His Time, 8th edition. Princeton, New Jersey: Princeton University Press, 1992. Print.
Babinger focused on the successes of Mehmed that resulted into fear for people of Europe. He has been called as the greatest architect of victories in the history. Career of Mehmed as a conqueror is full of death, murder, battle and perfidy.
Kentli, Fulya. Foreign Schools in Turkey: Parents’ reasons to Choose. Ozean Journal of Social Science 2.2(2009): 65-127.
In this secondary source, Turkish people regard Mehmed as a great conqueror like Ataturk. The author has covered Mehmed historical background which is useful to the research. This is because it will assist in enhancing the authority of the game.
Kritovoulos. History of Mehmed the conqueror. Santa Barbara, California: Praeger, 1970. Print.
Kritovoulos covers the history of Mehmed conquests has been revealed. This is an important because it will assist in covering the imperativeness of Mehmed as a historical figure and his accomplishments.
Freely John. The Grand Turk: Sultan Mehmet II-Conqueror of Constantinople and Master of an Empire. Amsterdam, Netherlands: Elsevier Inc. 2009. Print.
The source is crucial because it depicts how the Western people considered Mehmed as a brutal tyrant, but revered by Turks. The author also was a great renaissance and a brilliant military leader.
Theottomans. The Family: The Sultans. 2002. Web. 28 October, 2014. This is a secondary source relates with the conquests of Mehmed and provides description of Mehmed family including his wife, sons and daughters. The source is important because it will help in covering the family history, as well as, enhancing the research.
Levy, Avigdor. The Structure of the Jewish Community. In The Jews of Ottoman Empire. Princeton: Darwin Press. 1994, pp. 42-70. Print. Web. 28 October, 2014. In this secondary sources, Mehmed’s ambition of converting the Istanbul into a metropolis and role of Jews in his plan have been discussed. He considered that administration of Jewish people was important for the Ottoman Empire. He brought Jewish culture, language, and customs to Istanbul.
Ihsanoglu, Ekmeleddin. Madrasa Education during the Early Ottoman Period. Conyngham, Manchester: Foundation for Science Technology and Civilisation. 2004. Print.
This is a secondary source which covers Mehmed’s early days of conquest, he transferred a number of Byzantine buildings into mosques, madrasas and lodges for dervish people. The author also covers the building of the mosque complex in Istanbul to transform the Istanbul into a city of learning. Read More
Share:
Tags
Cite this document
(“Mehmed the Conqueror Annotated Bibliography Example | Topics and Well Written Essays - 250 words”, n.d.)
Retrieved from https://studentshare.org/history/1662311-mehmed-the-conqueror

CHECK THESE SAMPLES OF Mehmed the Conqueror

Analyze and discuss Charles V war with the Ottoman Empire

...the Ottomans, more directly than ever, to powerful empires’ (99). Overland to the east, Suleiman was confronted with the Persian Safavids on his frontiers in Mesopotamia and Anatolia; in the Red Sea and the Indian Ocean, he dispatched fleets against the ships of Catholic Portugal, busily building a commercial empire on the coasts of the Africa, the Arabian Gulf and India. Mehmed II, the conqueror of Constantinople, had only really faced a much enfeebled Byzantium, a shrunken state which showed little sign of its former glory. Selim himself had gone to war with major neighbors, but in toppling the Mamluks in Egypt, he was destroying a dynasty who were already unstable in power. However, Suleiman, in...
4 Pages(1000 words)Essay

Is inclusion in main stream school ideal for children with sen

The Life of William the Conqueror

...﻿The Life of William the Conqueror The battle of Hastings and William’s invasion of England in 1066 is crucial as far as the history of England is concerned. In the history of England William is known as William, the conqueror as he was unchallenged as the English ruler of the period. William has a unique role in the English history as his administrative reforms had been instrumental in changing and shaping the development of England as a nation. William formulated new laws, built castles, and made remarkable contributions to the development of English language as well by incorporating into English many of the French vocabulary used by the Norman invaders (Hilliam 7). Ever since he was crowned as the...
3 Pages(750 words)Research Paper

...? CHROME THE CONQUEROR INTRODUCTION “Hey Son! why don’t you Google out the latest book deals at the renowned computer store website?” Says the excited father who has recently decided to buy his son a new laptop for the great grades he got in his high school last year. “Google” is the first thought that comes into the mind whenever help is needed. May it be the purchasing of a product online or the searching of route to a new hotel Google does it all for you. Starting off initially as the foremost search engine that could accommodate itself in any available hardware setup and operating system environment Google never looked back. It then ventured into specialized search apps that were designed for each specific...
4 Pages(1000 words)Essay

...r William the Conqueror Introduction William the Conqueror was the ruler of England from 1066 till his demise. He isconsidered the last successful foreign invader to rule and occupy England. He would achieve supremacy in England by defeating the forces of King Harold at the Battle of Hastings. His reign in England witnessed a renaissance of English culture as it would be influenced by Norman culture. William’s reforms included changes in English legislation, language and the introduction of feudalism. Further changes included a revolution in the concept of military engineering and defense with the building and fortification of castles. This paper studies the reforms initiated by William the...
4 Pages(1000 words)Essay

Naplion invasion of egypt and its impact on mehmed Ali

...Napoleon Invasion of Egypt and its Impact on Mehmed Ali On the year 1798, Napoleon Bonaparte led a French invasion in Egypt that began with the capture of Alexandria. Napoleon’s chief motive for invading Alexandria was because the Mameluke Beys favored the commerce of the English; who were their mortal enemies. Furthermore, Bonaparte claimed that Mameluks extorted and oppressed French merchants, as well as enforcing a tyranny rule over the inhabitants. Moreover, Napoleon believed that the capture of Egypt would aid in the defeat of Britain. This is because he aspired to capture Malta that would act as a naval base for the French and consequently challenge the British occupation of India. To this end, the Napoleon took...
1 Pages(250 words)Essay

...tribute, which Venice accepted[Def01]. In May 1481, Mehmed the Conqueror passed away. This resulted in a fight for the throne between Bayezid and Cem, who were his sons. Bayezid became the Ottoman sultan and sent his envoys to the French kings, with an offer to assist Charles VIII against the latter’s foes. This offer was rejected by the French monarch. However, in the sixteenth century, François I entered into an alliance with Süleyman and asked the latter for help in dealing with his enemies. The death of Mehmed was also the precursor for the fifteenth century encounter between the French and the Ottomans[Iso11]. As such, these contacts of the fifteenth century, set the precedent for...
6 Pages(1500 words)Case Study

... Dracula Untold Dracula Untold narrates the story of a man d Vlad the Impaler, who comes back to his native homein Transylvania (McLaren 1). The Turkish attacked Vlad’s village when he was a child and enslaved him in their empire and trained him as a soldier. He later becomes the most dreaded warrior earning him the nickname “Impaler.” One day, Vlad and his soldiers notice that a vampire has attacked one of his soldiers. The creature attacks them before they could organize themselves and leaves many dead soldiers. Vlad flee to the cave at dawn. The Turkish Sultan named Mehmed the Conqueror demands the replacement of his soldiers with 1000 young boys, but Vlad refuses (McLaren 1). Vlad decides to ask the vampire for assistance... Dracula...
1 Pages(250 words)Movie Review

Let us find you another Annotated Bibliography on topic Mehmed the Conqueror for FREE!