Comments (0)
Add to wishlistDelete from wishlist
Cite this document
Summary
This region borders flowing water such as from rivers around Lake Ontario and the Finger Lakes. Their lands were fertile and covered in woodlands, providing wood for the construction of houses. They had permanent villages and…
Download full paperFile format: .doc, available for editing
HIDE THIS PAPERGRAB THE BEST PAPER95.2% of users find it useful 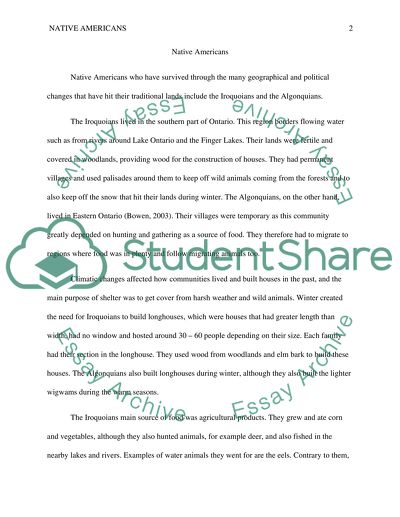 Native Americans Native Americans Native Americans who have survived through the many geographical and political changes that have hit their traditional lands include the Iroquoians and the Algonquians.
The Iroquoians lived in the southern part of Ontario. This region borders flowing water such as from rivers around Lake Ontario and the Finger Lakes. Their lands were fertile and covered in woodlands, providing wood for the construction of houses. They had permanent villages and used palisades around them to keep off wild animals coming from the forests and to also keep off the snow that hit their lands during winter. The Algonquians, on the other hand, lived in Eastern Ontario (Bowen, 2003). Their villages were temporary as this community greatly depended on hunting and gathering as a source of food. They therefore had to migrate to regions where food was in plenty and follow migrating animals too.
Climatic changes affected how communities lived and built houses in the past, and the main purpose of shelter was to get cover from harsh weather and wild animals. Winter created the need for Iroquoians to build longhouses, which were houses that had greater length than width, had no window and hosted around 30 – 60 people depending on their size. Each family had their section in the longhouse. They used wood from woodlands and elm bark to build these houses. The Algonquians also built longhouses during winter, although they also built the lighter wigwams during the warm seasons.
The Iroquoians main source of food was agricultural products. They grew and ate corn and vegetables, although they also hunted animals, for example deer, and also fished in the nearby lakes and rivers. Examples of water animals they went for are the eels. Contrary to them, the Algonquians were mostly hunters and gatherers, hunting mostly the white tailed deer during winter. In summer, when the lakes were no longer frozen, they would fish for food and also kill seals for meat. They left their inland settlements during spring and built others at ocean fronts, depending on sea food and also gathering some fruits and wild vegetables (Hirschfelder, 2000). The two tribes used bows and arrows to hunt animals, although the Algonquians also used techniques such as traps and snares on small animals. Meat was eaten communally, cooked by either men or women depending on the time and occasion.
Skins and fur were the main raw materials for making clothes among the Iroquoians, and these were sewn together using needles made from animal bones. Deerskin was a favorite and could be sewn into leggings and tunics. Shells and porcupine quills were dyed and used to decorate the clothes. They wove mats and baskets from tree barks and used clay for cooking utensils. Axe heads were made from stone. Weapons and hunting tools, for example spearheads and arrowheads, were made from splints. The Algonquians used wood, stone, bark and animal skin for their tools and clothing and could also sew fishing nets from tree fibers. They also made fishing hooks from animal bones and fishing boats from well woven tree barks and fibers.
Although both the Iroquoians and the Algonquians existed in native America from around the same time in history, they had different cultures influenced by the varying environments they lived in. They adapted over time according to the climate and nature of their geographical environment, developing skills and tactics that enabled them survive over the years.
References
Bowen, R. A. (2003). The Native Americans. Philadelphia: Mason Crest Publishers.
Hirschfelder, A. B. (2000). Native Americans. New York: Dorling Kindersley Publishers Read More
Share:
Tags
Cite this document
(“Social Studies Native Amercian Group Essay Example | Topics and Well Written Essays - 500 words”, n.d.)
Social Studies Native Amercian Group Essay Example | Topics and Well Written Essays - 500 words. Retrieved from https://studentshare.org/history/1661074-social-studies-native-amercian-group

...? Essential Elements of a Good Social Science Curriculum: One essential element that a good social science curriculum must have is its explanation of culture, and how culture shapes the behavior and perceptions of an individual. Culture refers to the people’s ways of life, and students are therefore taught on the various aspects of culture as they progress from one grade to another (Au, 2012). For example, a student at the high school will be taught on the various cultural believes and practices of the indigenous societies found in America. A student at a lower level of school might not be able to understand these concepts, and on this basis, these children might be taught on the existence of various cultural groups, and where... they are...
3 Pages(750 words)Research Paper

...that a competent social worker is part of the services workforce, and this means they must understand the responsibilities of their role. Policies, procedures and protocols must exist in hard document form to enable social workers to meet the code of practice standards. Training and ongoing professional development opportunities must be made available to social worker staffs. Policies must address issues of discrimination and dangerous or exploitive behavior. And finally the code must be promoted among social workers as well as the wider community. ii) The Task Force for Homelessness; and the Homeless Monitoring Group The Task Force revision...
10 Pages(2500 words)Essay

...You're 7 May 2006 Social Science Studies The reason that is found for the scientific concept of religion developing in different cultures is due to the belief that there is a need to try and understand the conduct of individuals, as well as a need to know where it comes from and why it exists. History shows that for every major movement that has occurred in various societies, a large part of it had to do with the religious belief systems set out. Furthermore, one of the most logical reasons that have been found for religion appearing in societies throughout the world has been to try and understand the meaning of life and death (Swatos 2006). Many people search for the meaning of existence and why they are here, as well as how... of man. ...
4 Pages(1000 words)Essay

...Learning A systematic and cohesive learning makes study of social studies interesting and meaningful. The student looks forward to such learning and his curiosity is heightened and satisfied step by step with each passing grade. Learning must be such that interest in the subject is awakened. The curriculum must be composed of not only contents but also the means of conveying the message. There must be good use of visuals, audiovisuals, group discussions and interactions with students. The use of computers and search engines like google and yahoo must be encouraged. Students must be given projects highlighting issues on social studies. It...
3 Pages(750 words)Essay

A Comparative Analysis of Amores Perros and Babel

...Insert Anishinabe social movement Introduction The topic generally talks about the fight of Anishinabe encounter with their native superpower communities and how the fight occurred sometimes around 17th centuries. Anishinabe people groups lost their nationality since they claim to live in the north after the whites invaded them. This resulted in the Anishinabe people to send their troops of soldiers in the United States to fight back to obtain their nationality from the British attacks from their land. But with the colonies that were established between in 1887 between Rancherias and reservations that was formed, the Anishinabe continued to fight following the established prophecy ...
4 Pages(1000 words)Essay

14 Pages(3500 words)Assignment
sponsored ads
Save Your Time for More Important Things
Let us write or edit the essay on your topic "Social Studies Native Amercian Group" with a personal 20% discount.
GRAB THE BEST PAPER

Let us find you another Essay on topic Social Studies Native Amercian Group for FREE!