Comments (0)
Add to wishlistDelete from wishlist
Cite this document
Summary
It is impossible to point just one factor that justified the actions of the Civil War Soldiers. First and foremost was the fact that the Soldiers…
Download full paperFile format: .doc, available for editing
HIDE THIS PAPERGRAB THE BEST PAPER93% of users find it useful 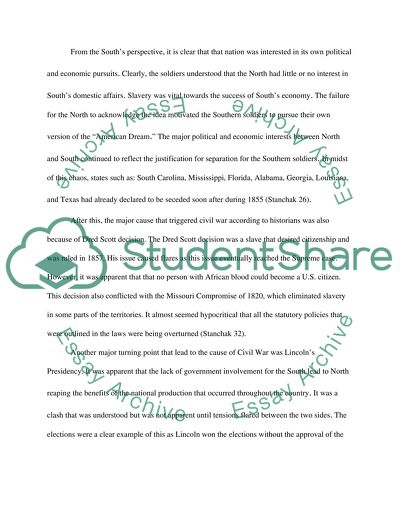 Extract of sample "History of slavery"

The civil war was one of the bloodiest war fought that continues to leave a dark impression throughout the of the US History. It is impossibleto point just one factor that justified the actions of the Civil War Soldiers. First and foremost was the fact that the Soldiers in North wanted to keep the nation united. The notion of South’s separation from the Union was an idea that the North clearly could not digest. In addition, Lincoln’s pursuit to free the slaves from the South was also an additional point that justified the morale of the soldiers in the north. One cannot ignore the fact that if the South did not declare succession, Lincoln would have not declared war in the south. James McPherson, an expert in this subject, and the author of The Battle Cry of Freedom: The Civil War Era insists, “ In July 1861, the U.S. House of Representatives passed a resolution, by a nearly unanimous vote, that affirmed that the North was not waging the war to overthrow slavery but to preserve the Union.” (McPherson 66). Clearly, the focal point of the war was to keep the unity of nation for the sake of peace and security. The events that lead to civil war was the Mexican war, the dependence of the North on the South, the slavery issue, and the Dred Scott decision.
Post Mexican War, America was segmented into many territories. This posed a problem as both the North and the South had to manage the issue of slavery. A Band-Aid issue was delivers as Congress passed the Compromise of 1850 which California became a free state. The Fugitive Slave Act of 1850 also did facilitate the cause as the South despised this form their Northern Counterparts (Jordan 36).
From the South’s perspective, it is clear that that nation was interested in its own political and economic pursuits. Clearly, the soldiers understood that the North had little or no interest in South’s domestic affairs. Slavery was vital towards the success of South’s economy. The failure for the North to acknowledge the idea motivated the Southern soldiers to pursue their own version of the “American Dream.” The major political and economic interests between North and South continued to reflect the justification for separation for the Southern soldiers. In midst of this chaos, states such as: South Carolina, Mississippi, Florida, Alabama, Georgia, Louisiana, and Texas had already declared to be seceded soon after during 1855 (Stanchak 26).
After this, the major cause that triggered civil war according to historians was also because of Dred Scott decision. The Dred Scott decision was a slave that desired citizenship and was ruled in 1857. His issue caused flares as this issue eventually reached the Supreme case. However, it was apparent that that no person with African blood could become a U.S. citizen. This decision also conflicted with the Missouri Compromise of 1820, which eliminated slavery in some parts of the territories. It almost seemed hypocritical that all the statutory policies that were outlined in the laws were being overturned (Stanchak 32).
Another major turning point that lead to the cause of Civil War was Lincoln’s Presidency. It was apparent that the lack of government involvement for the South lead to North reaping the benefits of the national production that occurred throughout the country. It was a clash that was understood but was not apparent until tensions flared between the two sides. The elections were a clear example of this as Lincoln won the elections without the approval of the South, which was a crucial point as well. This constant struggle of slavery, politics and cultural values finally all lead to the civil war.
Works Cited
"A Bibliography of Civil War Articles, 1960-1961." Civil War History 7, no. 4 (1961): 438-442.
Dubrulle, Hugh. "One War at a Time: The International Dimensions of the American Civil War, and: The Blessed Place of Freedom: Europeans in Civil War America (review)." Civil War History 51, no. 3 (2005): 325-327.
Jordan, Robert Paul. The Civil War. Washington: National Geographic Society, 1969.
McPherson, James M.. Battle cry of freedom: the Civil War era. New York: Oxford University Press, 1988.
Stanchak, John E.. Civil War. New York: Dorling Kindersley Pub., 2000. Read More
Share:
Tags
Cite this document
(“History of slavery Research Paper Example | Topics and Well Written Essays - 500 words”, n.d.)
History of slavery Research Paper Example | Topics and Well Written Essays - 500 words. Retrieved from https://studentshare.org/history/1660773-history-of-slavery

CHECK THESE SAMPLES OF History of slavery

...African American History Assessing the antebellum slavery Ante means before and bellum means war. It had different categories of slaves working as urban and domestic skilled, rural and agriculture, others living in homes owned by slave holders as well as those who worked in plantations. This slavery is viewed as the highest degree of aristocracy. The aristocrats were very wealthy and owned vast pieces of land which were developed by the slaves. One factor that had an effect on slave institution was need for labor to work in the white farms. Slave trade was viewed by slave masters as necessary evil because there was sparse population and therefore they needed labor to work in their farms....
8 Pages(2000 words)Essay

...returning. Second, it is important to scholars to understand the social and economic conditions of the early English colonies, and the perspective of slaves (and slaveholders) provides an excellent perspective on that history. According to one account, “Research has shown that, despite enormous cruelties, slavery was a profitable labor system” (Norton, Sheriff and Katzman 232). Common belief in our day is that slavery itself began as an expression of racist ideologies against the African continent. However, it seems more likely that slavery took its origins in the English colonies with economic factors and the growing capitalist ideology sweeping across Europe and her...
2 Pages(500 words)Essay

...Slavery Introduction: Sojourner Truth (1797-1883) and Harriet Tubman (1820-1913) were African American women who were born slaves in United States of America. Originally, sojourner Truth was named Isabella Baumfree but from 1843 onwards she was known by her self-given name Sojourner Truth. Both women could not read and write but somehow managed to change a nation on the basis of their determination alone. Each woman’s individual story of trial and triumph is unique and continues to serve as a role model for the world. The life, hardships faced and their story of success reflects many similarities which seem to create a unique bond between the two most popular African American women in World history. One...
4 Pages(1000 words)Research Paper

History Of Slavery In The United States Of America

...? History of Slavery in the United s of America History of Slavery in the UnitedStates of America 1. The colonization of the United States of America required a large amount of manpower and slavery was the direct result of this. Slavery provided the colonizers with a lot of labor and the costs that the institution involved were minimal when the output was taken into account. The urgency that the early settlers showed in setting up the economic foundations of the state is what led to the consolidation of the institution of slavery. Much of the revenue that was generated in America in the seventeenth century was siphoned...
3 Pages(750 words)Essay

History of Slavery in the Caribbean and West Africa

...History of Slavery in the Caribbean and West Africa The 1926 Slavery Convention described slavery as "...the status or condition of a person over whom any or all of the powers attaching to the right of ownership are exercised..." Therefore, a slave is someone who cannot leave an owner or employer without explicit permission, and who will be returned if they escape. Therefore, a system of slavery - as opposed to the isolated instances found in any society - requires official, legal recognition of ownership, or widespread tacit arrangements with local authorities, by masters who have some influence because of their social and/or economic status...
12 Pages(3000 words)Essay

History of Slavery in Colonial America

...Slavery has become one of the most intriguing periods in American history. While most people associate slavery with the southern half of the countryduring the early nineteenth century, few know that slavery has been a stain on America's fabric since the colonists first settled on America's shores. The history of slavery in America is one of betrayal and abuse. It is a gritty and complicated history that sprung out of greed and prejudice. Nonetheless, it is part of America's history, and needs to be told. To first understand how slavery became a part of life in colonial America, one...
7 Pages(1750 words)Essay

The HIstory of Slavery

...In history, slavery and war have both been considered inevitable consequences of human nature. Yet slavery has been abolished, and moral progress has significantly contributed to slavery's disappearance. Despite the disappearance of slavery in Great Britain, in the American and West Indian colonies of the British Empire, slavery was a way of life and for some reason, it was easier to abolish slavery in Great Britain than it was in the United States. Although slavery ended in the United States more than a century ago, its legacy continues to be a matter of dispute among scholars and the basis for...
6 Pages(1500 words)Essay

...18 October Slavery in Early American History Since time immemorial, slavery has been one of the most contentious issues, drawing its origins in the 16th century. The origin of slavery can be attributed to the Spanish colonies that were reportedly practicing slavery as early as the mid 1500s. The trend of slavery and the slave trade eventually reached the North America in the early 17th century. This occured when the shores of Virginia initially acquired a ship load carrying about 20 people of the African origin. This defined the origin and mixed reaction story of slavery. Reference is made of mixed reaction given the...
4 Pages(1000 words)Essay

The History of Slavery in Virginia

...The History of Slavery in Virginia Upon their arrival at Jamestown, the Indigenous Americans were not enslaved instantly. Slavery was not a new phenomenon to the English men. During the 1660’s period just after the civil war in Virginia, there was a high demand in terms of labor as compared to the availability of the servants. As a result, the colony of Virginia made some amendments in their laws, stating that the black people were to be retained in the state as slaves permanently. The Africans could not communicate with each other because they were illiterate and they all spoke different languages (Morgan 12). During the initial days, the black people were treated as slaves. They...
2 Pages(500 words)Essay
sponsored ads
Save Your Time for More Important Things
Let us write or edit the research paper on your topic "History of slavery" with a personal 20% discount.
GRAB THE BEST PAPER

Let us find you another Research Paper on topic History of slavery for FREE!