Comments (0)
Add to wishlistDelete from wishlist
Cite this document
Summary
Native Americans, majorly composed of Red Indians, Sioux, Crows and Blackfeet among others, had a poor relation with both the ruling government and the white settlers who were all over exploiting the country’s resources. In the year 1850, the then ruling United States…
Download full paperFile format: .doc, available for editing
HIDE THIS PAPERGRAB THE BEST PAPER95.1% of users find it useful 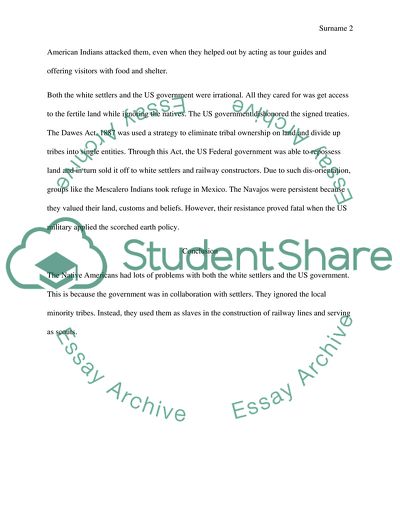 Extract of sample "Make a title"

Colonial Behavior Native Americans, majorly composed of Red Indians, Sioux, Crows and Blackfeet among others, had a poor relation with both the ruling government and the white settlers who were all over exploiting the country’s resources. In the year 1850, the then ruling United States government was eager to expand its territory past the Mississippi river, an area dominated by the American native tribes (Hamilton). The mission moved on steadily especially with the arrival of European and Asian settlers who were in search of gold, which was discovered in 1849. The US government offered security to the settlers, who quickly established homes in the midst of native tribes. This brought in disagreements since white settlers had a negative attitude towards native tribes and had to react.
White settlers viewed the Indian style of living as poor. They wanted them to follow lifestyles. This ranged from trying to convert them into Christianity, teaching them to speak English. Whites viewed them as people with a very low sense of intelligence judging from the way the built their houses (Roark 64). The government, which favored the white settlers took it as a favor granted unto the natives. However, it all lead to continuous attacks, disagreements and violence. In 1868, the Fort Laramie Treaty had to be signed in order to bring peace between the United States Government and the American Native tribes. This was after white settlers claimed that American Indians attacked them, even when they helped out by acting as tour guides and offering visitors with food and shelter.
Both the white settlers and the US government were irrational. All they cared for was get access to the fertile land while ignoring the natives. The US government dishonored the signed treaties. The Dawes Act, 1887 was used a strategy to eliminate tribal ownership on land and divide up tribes into single entities. Through this Act, the US Federal government was able to repossess land and in turn sold it off to white settlers and railway constructors. Due to such dis-orientation, groups like the Mescalero Indians took refuge in Mexico. The Navajos were persistent because they valued their land, customs and beliefs. However, their resistance proved fatal when the US military applied the scorched earth policy.
Conclusion
The Native Americans had lots of problems with both the white settlers and the US government. This is because the government was in collaboration with settlers. They ignored the local minority tribes. Instead, they used them as slaves in the construction of railway lines and serving as scouts.
Works cited
Hamilton, Robert. United States and Native American Relations. Fgcu.edu. 2000. Web. 9 October 2014.
Roark, James, L. the American Promise Value Edition, Combined Version: A History of the United States. New York. 2000. Print. Read More
Share:
Tags
Cite this document
(“Make a title Essay Example | Topics and Well Written Essays - 250 words - 3”, n.d.)
Make a title Essay Example | Topics and Well Written Essays - 250 words - 3. Retrieved from https://studentshare.org/history/1660033-make-a-title

CHECK THESE SAMPLES OF Make a title

Choose a country, which underwent a recession, and where fiscal and monetary policies were used to overcome the recession

...Consumer Behaviour Table of Contents Consumer Behaviour Table of Contents 2 Introduction 3 Literature Review 3 Stimulus-Behaviour Model 3 Buy GridModel 5 Industrial Buying Behaviour 6 Buyer Seller Interaction 7 Conclusion 9 Reference 9 Bibliography 10 Introduction The purpose of marketing is to make consumers develop an urge for a particular product even if they are not looking for the same. That is why organisations are required to understand the behaviour of customers before marketing their products in a more desirable way. Consumer behaviour is defined as “the way the consumers act or behave when looking for, buying and using products” (O’Dougherty, Haynes, Davies & O’Connor, 2007). Consumer behaviour is significant to...
5 Pages(1250 words)Literature review

Title: The essence of Operations Management is the need to make rational decisions in difficult circumstances with limited, imperfect information

Interview a Relative/Friend/Colleague About a Sonnet (with commentary)

... 12th October The French - Indian war and its consequences The Seven Year’s war was a major conflict from 1756-1763. It is also known as the French and Indian war, and ended in 1763, when the Treaty of Paris was signed (Richard 2000). The war changed the relations between France and Britain, their colonies and the Indian tribes. Following the war, France ceded a massive territory to Britain. Subsequent frontier policy and Britains increased tax upon the colonies led to increased colonial discontent. This paper will explain the actions taken by British leaders from 1763-1765; the reasons for taking these actions; and whether or not Britain achieved its goals through these actions. Britain took measures to retain control over... 12th October...
1 Pages(250 words)Essay

Make up a title

...to California, and the United States emerged as a continental power. Austin was anxious to justify the contract, and bring a good number of families. As many unmarried persons, as well as young men, came to the colony. Austin also suggested the primary concern of them being in pairs, making an individual the head of a particular family.Thus, the two would obtain a family head right, and the family members will increase. The arrangement leads a fortunate result to all concerned. Early 1823, Austin returned to his colony. Then Austin stopped to ascertain the powers held by general captain of the northeastern internal provinces. In addition, to have it defined and structured in the form of Spanish, and Austin was...
1 Pages(250 words)Essay
sponsored ads
Save Your Time for More Important Things
Let us write or edit the essay on your topic "Make a title" with a personal 20% discount.
GRAB THE BEST PAPER

Let us find you another Essay on topic Make a title for FREE!