From Slavery to Freedom, Edition 9, CHAPTER 5,and ODYSSEY PART 2B - Book Report/Review Example

Comments (0)
Add to wishlistDelete from wishlist
Cite this document
Summary
This event was significant as it shaped development of the country. The British decided to impose certain taxation and American land owners were reluctant to pay. Remarkably,…
Download full paperFile format: .doc, available for editing
HIDE THIS PAPERGRAB THE BEST PAPER97.8% of users find it useful 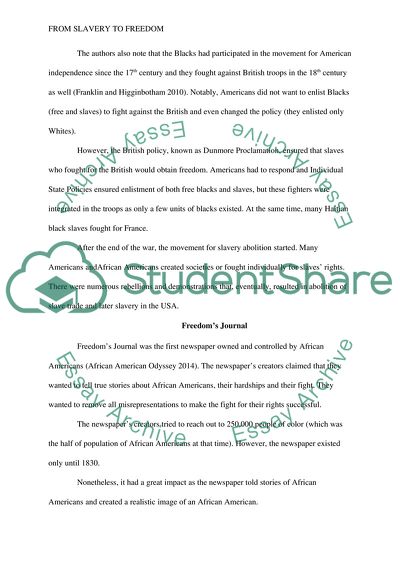 Extract of sample "From Slavery to Freedom, Edition 9, CHAPTER 5,and ODYSSEY PART 2B"

Summary The starts with mentioning the great victory of the British Empire in the war with France. This event was significant as it shaped development of the country. The British decided to impose certain taxation and American land owners were reluctant to pay. Remarkably, landowners started their fight for being represented in the parliament to have the influence on the British policies concerning North America. Franklin and Higginbotham (2010, 81) stress that this fight was closely connected with the concepts of slavery and racism as landowners insisted that they would not become British “Negroes”.
In the second quarter of the eighteenth century, (former) white servants were becoming small landowners and they also joined the movement to gain more rights. Some politicians (Jefferson) addressed issues related to slavery or rather slave trade and condemned it. Many colonists were also against slavery as they believed it violated basic rules of the nature and God. However, these voices were not heard in the south and the British did not pay attention to them.
The authors note that “[d]rawing from the political ideology of the American revolutionary crisis” African Americans started their own fight for their basic rights (Franklin and Higginbotham 2010, 92). The fight was held in different ways: writing pamphlets, participating in demonstrations, escaping from their owners and so on.
It is noteworthy that lots of African Americans became known to the public and became heroes for many (Black as well as White Americans). Such personalities as Crispus Attucks and Phillis Wheatley (who had a really remarkable life as she was born a slave and became a renowned poet and fighter for her people’s rights) became symbols of the fight and sufferings of slaves.
The authors also note that the Blacks had participated in the movement for American independence since the 17th century and they fought against British troops in the 18th century as well (Franklin and Higginbotham 2010). Notably, Americans did not want to enlist Blacks (free and slaves) to fight against the British and even changed the policy (they enlisted only Whites).
However, the British policy, known as Dunmore Proclamation, ensured that slaves who fought for the British would obtain freedom. Americans had to respond and Individual State Policies ensured enlistment of both free blacks and slaves, but these fighters were integrated in the troops as only a few units of blacks existed. At the same time, many Haitian black slaves fought for France.
After the end of the war, the movement for slavery abolition started. Many Americans andAfrican Americans created societies or fought individually for slaves’ rights. There were numerous rebellions and demonstrations that, eventually, resulted in abolition of slave trade and later slavery in the USA.
Freedom’s Journal
Freedom’s Journal was the first newspaper owned and controlled by African Americans (African American Odyssey 2014). The newspaper’s creators claimed that they wanted to tell true stories about African Americans, their hardships and their fight. They wanted to remove all misrepresentations to make the fight for their rights successful.
The newspaper’s creators tried to reach out to 250,000 people of color (which was the half of population of African Americans at that time). However, the newspaper existed only until 1830.
Nonetheless, it had a great impact as the newspaper told stories of African Americans and created a realistic image of an African American.
Reference List
African American Odyssey. 2014. “Free Blacks in the Antebellum Period.” Last modified 2014. Accessed October 3, 2014. http://memory.loc.gov/ammem/aaohtml/aopart2b.html.
Franklin, John Hope, and Evelyn Higginbotham. 2010. From Slavery to Freedom: A History of African Americans. New York, NY: McGraw-Hill. Read More
Share:
Tags
Cite this document
(“From Slavery to Freedom, Edition 9, CHAPTER 5,and ODYSSEY PART 2B Book Report/Review”, n.d.)
From Slavery to Freedom, Edition 9, CHAPTER 5,and ODYSSEY PART 2B Book Report/Review. Retrieved from https://studentshare.org/history/1659181-from-slavery-to-freedom-edition-9-chapter-5and-odyssey-part-2b

“From Slavery to Freedom, Edition 9, CHAPTER 5,and ODYSSEY PART 2B Book Report/Review”, n.d. https://studentshare.org/history/1659181-from-slavery-to-freedom-edition-9-chapter-5and-odyssey-part-2b.
Comments (0)
Click to create a comment or rate a document

CHECK THESE SAMPLES OF From Slavery to Freedom, Edition 9, CHAPTER 5,and ODYSSEY PART 2B

Effects of Engery Drinks on the Human Body

...argument about who needs to do what. Even the United States did not want to be a part of the summit. The United States is a leader in the world and until we get it, no one will. 4. Many times, in a effort to manage biodiversity, man moves a species. It then becomes an invading species and this causes problems with killing out other natural species. There is always a problem when man interferes. There might be a better answer and that is to be sure to save some of the habitat that each species uses and force man to live in such a way to live beside many of these species. It might also be a good idea to license species of animals that are purchased that are frequently let go in the wild. This would include, dogs, cats,...
2 Pages(500 words)Essay

... 06 Jun Religious and Nationalistic Conflict in Middle East The main theme emerging from this text is dishonestyand mistrust. There exists political dishonesty among the states in Middle East which has resulted to mistrust amongst the parties involved. Religious differences between the Muslims, Christians, and Judaists do not help matter either. It has only served to propagate religious animosity. Primarily, the existence of the state of Israel is loathed by all Arab groups. Creation of the state of Israel in the midst of Arab land is perceived as offensive and pro-Western which was disliked by the majority of Arab population. Prior to the First World War, the Jewish immigrants and Palestinians coexisted peacefully despite... 06 Jun Religious ...
1 Pages(250 words)Coursework

...to prove his physical fitness by riding horseback from Ohio to the nation’s capital. Even lynching was common during that time. In 1919 the NAACP published Thirty Years of Lynching in the United States. This report indicated that 3,224 people were lynched in the thirty year period. Of these, 702 were white and 2,522 black1 . The interracial National Association for the Advancement of Colored People (NAACP) fought for equality in the military by severely criticizing the “whites-only” policy. As a result of it separate training camps for the black officers were conducted. Such organizations took initial steps which really paved the way for the equality of the African Americans in the U.S. army and therefore, it was their rise from...
2 Pages(500 words)Book Report/Review

From Slavery to Freedom, Edition 9, CHAPTER 15 and Odyssey part- 7/A

...From Slavery To Freedom, Chapter 15 Chapter 15 of John Hope Franklin’s ‘From Slavery to Freedom: A History of African Americans’ discusses the experiences of African American soldiers and civilians during and post World War I. By 1912, African Americans were accustomed to racial marginalization. The National Association for the Advancement of Colored People (NAACP) endorsed Woodrow Wilson’s presidential candidacy in the same year believing that he would advocate for fair treatment of African Americans but he abandoned them once elected. The World War I rallying cry, ‘100% American,’ awakened a sense of patriotism in both Black and White...
2 Pages(500 words)Essay

...Book Review: From Slavery to Freedom, Chapter 16 February 19, The book From Slavery to Freedom by John Hope Franklin, a distinguished African American historian, touched upon a racial inequality in the United States and shifting of accents in public opinion concerning a growing impact of black artists upon cultural realm of both the USA and the world community at large in the first half of the twentieth century. In this essay I will focus on the Chapter 16 of the book, which dwells on the artistic expression of African Americans in America and abroad, as well as the role of the African American cultural renaissance in the history of the...
2 Pages(500 words)Book Report/Review

...and 1970s was accompanied by rising levels of black joblessness and poverty creating to young blacks an obstacle to overcome. In conclusion chapter 21 of this book shows the progress of blacks in America since the time they were taken as slaves and only seen as laborers to the time they began to realize there rights and potentials they were carrying. The chapter also outlines the key people among the blacks and also white Americans who made it possible for the freedom of the blacks. Lastly it outlines the strategies and actions taken within different period to attain the freedom and to ensure that every black enjoys their rights. Bibliography Higgibotham, John Hope...
2 Pages(500 words)Book Report/Review

...Business Chapter 9 Question 2 Motivation refers to a set of processes that determine or influence people to behave the way they do. Motivation is mainly affected by the environment in which an employee is operating in as this causes him to behave in a certain manner. The motivation process starts with the human needs and the efforts that people engage in so as to satisfy these needs, the motivation process is usually a dynamic since an individual has got several needs to satisfy at one particular time. Satisfying these needs take different time frames but the starting point is always the needs. The motivation process can be represented diagrammatically; Question 10 Motivational strategies are very...
1 Pages(250 words)Assignment

...From Slavery to Freedom After a long period of searching throughout the world, Doro finally gets to find his lost friend and slave, Anyanwu who had earlier turned herself into a dolphin and lived in waters for quite a long period of time, afraid of Doro’s injustices. By then Anyanwu had already formulated her own village that she was in charge of, with siblings possessing extraordinary powers such as the power to convert from one bodily form to another and from human into animal characters. Once again, due to the fact that Anyanwu is a woman and African in particular, Doro takes full control and wins her back to himself and exercises full control on whom she breeds with in order to obtain a wide range of...
2 Pages(500 words)Coursework
sponsored ads
Save Your Time for More Important Things
Let us write or edit the book report/review on your topic "From Slavery to Freedom, Edition 9, CHAPTER 5,and ODYSSEY PART 2B" with a personal 20% discount.
GRAB THE BEST PAPER

Let us find you another Book Report/Review on topic From Slavery to Freedom, Edition 9, CHAPTER 5,and ODYSSEY PART 2B for FREE!