Comments (0)
Add to wishlistDelete from wishlist
Cite this document
Summary
Another set of researchers believes that Islam was brought to Asia from the Arabian territories in the Middle East. There is also another group that believes that the Chinese, who…
Download full paperFile format: .doc, available for editing
HIDE THIS PAPERGRAB THE BEST PAPER92.3% of users find it useful 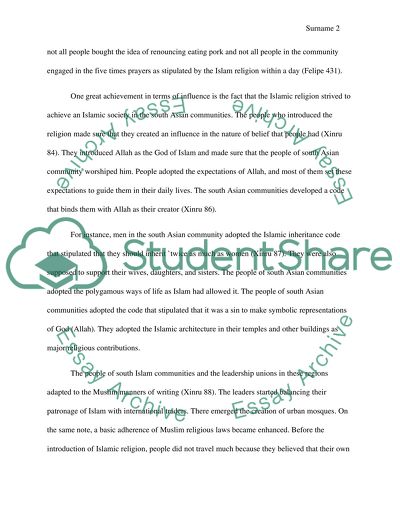 Extract of sample "Word history to 1400"

The impact of Islam on south Asian society Researchers argue that Islam was introduced in the south Asian by trade contact with Indians. Another set of researchers believes that Islam was brought to Asia from the Arabian territories in the Middle East. There is also another group that believes that the Chinese, who carried trade activities in the south Asia, introduced Islam in the societies (Felipe 420). One of the greatest aspects of Islamization is the process of converting people from one religion to follow the Muslim religions.
During the time, many cultures were assimilated to the Muslim ways of living and worshiping. At the time Islam was introduced into the south Asian communities they had different ways of worshiping. Additionally, they had different sets of beliefs. They initially believed in the power of the invisible spirit. The spirit belonged to the people’s ancestors and nature. Both the spirits had their own ways in which they helped the living by influencing their fortunes on earth (Felipe 422).
On the introduction of Islam, all the beliefs and the ways of the natives were assimilated to the ways of Muslims (Felipe 428). Even so, at the time of the start, the rulers and their followers were not so strict about following the ways stipulated under the Muslim religion. Islam influence was present but not categorically strong as observed in the current world. For instance, not all people bought the idea of renouncing eating pork and not all people in the community engaged in the five times prayers as stipulated by the Islam religion within a day (Felipe 431).
One great achievement in terms of influence is the fact that the Islamic religion strived to achieve an Islamic society in the south Asian communities. The people who introduced the religion made sure that they created an influence in the nature of belief that people had (Xinru 84). They introduced Allah as the God of Islam and made sure that the people of south Asian community worshiped him. People adopted the expectations of Allah, and most of them set these expectations to guide them in their daily lives. The south Asian communities developed a code that binds them with Allah as their creator (Xinru 86).
For instance, men in the south Asian community adopted the Islamic inheritance code that stipulated that they should inherit `twice as much as women (Xinru 87). They were also supposed to support their wives, daughters, and sisters. The people of south Asian communities adopted the polygamous ways of life as Islam had allowed it. The people of south Asian communities adopted the code that stipulated that it was a sin to make symbolic representations of God (Allah). They adopted the Islamic architecture in their temples and other buildings as major religious contributions.
The people of south Islam communities and the leadership unions in these regions adapted to the Muslim manners of writing (Xinru 88). The leaders started balancing their patronage of Islam with international traders. There emerged the creation of urban mosques. On the same note, a basic adherence of Muslim religious laws became enhanced. Before the introduction of Islamic religion, people did not travel much because they believed that their own spirits could only get appeased at home. But after they were assimilated to the Muslim ways of life, they began to travel and engage in deep trade activities.
There is no difference in the manner the Islamic impacts affected south Asia and Africa. Consequently, the manner in which things were done and adopted in Asia took shape in Africa too (Xinru 96). People in Africa began to worship Allah as their creator and following all Muslim laws entirely, the same way the Asians deed. The only difference is the geographical spread of Islam in Africa. Some places were greatly assimilated to Islam while some parts got affected by the impacts of Islamic religion (Xinru 97).
Works Cited
Felipe Fernandez-Armesto, The World: A History, volume 1: to 1500. Penguin Academics/Pearson, 2011, ISBN: 978-0-205-75931-6.
Xinru Liu, The Silk Road in World History. Oxford University Press, 2010, ISBN: 987-0-19- 533810-2. Read More
Share:
Tags
Cite this document
(“Word history to 1400 Essay Example | Topics and Well Written Essays - 500 words”, n.d.)
Retrieved from https://studentshare.org/history/1650455-word-history-to-1400

CHECK THESE SAMPLES OF Word history to 1400

The Contrasting Period of the Dark Age and the Enlightenment Period

... The Contrasting Period of the Dark Age and the Enlightenment Period Perhaps the two most contrasting period in the history of mankind where human being’s potential and capacity for creativity and innovation was repressed and then later blossomed was during the Dark Age and the Enlightenment Period. It is contradictory that even the meaning and usage of the word is a direct opposition to the other with the root of enlightenment which is the light is directly opposed to the contrasted word “Dark”. It was during the Dark Age, around circa 5th to 15th AD, where religion and superstition pervaded and even sanctioned by the state and the church that almost all aspect of life was governed not by rational thinking, but by blind faith... to this was...
3 Pages(750 words)Term Paper

...of candidates. Woodside writes that by 1400, the system of examination was highly transparent. The candidates' answers passed through Collection, registration, collating, recording officers to the readers. The sequence took care to conceal examinee's name, copied his answers in other person's handwriting and that more than one examiner evaluated the answer sheets. To further improve the thought process and practical ability, the examiner and examinee both were limited by word counts to their questions and answers respectively (1-3, 17-22). Though the word 'modern' emerged for Charlemagne rule but Woodside feels that Tang Dynasty was more modern in political management. Similarly he...
5 Pages(1250 words)Book Report/Review

...Episode 5: “Protestantism – The Evangelical Explosion,” of the BBC documentary, “A History of Christianity: the First 3000 Years,” in six parts and narrated by Professor Diarmaid MacCulloch, is a concise recount of the rapid growth of the Evangelical Protestant branch of Christianity. This fast-paced episode exemplifies the spiritual need of people throughout six centuries, 1400 – 2000, one that still exists for many people in the 21st century. From the establishment of Protestant denominations, the outstanding feature, or belief, was in an emotional expression of a believer’s relationship with God. In the early history of the United States, there was the Second Great Awakening, Frontier...
1 Pages(250 words)Movie Review

...World History to 1400 Similarities between the Roman Empire and the Chinese Han Empire One of the similarities between the two empires can be derived from their origins. People from both empires did not know their origin, opting to create myth stories that explained where they could have originated. According to the Romans, Roman early history was connected to Troy in Asia Minor. Aeneas, a hero in that city in the war against the Myceneans was believed to have fled to Italy with some of his followers where they established what was later to be known as the Roman Empire. One of the most common stories of Chinese origins was the story concerning the god P’an Ku (Fernandez-Armesto...
2 Pages(500 words)Essay

...History of Art and Visual Culture 1400 - 1900 Introduction The history of art and visual culture between the 15th and the 19th century has always remained a complex topic among historian, scholar, painters and poet thereby demanding a significant focus on the relationships between the principal religious, social and political contexts. Therefore, not only does the study of the history of art and visual culture shaped the landscape of histological inquiry, thought and translation, but also the level at which cases could be made whether the painters were familiar with the treatises art and literature (Zirpolo, 2008). On a broader point of view, Raphaels Entombment (Rome,...
2 Pages(500 words)Essay

12 Pages(3000 words)Case Study
sponsored ads
Save Your Time for More Important Things
Let us write or edit the essay on your topic "Word history to 1400" with a personal 20% discount.
GRAB THE BEST PAPER

Let us find you another Essay on topic Word history to 1400 for FREE!