The IMF and the World Bank - Essay Example

Comments (0)
Add to wishlistDelete from wishlist
Cite this document
Summary
These governments have come to a consensus to have IMF’s capacity increased and policies designed to limit the use IMF resources removed. The IMFs members want…
Download full paperFile format: .doc, available for editing
HIDE THIS PAPERGRAB THE BEST PAPER98.1% of users find it useful 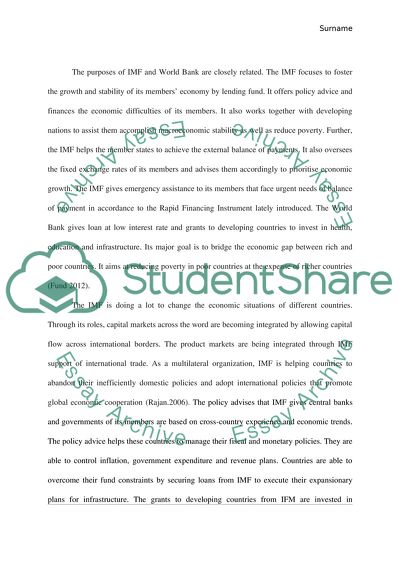 Extract of sample "The IMF and the World Bank"

International Monetary Fund The national governments still disagree over the response to the aftermath of the financial crisis facing the world. These governments have come to a consensus to have IMF’s capacity increased and policies designed to limit the use IMF resources removed. The IMFs members want to use both financial and non-financial resources of IMF to have their economies grow and stable (Breen p.4). The IMF and World Bank are financial institutions that were initiated together by 29 countries in 1944 at the conference of Bretton woods, Washington. The IMF came to birth in 1945. It is main goal was to help in reconstructing the international payment system of the world after World War II to address problems of the Great depression. As global economic institution, members of IMF could draw fund to improve or maintain economic activity in crises periods. IMF was to make sure that the borrowing countries could repay the debts on time.
The financial operation of IMF started in 1947 and May the same year France borrowed fund as the first country (Felix. 2010). Over the years, many countries have joined IMF especially after attaining political independence to improve international trade and economic stability. These countries have greatly benefited from IMF especially on economic matters. The system of Bretton woods prevailed until when the government of US suspended the convertibility of the dollar and its reserve in other states into gold in 1971. In 2010 and 2011, IMF participated in the Greek bailout amounting to €110 billion and €100 billion respectively.
The purposes of IMF and World Bank are closely related. The IMF focuses to foster the growth and stability of its members’ economy by lending fund. It offers policy advice and finances the economic difficulties of its members. It also works together with developing nations to assist them accomplish macroeconomic stability as well as reduce poverty. Further, the IMF helps the member states to achieve the external balance of payments. It also oversees the fixed exchange rates of its members and advises them accordingly to prioritise economic growth. The IMF gives emergency assistance to its members that face urgent needs of balance of payment in accordance to the Rapid Financing Instrument lately introduced. The World Bank gives loan at low interest rate and grants to developing countries to invest in health, education and infrastructure. Its major goal is to bridge the economic gap between rich and poor countries. It aims at reducing poverty in poor countries at the expense of richer countries (Fund 2012).
The IMF is doing a lot to change the economic situations of different countries. Through its roles, capital markets across the word are becoming integrated by allowing capital flow across international borders. The product markets are being integrated through IMF support of international trade. As a multilateral organization, IMF is helping countries to abandon their inefficiently domestic policies and adopt international policies that promote global economic cooperation (Rajan.2006). The policy advises that IMF gives central banks and governments of its members are based on cross-country experience and economic trends. The policy advice helps these countries to manage their fiscal and monetary policies. They are able to control inflation, government expenditure and revenue plans. Countries are able to overcome their fund constraints by securing loans from IMF to execute their expansionary plans for infrastructure. The grants to developing countries from IFM are invested in infrastructure to help reduce poverty. In addition, IMF offers training and technical assistance to help states improve on the management of economies.
Work cited
Breen, Mecheal. The politics of lending. New York: palgrave MacMillian, 2013. print.
The books details the different ideologies some national governments had on how to control financial crisis. The author describes some of the areas and strategies the governments agreed to use. The books describes the decision on removing policies that could limits utilization of its resources. Also The author points out at the politics behind IMF lending.
Felix, Kelly. International Monetary Fund (IMF) – Origins, Purpose, News & Gold. 2010. 28 05 2014. .
The website describes the origin of IMF which was as a result of outsourcing ideas that could help the creation of a body that could drive international monetary cooperation. It was the first international monetary system after the Second World War. It describes the objectives and purposes of the International Monetary Fund. It also shows how the IMF works, its voting system, and its loan programs.
Fund, The International Monetary. What we do. 05 2012. 28 05 2014. .
The source is the international monetary website. It describes the various roles IMF has taken in shaping the world’s economy particularly after the Second World War. It outlines various policies it uses in advising and financing the members who are in economic difficulties. The website describes how it promotes international monetary cooperation and stability by conducting economic surveillance.
Rajan, Raghuram G. The IMF in A Changing World. 17 05 2006. 28 05 2014. .
The website contains a speech given by Raghuram G. Rajan, a director of research and economic counsellor. He gives the speech at an international conference in Arison School of Business. His speech is aimed at discussing what organizations such as the IMF can do in the financial world that is rapidly changing. It is a world which capital markets are becoming more integrated while technology allows the provision of services while at a distance. Read More
Share:
Tags
Cite this document
(“The IMF and the World Bank Essay Example | Topics and Well Written Essays - 500 words”, n.d.)
The IMF and the World Bank Essay Example | Topics and Well Written Essays - 500 words. Retrieved from https://studentshare.org/history/1648068-the-imf-and-the-world-bank

“The IMF and the World Bank Essay Example | Topics and Well Written Essays - 500 Words”, n.d. https://studentshare.org/history/1648068-the-imf-and-the-world-bank.
Comments (0)
Click to create a comment or rate a document

CHECK THESE SAMPLES OF The IMF and the World Bank

THE IMF AND WORLD BANK

...? The IMF and World Bank: What the critics have to say Fatemeh Araeipour Econ 335-10, MW: 2:30-3:45 Dr. Nasser September 26, Do not focus too much on the functions of these institutions. Refer to the provision of Public goods . Look at the criticisms as presented by J. Stiglitz. Show how these institutions interact with distressed countries. Define the term " institution"? The IMF and the World Bank “The International Monetary Fund (IMF) and the World Bank are institutions in the United Nations system and are composed of member countries, 188 countries. Their approaches to this goal are...
5 Pages(1250 words)Essay

...INTRODUCTION For years, United s has been accused of employing all its efforts to gain economic, political and diplomatic dominance over theentire world. United States has acquired its hegemonic position among all the economically powerful countries in a shrewd and savvy manner that nobody even claims to challenge its policies and activities. It has utilised all the power it has from military to monetary in order to become the greatest decision-maker in the world. It has never missed the opportunity to display to the world that it can go any extent to maintain its hegemonic position over every single country. The leading international financial institutions in the world being the IMF and the World Bank also have been subject... to such...
30 Pages(7500 words)Dissertation

...October 2007 IMF-World Bank Annual Meeting The International Monetary Fund (IMF) and its sister organization the World Bank held their most recent annual meeting in October 2007. The meeting focused on two main topics: The state of the world economy. Implementation of the Fund's medium term strategy, i.e. reform of voice and vote. Threats to Future Global Economic Growth Here in this write-up, we will look at a few prominent threats, risks, and challenges to the global economic growth. These include: potential implications of the prevailing credit crunch situation, globalization, and infrastructure. One of the immediate threats, as identified by the Chairman of the Board - Karim Djoudi - in his opening address at the meeting... ...
4 Pages(1000 words)Essay

...World Bank and IMF Policies in Developing Countries The IMF policy of macroeconomic stabilization and the World Bank policies of structural adjustment are very unpopular in developing countries. Critically discuss the economic rationale for the dislike of these policies in these countries. Introduction In the post world war two years, the capitalist world in particular and the western world at large have been faced with several important economic problems like inflation, currency crises and third world debt. These problems are simply magnified in nature when their...
4 Pages(1000 words)Essay

The Role and Functions of the IMF and the World Bank

The role of the IMF & World Bank

...Understanding The Changing Role Of The World Bank And The International Monetary Fund And How They Evolved To Go With The Changing Times I. Introduction World Bank and the International Monetary Fund (IMF) are two of the most important organizations that helped shaped and strengthen the international relations of nations. They focus on stabilizing the international financial scene and helping nations achieve sustainability in terms of development. In the globalization era, the World Bank and the IMF play vital roles in shaping the economic, political and social state of affairs of nations. If we take a...
10 Pages(2500 words)Essay

The World Bank and IMF effects on developing countries

...The Minister of Finance of Pell. Issues surrounding Pell and IMF 15th March, Is Pell Eligible for Additional Funding from the IMF? If so, which Type? What Kinds of Conditions May be Attached? Pell is eligible for additional funding from the International Monetary Fund (IMF) because it is a full member of the world organization. Further, it is specified in its agreement where the IMF purpose is to make provisional financial resources accessible to associates under “adequate preserve”. It also helps to reduce the period and degree of global payment differences of the members. These IMF agreements will enable Pell to get additional funding...
1 Pages(250 words)Assignment

Compare the IMF and the World Bank

...The IMF and World Bank Compare the IMF and the World Bank Introduction Both the World Bank and the international monetary fund (IMF) are United Nations institutions. These two institutions have a common goal which is to raise and improve the living standards in their member states. However, although their approaches towards this objective are different, they are complementary on a broader spectrum. As such, whereas the World Bank focuses on poverty reduction and long term economic development, the IMF concentrates on only the...
4 Pages(1000 words)Essay

...Principle of conditionality as applied by the IMF and the World Bank Introduction The development of economies worldwide has been related with a series of factors; the ability of the states to administer their sources and proceed to strategic alliances has been proved to be of critical importance for the stabilization of their political, social and economic conditions. However, not all countries have equal potentials to keep stable their economy – a factor affecting also the political and social conditions of states internationally. Current paper focuses on the examination and the evaluation of the principle of conditionality in regard with the International Monetary Fund (IMF) and the World Bank. Both these organizations use... the...
10 Pages(2500 words)Research Paper
sponsored ads
Save Your Time for More Important Things
Let us write or edit the essay on your topic "The IMF and the World Bank" with a personal 20% discount.
GRAB THE BEST PAPER

Let us find you another Essay on topic The IMF and the World Bank for FREE!