Comments (0)
Add to wishlistDelete from wishlist
Cite this document
Summary
The economic and political history of china can be traced back to thousands of years which have trends of affluence and economic decline. The different systems over the different periods in time have similarities and distinct characteristic. …
Download full paperFile format: .doc, available for editing
HIDE THIS PAPERGRAB THE BEST PAPER95% of users find it useful 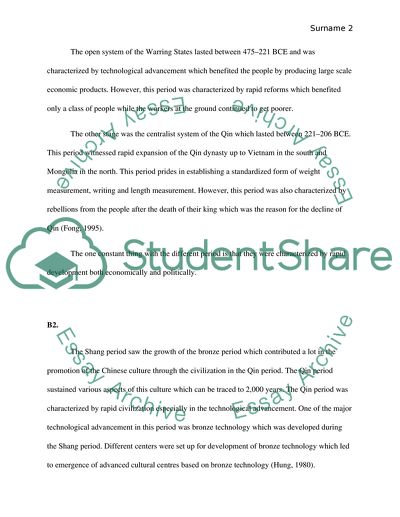 China History A1. The economic and political history of china can be traced back to thousands of years which have trends of affluence and economic decline. The different systems over the different periods in time have similarities and distinct characteristic. The Shang dynasty can be traced around 1200BC and agriculture was the staple economic activity of the Chinese. The political ruling class was governed by the Shang royal family where the kings served both religious and political functions. This stage was beneficial as it led to formation of commerce such as textiles or bronze. However, it had a lot of conflicts with the Zhou (Fong, 1995).
The feudal system of the Zhou was around 1045BC and came into being after defeating the Shang. Their economic activities were characterized by a well-defined system where noble men owned the lands while the peasant families were responsible for tiling. This phase had benefits of improving the commerce since it was commercialized. However, it led to class difference where a class of wealth merchants emerged.
The open system of the Warring States lasted between 475–221 BCE and was characterized by technological advancement which benefited the people by producing large scale economic products. However, this period was characterized by rapid reforms which benefited only a class of people while the workers at the ground continued to get poorer.
The other stage was the centralist system of the Qin which lasted between 221–206 BCE. This period witnessed rapid expansion of the Qin dynasty up to Vietnam in the south and Mongolia in the north. This period prides in establishing a standardized form of weight measurement, writing and length measurement. However, this period was also characterized by rebellions from the people after the death of their king which was the reason for the decline of Qin (Fong, 1995).
The one constant thing with the different period is that they were characterized by rapid development both economically and politically.
B2.
The Shang period saw the growth of the bronze period which contributed a lot in the promotion of the Chinese culture through the civilization in the Qin period. The Qin period sustained various aspects of this culture which can be traced to 2,000 years. The Qin period was characterized by rapid civilization especially in the technological advancement. One of the major technological advancement in this period was bronze technology which was developed during the Shang period. Different centers were set up for development of bronze technology which led to emergence of advanced cultural centres based on bronze technology (Hung, 1980).
The bronze made during the Qui period was heavily made influential in making expensive jewelry. This period had bronze decorated and artistically made since the craftsmen which were responsible for this development were endowed with technological skills and technical skills which was developed during the civilization era in the open system of the Warring States. This enabled them to improve the culture of the Chinese people in the bronze trade by diversifying the uses of the bronze not only in the making of weapons and tools but in the artistic making of jewelry and beauty accessories (Hung, 1980).
Bronze is a major cultural phenomenon of the Chinese people which was developed during the Shang period. However, there are several instances of this culture in the Qin period. Some of the aspects of the Chinese culture which were dropped include the bronze vessels called the taotie.
Works Cited
Wen C. Fong, ed., The Great Bronze Age of China: An Exhibition from the People’s Republic of China. New York: Metropolitan Museum of Art; Knopf, 1980.
Wu Hung. Early Chinese Art and Architecture.Stanford: Stanford University Press, 1995. Print. Read More
Share:
Tags
Cite this document
(“China History assignment Essay Example | Topics and Well Written Essays - 500 words”, n.d.)
China History assignment Essay Example | Topics and Well Written Essays - 500 words. Retrieved from https://studentshare.org/history/1646327-china-history-assignment

...China has had a remarkably stable history, with large governments which were usually only interrupted by brief periods between them. This is in stark contrast with the European mould where the fall of an empire, the Roman Empire for example, would be permanent. There are a huge variety of reasons for this trend in history. One is that China is relatively contiguous, featuring few major geographic boundaries that would form distinct provinces able to distance or defend themselves from each other, and yet is also relatively isolated from the rest of the world, with the Gobi Desert and the Mongolian highlands to the west, the Himalayas to the south west, tundra to the...
16 Pages(4000 words)Coursework

...Globalization in China It is agreeable that globalization is the objective trend of the modern world’s economic development, characterized by optimized allocation and free flow of technology, service, capital, and information in the global context. Most if not all countries of the world have realized that for them to achieve economic development they need to embrace globalization. Over the years, there has been a perception that China’s policies seem to seek development and prosperity in isolation. This perception has been disregarded by most Chinese who argue that they have learnt from their country’s long history that isolation often results to backwardness especially considering its...
22 Pages(5500 words)Essay

...?One of the darker aspects of history, and in all history specifically, is the fact that key powers are willing to engage in almost any and every process as a means of furthering economic and political power. When there arises a situation in which a dominant/Imperial power has the potential to exercise both a political and economic level of power and dominance over another, it is almost invariably the case that this exercise of will is leveraged. Within the case of the British Empire and the means by which China was a target of a protracted economic and political war in the 18th century, one must first seek to understand why the British were interested in attempting to smuggle opium into China in the first place, how China reacted... )....
3 Pages(750 words)Essay

...? History of China History of China First and Second United Front The first united front comprised of alliance between Kuomintang (KMT) and Chinese Communist Party (CCP). The alliance was formed in 1923 with the aim of ending warlordism in China. CCP took advantage of superiority of KMT in spreading communism. On the other hand, KMT used CCP to control communism from within the country. This resulted into diversity of interests for the alliance; hence the Front became unsustainable. The Nationalist Field Marshal purged the Communist from the Front, and this initiated civil war between KMT and CCP, and this lasted until the formation of Second United Front...
3 Pages(750 words)Essay

...? History of China Question Charismatic Mao Zedong led the communist party of China from 1931 to 1976. Mao Zedong led the Chinese Communist Army inthe year 1934 during the war with Nationalist Kuomintang Forces of China. During the Long March, Communist Army of China retreated across China by covering thousands of miles. The Chinese Communist Army defeated Japanese Forces during the Second World War. At that point of time, the communists turned on Kuomintang. In the year 1949, they established People’s Republic of China. Mao Zedong followed communism throughout his life. Moreover, he motivated several communists to follow...
3 Pages(750 words)Essay

...Introduction The changing dynamics between Taiwan and the Peoples Republic of China pose difficult competing challenges for the United States of America such as what foreign, social and economic policies should the United States adopt if Taiwan or Peoples Republic of Chine drift apart. While the policy by the United States has remained almost unchanged for most of the period under consideration, the circumstances they are always designed to address have changed dramatically. These include the complex political changes that have occurred in both Taiwan and PRC such as changes in the military balance and change of economic fortunes as well as the connection of economic interests. The situation in China...
5 Pages(1250 words)Essay

..., despite its strength of force and efficient use of terror. Finally Mao died in 1976 but left a mark on the history of China. Failure of Chairman Mao Mao had difficulty during his time to establish a successful domestic economic and social policy for China. In 1958, Mao placed a Great Leap Forward, which was mainly a trial to break with the Russian model of Communism and to fill the Chinese people with renewed radical energy. Approximately 20-30 million people died in the food crisis as the program badly failed, between the years 1958-61. Thus, Mao withdrew temporarily from public view. As the result of the failure, help from Soviet Union also ended which was another shock for...
4 Pages(1000 words)Essay

...assignment was due: Japan & China history (Japan) The 20th century especially and for the sake of this paper, its second half, greatly saw Japan emerge as an economic success. This was a tumultuous period that saw ideological transformation in full force. This turn around was as a result of an ideological shift in the way Japan as a country viewed the rest of the world and the way it operated in it. It was also out of the reality at the time that the world was a fast changing economic arena that required a country to not only adapt to it but to also sought ways of moving ahead in time to counter the inevitable changes (Johnson 1986). The onset of 1952-1991 period is quite well considered...
7 Pages(1750 words)Essay

...History assignment The First Crusades The first crusades were caused by the capturing of Jerusalem in 1076 bythe Muslims and this was an attempt to recapture Jerusalem by the Christians. Generally, the first crusades were held during the political and social transitions in the 11th century in Europe. This involved the rise of a reform movement within the papacy, the political and religious confrontation of Christianity and Islam in Europe and the Middle East (Shepkaru 2). The first crusades were compelled by the happenings in the religious and political settings. The Beginning of the First Crusades In 1094, the Byzantine Emperor got to the conclusion that the Byzantium was too weak to take its lost...
2 Pages(500 words)Assignment
sponsored ads
Save Your Time for More Important Things
Let us write or edit the essay on your topic "China History assignment" with a personal 20% discount.
GRAB THE BEST PAPER

Let us find you another Essay on topic China History assignment for FREE!