What part was played by ceremonial, ritual and physical display in the exercise of late-medieval lordship and/or kingship - Assignment Example

Comments (0)
Add to wishlistDelete from wishlist
Cite this document
Summary
In the late medieval lordship, ceremonies, and rituals played a very big role, as they were common features of the human life and helped to build the monarchy. They signified important events in society including death, marriage, and birth, among others. Ceremony and rituals…
Download full paperFile format: .doc, available for editing
HIDE THIS PAPERGRAB THE BEST PAPER93.8% of users find it useful 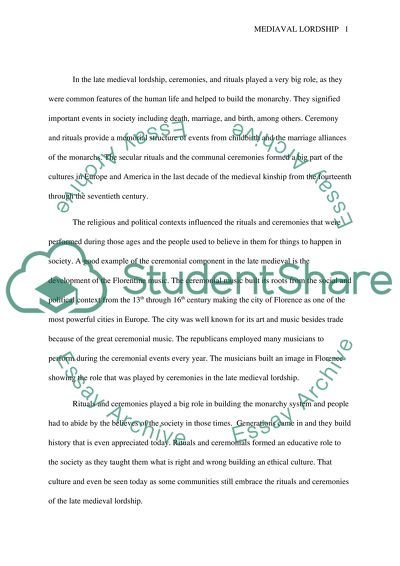 Extract of sample "What part was played by ceremonial, ritual and physical display in the exercise of late-medieval lordship and/or kingship"

CEREMONIAL ROLE IN THE LATE MEDIEVAL LORDSHIP   In the late medieval lordship, ceremonies, and rituals played a very big role, as they were common features of the human life and helped to build the monarchy. They signified important events in society including death, marriage, and birth, among others. Ceremony and rituals provide a memorial structure of events from childbirth and the marriage alliances of the monarchs. The secular rituals and the communal ceremonies formed a big part of the cultures in Europe and America in the last decade of the medieval kinship from the fourteenth through the seventieth century.
The religious and political contexts influenced the rituals and ceremonies that were performed during those ages and the people used to believe in them for things to happen in society. A good example of the ceremonial component in the late medieval is the development of the Florentine music. The ceremonial music built its roots from the social and political context from the 13th through 16th century making the city of Florence as one of the most powerful cities in Europe. The city was well known for its art and music besides trade because of the great ceremonial music. The republicans employed many musicians to perform during the ceremonial events every year. The musicians built an image in Florence showing the role that was played by ceremonies in the late medieval lordship.
Rituals and ceremonies played a big role in building the monarchy system and people had to abide by the believes of the society in those times. Generations came in and they build history that is even appreciated today. Rituals and ceremonials formed an educative role to the society as they taught them what is right and wrong building an ethical culture. That culture and even be seen today as some communities still embrace the rituals and ceremonies of the late medieval lordship.
Bibliography
anner, N. P., 2009. The ages of faith popular religion in late medieval England and Western Europe. London: I.B. Tauris ;.
Clark, L., 2004. Political culture in late medieval Britain. Woodbridge: Boydell.
Lehavi, S., 2011. Street scenes: late medieval acting and performance. New York: Palgrave Macmillan.
Levy, I. C., 2006. A companion to John Wyclif late medieval theologian. 2006: Brill.
McGee, T. J. & Timothy , J. M., 2009. The Ceremonial Musicians of Late Medieval Florence. [Online]
Available at: http://www.iupress.indiana.edu/product_info.php?products_id=84819
McSheffrey, S., 2006. Marriage, sex and civic culture in late medieval London. Philadelphia: University of Pennsylvania Press.
Petkov, K., 2003. The kiss of peace ritual, self, and society in the high and late medieval West. Leiden: Brill.
Pollard, A. J., 2000. Late medieval England, 1399-1509. Harlow, England: Longman.
Stanford, C. A., 2011. Commemorating the dead in late medieval Strasbourg the cathedrals book of donors and its use (1320-1521). Farnham, Surrey, England: Ashgate Pub..
Stevenson, J., 2010. Performance, cognitive theory, and devotional culture: sensual piety in late medieval York. New York, NY: Palgrave Macmillan.
Tanner, N. P., 2009. The ages of faith popular religion in late medieval England and Western Europe. London: I.B. Tauris ;. Read More
Share:
Tags
Cite this document
(“What part was played by ceremonial, ritual and physical display in the Assignment”, n.d.)
What part was played by ceremonial, ritual and physical display in the Assignment. Retrieved from https://studentshare.org/history/1644289-what-part-was-played-by-ceremonial-ritual-and-physical-display-in-the-exercise-of-late-medieval-lordship-andor-kingship

“What Part Was Played by Ceremonial, Ritual and Physical Display in the Assignment”, n.d. https://studentshare.org/history/1644289-what-part-was-played-by-ceremonial-ritual-and-physical-display-in-the-exercise-of-late-medieval-lordship-andor-kingship.
Comments (0)
Click to create a comment or rate a document

CHECK THESE SAMPLES OF What part was played by ceremonial, ritual and physical display in the exercise of late-medieval lordship and/or kingship

...is quite necessary in any healing process. Support from loved ones coupled with courage and the possibility of a better future helps patients a superb deal. Many of the patients subjected to rehabilitation psychologists lack this much needed support at times due to their age. These barriers together incapacitate the endeavors of a physical rehabilitation more so when dealing with the aged in society (Didier, & Bigand, 2010). However, since the aged are still a part of society, implementation of a vital solution that will negate all the misgivings is necessary. For instance, it is beneficial when the psychologists own a park where patients can walk freely and exercise. Counseling and...
5 Pages(1250 words)Research Paper

...antidepressant effect, enhance mood and intervene in various mental illness related to stress. Physiological theories explain the action of exercises on various body parts, including the brain, to trigger the release of hormones that decrease stress through improvement of one’s moods or reducing anxiety. Psychological theories also attest to positive impact of exercises on stress management. My personal experience further affirms the positive impact of exercises as mood enhancers and hence their role in reducing stress. Despite their positive impact, exercises should be done to the habitual level with caution not to cross into compulsiveness, which would...
6 Pages(1500 words)Term Paper

...R.Preeti 28/4/2007 Physical Exercise Introduction In today's fast-paced modern world, manhas no time to repose or lead a more relaxed life. He continue in pursuit of work, career building, fulfilling family responsibilities and financial stability. In this maddening rush and busy life, one loses out on important activities, like adequate food, sleep, relaxation and of course, physicalexercise. Due to this, man's life has been plagues by lethargy, fatigue and varied forms of diseases. However, one needs to realize that physicalexercise and activity is just as ...
2 Pages(500 words)Essay

...ialondside examples of paintings or art that explain the reason. 1. For worship puposes 2. For beauty and splendor 3. To display wealth and power 4. To display emotions or feelings 5. For astrology and other beliefs 6. To display time and events 2.) Discussion Questions: Music Grogian chant a form of liturgical chant that was used in the western Christianity, it was mostly played during mass celebration and at ritual rights. It was formed by Pope Gregory who was the acting pope from the year 590 -604, he was well known for his categorization of music to be played during specific events in the church. The Grogian chant is some...
1 Pages(250 words)Essay

...MEDIEVAL WARCRAFT PART 13 The attack of Chateau Gaillard is considered as one of the most outstanding seizures in the medieval era. This is because there were several factors that came together to inform the outcome of the famous siege. Politically, there was a display of the might of one kingdom against the other. In the days, the French were generally perceive to be politically well motivated than the English (Castle Battle, 1978). It is not surprising that this notion and general perception translated into empirical success for Phillip II. Indeed, technology abounds today and it is not known to have existed in the medieval days but there was much use of technological ideas and implications in the days of the attack. For example... in the...
1 Pages(250 words)Essay

...Ceremonial Speech: A Tribute to Steve Jobs Everyone with an iPod, an iPhone, or the tablet computer called iPad (with an ‘a’) would, in all probability, know of the man who was instrumental for these technological gadgets’ inventions. The one and only Steve Jobs is a genius in his own field of endeavor who revolutionized the world with his innovative thinking and sleek but strict leadership style. Due to the products that became part of this generation’s everyday life, it is as if each person has a strong bond established with this remarkable man. Those who worked with him at Apple Inc. could attest to his personality quirks, such as being temperamental or overly zealous for results. As Doug Harty...
1 Pages(250 words)Essay

Physical activity and health and physical fitness and exercise

...Physical Activity and Health, Physical Fitness and Exercise Lack of exercise is an habit that may be very vital to us, yet sometimes it seem to us like we’re enjoying life when we can do most of the things we want at a sitting without much movement. The habit leads to rise in cardiovascular diseases as well as putting on of too excessive weight or obesity. Research shows that too little attention could have been given to unhealthy weight gain (Erlichman, Kerbey, & James, 2002). Other than obesity, an inactive lifestyle has been linked to many other diseases. This kind of lifestyle where there is minimal or reduced activity is associated with the industrial development which has seen the invention of automobiles like motor vehicle... the...
1 Pages(250 words)Assignment

What part was played by ceremonial, ritual and physical display in the exercise of late-medieval lordship and/or kingship

... ROLE PLAYED BY CEREMONIAL, RITUAL AND PHYSICAL DISPLAY. The late medieval kingship was characterized by persistent efforts to embrace religion in bid to stabilize and drive the society in a particular direction. The kings commissioned works in vernacular and even went to an extent of displaying the same in visual arts and drawings on the window panes and stained glass. This is a clear portray of believe in a religion and membership of a secular power especially in England in the late-medieval. The use of imagery and the Christianity language provided the promotion of loyalty, improved the social atmosphere and promoted the mutual coexistence between the French and Britons. It also yielded to improved unity in the unstable times... that was...
1 Pages(250 words)Essay

...their benefits and features where the main objective is to engage, attract and stimulate the shopper towards making an acquisition. In the 21st century, the internet has played a major role in taking away the customers, as most of them now prefer to shop online (Pegler, 2011. P, 43). Therefore, the window display has become the most effective way to attract customers not only as a mode of communication, but also show casing the products that the company is selling. This is essay will examine how communication of window displays are effective and the essay will focus on the House of Chanel to make the analysis, especially now that were are nearing Christmas. Window...
6 Pages(1500 words)Essay

...Architect of the Century Frank Lloyd Wright Introduction: Hey, today the topic I have selected for my speech is about Frank Lloyd Wright, the “Architect of Century” who made long lasting name in his profession by constructing some historical buildings in across the globe but mostly in Chicago that is The United States of America. The lesson for us in this speech is that one should select such a profession where his/her capabilities will shine. The information in this script is retrieved from the sources cited below that could be easily accessed from the web. Body: Main Point: The person who was considered as the architect of the century was Frank Lloyd Wright who was born on June 8th, 1867 in Rich Land Center Wisconsin. He... of the Century...
2 Pages(500 words)Essay
sponsored ads
Save Your Time for More Important Things
Let us write or edit the assignment on your topic "What part was played by ceremonial, ritual and physical display in the exercise of late-medieval lordship and/or kingship" with a personal 20% discount.
GRAB THE BEST PAPER

Let us find you another Assignment on topic What part was played by ceremonial, ritual and physical display in the exercise of late-medieval lordship and/or kingship for FREE!