Comments (0)
Add to wishlistDelete from wishlist
Cite this document
Summary
The settlement is home to more than 1 million people. Mumbai is one of the cities in the world with the highest house rents. Dharavi offers cheap accommodation to those who are not able to pay the high rents. The Indian…
Download full paperFile format: .doc, available for editing
HIDE THIS PAPERGRAB THE BEST PAPER91.7% of users find it useful 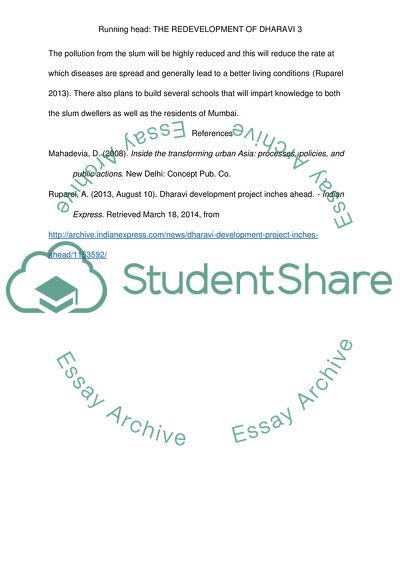 Extract of sample "Megacities in Asia"

The Redevelopment of Dharavi al affiliation The Redevelopment of Dharavi Dharavi is one of Asia’s biggest informal settlements. The settlement is home to more than 1 million people. Mumbai is one of the cities in the world with the highest house rents. Dharavi offers cheap accommodation to those who are not able to pay the high rents. The Indian government started a multi-billion dollar plan a decade ago to redevelop the Dharavi. The area has been divided into five sections that will be developed by investors who emerge tops from a competitive bidding process (Mahadevia 2008).
The major stakeholders in the redevelopment of Dharavi include the slum dwellers, land owners and the citizens. The slum owners aspire to get better houses, healthcare, infrastructure and social cultural facilities. The citizens are concerned with the general hygiene, how tax payers’ money is being used and the crime rates. The landowners on the other hand, are concerned with the financial loss and encroachment (Ruparel 2013).
The residents of Mumbai are likely to benefit from the low cost houses that will be on offer once the redevelopment is completed. They are also set to benefit from the infrastructure that Dharavi will be offering. E.g. Recreation amenities, healthcare facilities, better infrastructure, including the railway line and the roads, this will make the city to be more accessible. The redevelopment of Dharavi will reduce the crime rates as most of the slum dwellers will get employed in the new marketplaces. The quality of life in the city of Mumbai will improve after this project is finally completed. The pollution from the slum will be highly reduced and this will reduce the rate at which diseases are spread and generally lead to a better living conditions (Ruparel 2013). There also plans to build several schools that will impart knowledge to both the slum dwellers as well as the residents of Mumbai.
References
Mahadevia, D. (2008). Inside the transforming urban Asia: processes, policies, and public actions. New Delhi: Concept Pub. Co.
Ruparel, A. (2013, August 10). Dharavi development project inches ahead. - Indian Express. Retrieved March 18, 2014, from
http://archive.indianexpress.com/news/dharavi-development-project-inches-ahead/1153592/ Read More
Share:
Tags
Cite this document
(“Megacities in Asia Assignment Example | Topics and Well Written Essays - 250 words”, n.d.)
Megacities in Asia Assignment Example | Topics and Well Written Essays - 250 words. Retrieved from https://studentshare.org/history/1634286-megacities-in-asia

CHECK THESE SAMPLES OF Megacities in Asia

...?Comparison of two Asian Mega cities This study compares two Asian mega cities ly Mumbai and Bangkok that emerged as metropolises as a result of globalization and the rise of urban Asia. Globalization opened doors to innumerous opportunities for the skilled and the unskilled labor in general. The Asian cities became capable of offering variety of economic opportunities to their people. Consequently, these cities started getting crowded and industrialization reached its peak. Substantial movement of population from rural to the urban areas became one of the major reasons of Asian urban growth. Also the internal migration brought about a rapid change with regard to the economical, social, political and demographic aspects...
5 Pages(1250 words)Term Paper

...Buddhist tradition in diverse periods of the religion’s existence. This paper is a critical examination of social engaged Buddhism movement in Asia, with focus on Shinran and Takagi Kenmyo, two of the earliest influential Buddhists, from whom Thich Nhat Hanh founded the concept of engaged Buddhism movement. Engaged Buddhism In Thich’s perspective, social and economic interdependence are some of the most fundamental elements of Buddhism. Therefore, caring for one another and taking an active role in enhancing and shaping the future of one’s country is the duty of every Buddhist in the society (Shigaraki, 63). According to Kraft, Thich was a pacifist and he strongly opposed any kind of war and conflict. During this time,...
8 Pages(2000 words)Essay

English Only: Press No - Editorial in Los Angeles Times

...Megacities in Asia Megacities in Asia In Bangladesh, arsenic contamination of groundwater was first detected in 1993 and was later addressed by the government as a national disaster. Groundwater can get arsenic contamination sporadically either by industrial or natural means. The presence of arsenic complexes in soil contributes to its natural occurrence in groundwater due to the fact that it can easily be freed from the complexes. Owing to its high mobility in soil, once it is freed from the complexes, arsenic often results in the contamination of groundwater. Most of Bangladesh’s regions are made up of deltaic and alluvial sediments that contain pyrite, and they have...
1 Pages(250 words)Essay

.... Though this was faced with frequent cases on sunshine rights, the government was able to move the communities out of the city to suburbs by buying the land in central Tokyo (Sorensen 2003, p527). The rapid growing population meant more commutes per day. The government developed subways, overpasses and wide roads across the city to ease transport. As busy as the city is, traffic was a major factor. The solution to this problem was an understanding between the government, developers and the general public on the need to develop the city. Any chance of creating pace in Tokyo is deemed important since there is more demand for offices and residential houses. The model used in Tokyo can be applied in other cities in Asia....
1 Pages(250 words)Assignment

...Megacities of Asia-Korea Affiliation: What impact do you think Koreas "ubiquitousconnectivity" has on its technology industry? The "ubiquitous connectivity" has propelled the technology of Korea further ahead of the whole world and will still continue to do so at the rate it is developing. The ubiquitous connectivity implies that technology is everywhere in the country and is used to connect people and propel their lives. This kind of technology applies pressure to the technology developers to provide even more and better upgraded and updated versions as people have gotten “addicted” to technology. The numerous companies in the technology industry will have to work round the clock to also eliminate...
1 Pages(250 words)Assignment

...Megacities of Asia Megacities of Asia It is vital to remember the many forms through which gender inequality can occur. First, inequality or bias between men and women cannot be overcome and confronted by any one set of wide-ranging remedy. Secondly, in due course, a country can shift from one form of gender inequality or bias to harboring other types of that inequity or bias. Sen (2001) argue that education has played a key role easing inequality or bias in East Asia. Asians have used education to enlighten the mind and also spread information. Before education, women were heavily discriminated in Asia. As Sen (2001) discusses, women...
1 Pages(250 words)Assignment

...﻿Asia Contemporary global issues have a large effect on the overall relations between nations. Additionally, these relations extend to affect the way that conflicts are resolved, and any inappropriate conflict resolution method can easily lead to a worse situation and further degeneration of world peace. Overall, there are various internal politics that form the core of any international intervention of whatever kind. While in some instances it is for the betterment of the society in question, in other instances it leads to devastation and turns out to be retrogressive. Both of these instances are touched on in Arne Westad’s The Global Cold War. In Creating the Third World: The United States Confronts Revolution, the...
2 Pages(500 words)Book Report/Review
sponsored ads
Save Your Time for More Important Things
Let us write or edit the assignment on your topic "Megacities in Asia" with a personal 20% discount.
GRAB THE BEST PAPER

Let us find you another Assignment on topic Megacities in Asia for FREE!