Comments (0)
Add to wishlistDelete from wishlist
Cite this document
Summary
Public administration is concerned with the implementation of government policy, and is an academic discipline that studies this implementation and prepares civil servants for working in the public service. As a "field of inquiry with a diverse scope" its "fundamental goal…
Download full paperFile format: .doc, available for editing
HIDE THIS PAPERGRAB THE BEST PAPER93.9% of users find it useful 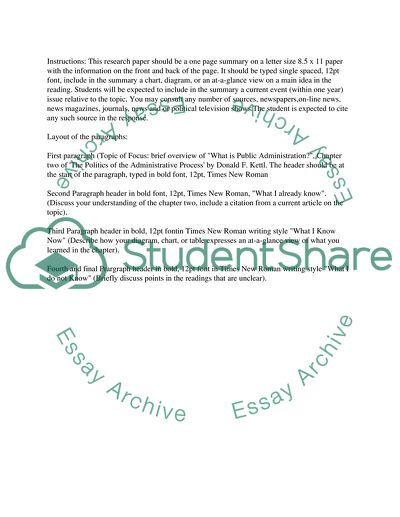 Extract of sample "What is Public Administration"

CHECK THESE SAMPLES OF What is Public Administration

...?Public Administration: The Federal Prison System Section Defining current policy issue Introduction: The prison system in the United s typically strives to accomplish two basic objectives: punish the offenders and strive for rehabilitation of the prisoners. The Federal Bureau of Prisons which operates under the Department of Justice comprises of various institutions, regional offices, staff training centers as well as community correction offices and houses over 218,107 federal offenders as of August, 2012. The BOP facilities currently comprises of 177,042 prisoners while those confined in privately managed security facilities totaled 28,507. Other contract based facilities housed a total of 12,558 inmates according to the latest... in the...
9 Pages(2250 words)Essay

What is Public administration

...Public Administration It has been suggested that governing systems in the public sector are influenced and sometimes even controlled by a few wealthyand powerful individuals. This normally places public administration officials in a dilemma since they do not know whether to serve the interests of the rich and powerful or concentrate on the interests of the broader public. There are several theories that have been used to describe public administration practices (Farmer 49). Alexander Hamilton The Hamiltonian tradition of Public Administration is made up of four pillars,...
4 Pages(1000 words)Research Paper

...ID Lecturer Public Administration Public administrators have a huge responsibility to defy the odds that seemingly stand in their way. This means that their working methodologies should be such that the public at large receives the maximum benefits. However, with the changing dynamics of public administration, this is not the case as such. There are more issues than one can think of, and if these are seen from the delivery of value for the sake of the public, then the astounding manner in which public administration is being handled is something to take note of. The...
2 Pages(500 words)Essay

...Public Administration Public Administration Utilitarianism is an action that leads to the proper of action by which happinessin achieved. The overall happiness is always determined by the outcome of the action putting all the consequences into consideration. The term can also be described as any action in which the doers obtain maximum satisfaction in doing it in addition to having attained the intended happiness (Stillman, 2009). With reference to the discussion questions given, this paper will assess the how a person can encompass morality in their day to day lives to make the world a better place for each and every one (Stillman, 2009). Guided by morality, an...
5 Pages(1250 words)Essay

...Public Administration al Affiliation This document discusses public administration theories that have evolved over time, embracing each other’s ideas, criticizing, and rejecting to form newer perspectives according to changes in the environment based on social, economic, and political aspects. Public administration (PA) has been one aspect of the administration field, focused on addressing public interests through the public policies. It has been divided into three branches namely; classical public administration, post modern public...
9 Pages(2250 words)Research Paper

...Unit V-Article Review Article Review This study was conducted with the purpose of identifying how managers in public administration settings can motivate their subordinates to perform actions that are backed with purpose. The study was empirical in nature and tried to answer various research questions. The first question that the study aims at answering is whether the managers or leaders in public organization need to focus more on internal or external motivational factors and to what degree should these factors be taken into consideration (Wright et al., 2012). The second question that the study aimed at answering what are the contributions that leaders need to make in...
2 Pages(500 words)Case Study
sponsored ads
Save Your Time for More Important Things
Let us write or edit the research paper on your topic "What is Public Administration" with a personal 20% discount.
GRAB THE BEST PAPER

Let us find you another Research Paper on topic What is Public Administration for FREE!