Comments (0)
Add to wishlistDelete from wishlist
Cite this document
Summary
In the paper “Holocaust Survivor” the author compares the memorial with those established more recently for the Roma/Sinti (Gypsies) and the Lesbians/gays. They are also found in Berlin but are on a much more modest scale. The author needs to check the internet for information on them…
Download full paperFile format: .doc, available for editing
HIDE THIS PAPERGRAB THE BEST PAPER93.6% of users find it useful 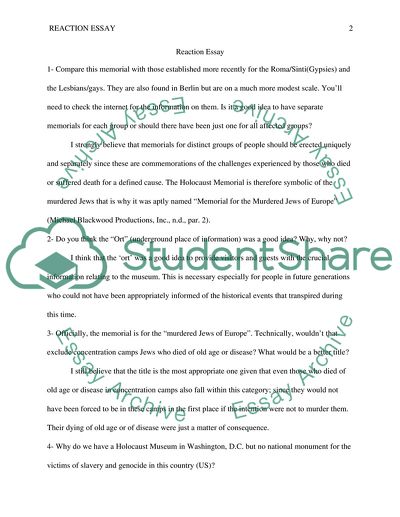 Reaction Essay al Affiliation Reaction Essay Compare this memorial with those established more recently for the Roma/Sinti(Gypsies) and the Lesbians/gays. They are also found in Berlin but are on a much more modest scale. You’ll need to check the internet for the information on them. Is it a good idea to have separate memorials for each group or should there have been just one for all affected groups?
I strongly believe that memorials for distinct groups of people should be erected uniquely and separately since these are commemorations of the challenges experienced by those who died or suffered death for a defined cause. The Holocaust Memorial is therefore symbolic of the murdered Jews that is why it was aptly named “Memorial for the Murdered Jews of Europe” (Michael Blackwood Productions, Inc., n.d., par. 2).
2- Do you think the “Ort” (underground place of information) was a good idea? Why, why not?
I think that the ‘ort’ was a good idea to provide visitors and guests with the crucial information relating to the museum. This is necessary especially for people in future generations who could not have been appropriately informed of the historical events that transpired during this time.
3- Officially, the memorial is for the “murdered Jews of Europe”. Technically, wouldn’t that exclude concentration camps Jews who died of old age or disease? What would be a better title?
I still believe that the title is the most appropriate one given that even those who died of old age or disease in concentration camps also fall within this category; since they would not have been forced to be in these camps in the first place if the intention were not to murder them. Their dying of old age or of disease were just a matter of consequence.
4- Why do we have a Holocaust Museum in Washington, D.C. but no national monument for the victims of slavery and genocide in this country (US)?
I think that having a Holocaust Museum in Washington, D.C. is also a symbolic
affirmation that people of the United States detest what had happened during the holocaust. Likewise, there is a need to commemorate the Jews who died and might have relatives who died during this time to manifest unity in remembering them. No national monument for the victims of slavery and genocide were erected in this country because it would not befit to show to the world that these discriminatory events and violations of human rights were actually perpetuated by people from this country.
5- What do you make of Emmaly Reed, the self-proclaimed Dachau Holocaust survivor?
From the documentary video of Emmaly Reed, the viewers are given the prerogative to either believe what she is narrating or to dismiss this as virtually unsubstantiated (Cantrell, n.d. ). One could believe her given that there were other victims who relayed similar incidences and stories of harm that were apparently inflicted. On the contrary, given that she must have been two or three years old at that time, the events could not have been possibly remembered. Likewise, with the narration that she could have been subjected to various torture (hammering of nail on her skull or hanging and poisoning), given her age, it was really a miracle that she survived.
References
Cantrell, K. (n.d. ). Emmaly Reed, Holocaust Survivor. Retrieved from YouTube: https://www.youtube.com/watch?v=KXwRcsVO5TY
Michael Blackwood Productions, Inc. (n.d.). Peter Eisenman. Retrieved from michaelblackwoodproductions.com: http://www.michaelblackwoodproductions.com/archm_eisenman2.php Read More
Share:
Tags
Cite this document
(“Reaction essay Assignment Example | Topics and Well Written Essays - 250 words”, n.d.)
Reaction essay Assignment Example | Topics and Well Written Essays - 250 words. Retrieved from https://studentshare.org/history/1633159-reaction-essay

CHECK THESE SAMPLES OF Holocaust Survivor

...20 May What We Talk About When We Talk About Love Analysis Paper A reign of terror took over the entire world in the mid 1900s when Adolf Hitler, the man that ruled and killed with an iron fist, took over in the form of dictatorship. He began as a young politician with dreams and ambition for his country; to help it succeed and see daylight in the form of growth and development. However, his ideals were not in tandem with others that shared the same land space as him; he was not tolerant towards ethnicity other than being German; he was responsible for the Holocaust or the genocide of the Jews; and has been come to be feared by many across the world. Adolf Hitler’s role in the Holocaust thus was of...
4 Pages(1000 words)Literature review

...? Elie Wiesel is the Nobel Peace Prize winner of 1986. His book en d “Night”, originally en d “Un di Velt Hot Geshvign” was published in 1956. The book was recently translated into French by Elie's wife, Marion Wiesel, in 2006. However, the English translation of the book has been released way back in 1960, translated by Stella Rodway. The novel is reminiscent of the experiences of the author after surviving and enduring torture during the holocaust. The author narrated his story of being at the Auschwitz and Buchenwald concentration camps with his father. Elie was the sole survivor of those camps and surprisingly enough, his narrations claim that even his father was able to survive an entire year of...
5 Pages(1250 words)Dissertation

...Holocaust Introduction Since the Nazis considered that the Jews were inferior to the Germans and likewise, regarded them as a threatening reality to the German racial community, the state sponsored such bureaucratic systematic murder all over their dominated territory during the World War II. This very disturbing historical incident was known as the Holocaust. Before the Holocaust, there were about nine million Jews in Europe, however approximately two – thirds of them were massacred by Adolf Hitler together with the Nazi regime. 1 With the given support of the state, there were different laws implemented in order to eliminate the Jews in which the Nuremberg Laws as introduced by Hitler...
3 Pages(750 words)Essay

The Story of Blima: a Holocaust Survivor

...﻿The Story of Blima: a Holocaust Survivor Famous Greek philosopher Aristotle, in his Poetics, declares a refined piece of literature as the mirror of society, as it reflects the social norms, cultural values, economic conditions and political situation of the society. As a result, the great literary pieces are the record of historical traditions and cultural conventions and show class conflict, ethno-racial unfairness, religious bias and political differences present in society. The same is applied to the Story of Blima: a Holocaust Survivor (2005) by the modern US feminist writer Shirley Russak Wachtel, which focuses upon the ethno-racial hatred applied by the Nazi...
4 Pages(1000 words)Essay

... With respect to the documentary in question, as well as the chapter by Peter Suedfeld, it must be understood that the time period in question wasconcentric around the period between the Nazi takeover of Germany and the end of World War II. Such a time period was necessary as it helped to capture many of the nuances for why such hatred, animosity, and deep seated racial policies were able to come to fruition. However, it must also be understood that in order to understand why the holocaust took place, focusing solely upon the Nazi period of German or European history is not sufficient. As such, deep undercurrents of anti-Semitism and racial hatred for the Jewish population of Europe had existed since the Middle Ages. Much... of this was...
5 Pages(1250 words)Essay

... of impetus for rebellion and resistance, but objectively, there wasn’t much infrastructure, support, or really opportunity. REFERENCE Leventhal, Robert S (2008). The Nazi Genocide of the Jews, 1933-45: A Brief Introduction to the Holocaust. http://www.iath.virginia.edu/holocaust/basichist.html. Powell, L (1999). The Holocaust and History: Introduction to the Survivors Stories. http://www.holocaustsurvivors.org. Spiegelman, A. (2003). The Complete Maus. New York: Penguin The Nazi Holocaust—Genocide in the 20th Century (2008). http://www.historyplace.com/worldhistory/genocide/holocaust.htm... HOLOCAUST After the commencement of extermination of the Jews by the Nazis, there were many responses to Nazi...
2 Pages(500 words)Essay

...The Holocaust The horrendous actions of the Third Reich during WWII are well documented. The result ofthe Nazi’s immoral ideologies included occupying much of Europe and the ‘final solution,’ the murder of more than six million Jews (Dawidowicz, 1986: 3). Throughout the history of the world, many countries have conquered others for a variety of motives while oppressing its citizens but what was the motive for systematically exterminating a particular race of people? How could such a passionate hatred of Jews spread through an entire national conscience causing such horrific acts to be perpetrated? Despite popular opinion, the Holocaust didn’t occur because the German people fell into a hypnotic trance...
6 Pages(1500 words)Essay

...Your Survivor and Sociology Survivor is a TV show that was originally created by Charlie Parsons in Sweden. It is the most popular reality show in the US, and is hosted by Jeff Probst, who is also the show’s executive producer. It first aired in May 31, 2000 on CBS. The show focuses on two teams being marooned on a hostile environment. The most common setting is a tropical island but the Australian outback has been used. The team is composed by average Americans who are not exactly adapted to the new environment. It simulates the idea of being accidentally marooned, as in Cast Away or Lord of the Flies. The teams are then given challenges to be carried out. The TV show’s tagline, Outwit, Outplay,...
5 Pages(1250 words)Essay

...The Holocaust happened for various reasons. Anti-Semitism in Europe helped facilitate a scapegoat for the Versailles Treaty and the economic depression in Germany. Hitler used propaganda to make all the Jews the root of all problems. As a result, Hitler could justify war and territorial gains. The German people readily accepted the necessity to exterminate an enemy. Propaganda allowed the Holocaust to continue. The war also allowed the Holocaust to go on for so long. Since the Diaspora, or scattering of the Jews from current day Israel, Europeans viewed them with distrust. Most of Western Europe and Russia were Christian states during the Middle Ages and after. Those states that were not...
2 Pages(500 words)Essay

...Irving Roth - Holocaust Survivor Testimony The talk by Irwin Roth is an account of his experience from childhood of how the Jews started being discriminated against by the Germans just before the holocaust (which he survived). In his talk, he explains the step by step changes experienced by the Jews from being just like other “normal” people and living “normal” lives to their segregation and massive deaths. These changes started with the conversion of Czechoslovakia to Slovakia after being taken up by Germany and becoming part of Eastern Germany The Jews were segregated from the recreational areas, the schools and other facilities like in hospitals and law firms which they had...
2 Pages(500 words)Movie Review
sponsored ads
Save Your Time for More Important Things
Let us write or edit the assignment on your topic "Holocaust Survivor" with a personal 20% discount.
GRAB THE BEST PAPER

Let us find you another Assignment on topic Holocaust Survivor for FREE!