Comments (0)
Add to wishlistDelete from wishlist
Cite this document
Summary
This is a region that is mostly dominated by Armenian, but it is located inside Azerbaijani. Skirmishes between the two conflicting parties are frequent phenomena…
Download full paperFile format: .doc, available for editing
HIDE THIS PAPERGRAB THE BEST PAPER92.3% of users find it useful 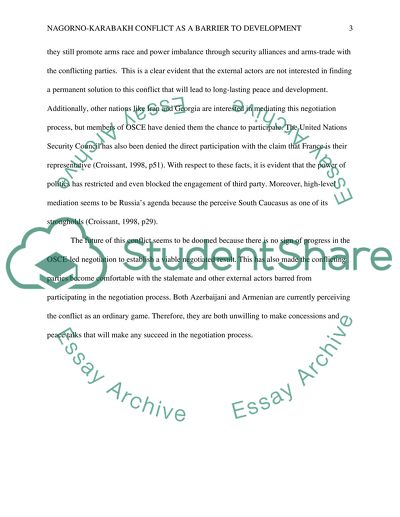 Unresolved Conflict between Armenian and Azerbaijani as an Obstacle to Development It is about twenty-six years since conflict broke out between Armenian and Azerbaijani over Nagorno-Karabakh (NK). This is a region that is mostly dominated by Armenian, but it is located inside Azerbaijani. Skirmishes between the two conflicting parties are frequent phenomena with over thousands of ceasefire violations reported every month and dozens of injuries and death occur every year (Notholt, 2008, p67). The Organization for Security and Co-Operation in Europe (OSCE) Minsk Group is the key international body that is assigned with the duty of bringing peace in this region. It is co-chaired by the United States, France and Russia. Negotiations hit a deadlock in 2011 leading to spread of the geographical scope to other regions far way from Nagorno-Karabakh. It has been identified that this conflict is the key barrier to peace, stability and development in the South Caucasus (Notholt, 2008, p68).
A review of the reasons as to why both the external actors and the conflicting parties have an interest in maintaining the status quo reveals the reason why the peace negotiation process has currently hit a deadlock. For example, both the government of Armenian and Azerbaijani have not shown any genuine interest in achieving the negotiated outcomes, which are proposed by OSCE (Notholt, 2008, p34). The Nagorno-Karabakh government was officially excluded from participating in this peace process, and the Armenia government is currently representing them. NK officials are currently becoming impatient with isolation from the direct participation and the fact that the negotiation process is currently not underway (Croissant, 1998, p42).
A number of factors do not favor the negotiation process in this region. For instance, the geographical context does not support this negotiation progress. This is because the key powerbrokers, which include The United States, Russia and Turkey, seem to be comfortable with the current status quo with respect to their strategic interests (Croissant, 1998, p34). In addition, they still promote arms race and power imbalance through security alliances and arms-trade with the conflicting parties. This is a clear evident that the external actors are not interested in finding a permanent solution to this conflict that will lead to long-lasting peace and development. Additionally, other nations like Iran and Georgia are interested in mediating this negotiation process, but members of OSCE have denied them the chance to participate. The United Nations Security Council has also been denied the direct participation with the claim that France is their representative (Croissant, 1998, p51). With respect to these facts, it is evident that the power of politics has restricted and even blocked the engagement of third party. Moreover, high-level mediation seems to be Russia’s agenda because the perceive South Caucasus as one of its strongholds (Croissant, 1998, p29).
The future of this conflict seems to be doomed because there is no sign of progress in the OSCE-led negotiation to establish a viable negotiated result. This has also made the conflicting parties become comfortable with the stalemate and other external actors barred from participating in the negotiation process. Both Azerbaijani and Armenian are currently perceiving the conflict as an ordinary game. Therefore, they are both unwilling to make concessions and peace talks that will make any succeed in the negotiation process.
Bibliography
Top of Form
Croissant, M. P. (1998). The Armenia-Azerbaijan conflict: causes and implications. Westport, Conn [u.a.], Praeger.
Bottom of Form
Top of Form
Notholt, S. (2008). Fields of fire: an atlas of ethnic conflict. London, Notholt Communications.
Bottom of Form Read More
Share:
Tags
Cite this document
(“Unresolved conflicts in the region as a key obstacle in the Essay”, n.d.)
Unresolved conflicts in the region as a key obstacle in the Essay. Retrieved from https://studentshare.org/history/1633067-unresolved-conflicts-in-the-region-as-a-key-obstacle-in-the-development-of-the-armenian-azerbaijani-nagorno-karabakh-conflict-in-the-context

“Unresolved Conflicts in the Region As a Key Obstacle in the Essay”, n.d. https://studentshare.org/history/1633067-unresolved-conflicts-in-the-region-as-a-key-obstacle-in-the-development-of-the-armenian-azerbaijani-nagorno-karabakh-conflict-in-the-context.
Comments (0)
Click to create a comment or rate a document

...between the South Caucasian nations of Azerbajian and Armenia. Throughout the conflict there have been thousands of deaths and even more refugees. A portion of over 14 percent of the area has been occupied by the Armenian forces after evicting all the Azeri population. The conflict is considered as internal or non-international conflict. Any attempt by international organisation to bring peace in the region has been desultory and unmotivated. The conflict is due to the demand of independence by the Armenian population in the Nargorno-Karabakh territory. Other than the Republic of Azerbajian and the...
10 Pages(2500 words)Essay

...?THE ARMENIAN GENOCIDE The Armenian Genocide took place in the period before and after the First World War. It began around April 1915. It was planned and executed by the Ottoman government of theOttoman Empire. It was a systematic massacre of the Armenian population of the Empire. This continued until the fall of the Ottoman Empire. It was replaced by the Republic of Turkey. This was in 1923. The killing took place with varying degrees of intense. Before the start of the genocide, the Armenian population was around two million in the Ottoman state. However, in around 1918, there were only about one million Armenians left. Of these, hundreds of thousands had been rendered homeless. They were merely refugees in the state.Come 1923... ; the...
10 Pages(2500 words)Research Paper

...?Resolution of Conflict between Armenia and Azerbaijan about the region called Nagorno Karabakh Although the bloodiest of fighting got over in 1993, the struggle over the territory of Nagorno-Karabakh still remains unresolved. The problem is simple, both Armenians and Azeris assert that they are absolute and rightful owner of the region (no questions asked). The conflict area is located within the boundaries of Azerbaijan but mainly Armenians live there. The latest blaze of this age-old clash appeared on world’s timeline at the very end of the Soviet era,...
4 Pages(1000 words)Essay

...? Resolution of Conflict between Armenia and Azerbaijan about the region called Nagorno Karabakh When the former Soviet Union collapsed and was divided into a number of states many issues emerged among the newly born states, some of the issues were over borders, land sizes or in many cases they were on the resources that existed. One of the famous disputes was among the people of Armenia and Azerbaijan; they both were fighting on the issue of a small piece of land known as Nagorno Karabakh. The place is located closer to Azerbaijan, but it has a majority population of Armenians. In the pre soviet era, this was a place for Armenians, but later during the Soviet Era this place was considered as a part of Azerbaijan. There has been... no...
4 Pages(1000 words)Essay

...? Resolution of Conflict between Armenia and Azerbaijan about the region called Nagorno Karabakh Introduction The conflict between the Armenian and the Azerbaijan states over Nagorno-Karabakh originates from the collapse of the Soviet Union which gave rise to several independent states. During the reign of the Soviet Union, the Nagorno-Karabakh region had become an integral with the Azerbaijan state1. There was a territorial disagreement over the region in 1920s when the Ottoman plus British policies integrated Karabakh with Azerbaijan. The Armenians failed to accept the motion of policies to connect the two regions. The integration between Karabakh and Azerbaijan did not last since, in the late 1980s the Armenian state commenced... to...
4 Pages(1000 words)Essay

...The Armenian Diaspora: An Inside Perspective The Armenians are a hardy ethnic group who trace their roots to the mountain barrier region of the Caucasus and the adjoining Armenian highlands. A significant portion of them have remained in that area, specially in Armenia. However, a large allocation of Armenians are also distributed around the world, hence the relevance of the Armenian diaspora. According to Minahan (1998), “the Armenians have a significant presence in countries such as Georgia, Iran, Russia, and Ukraine primarily because of their proximity to Armenia” (p.3) .In the trying years in the aftermath of the Armenian Genocide, a disproportionate number of survivors migrated to different parts of the world. These include... the...
2 Pages(500 words)Research Proposal

Compare and contrast Russo-Chechen wars to Nagorno-Karabakh conflict. Discuss with special reference to theories of conflict

...Compare and contrast Russo-Chechen wars to Nagorno-Karabakh conflict. Discuss with special reference to theories of conflict The Nagorno-Karabak region was created by the Soviet Union within Azerbaijan in 1924 with more than 94 percent Armenian population. With the increase in the Azerbaijani population, the Karabakh Armenians were annoyed by the discriminatory rule that paved way for hostilities between the two populations in the area. In February 1988, members of the National Council of Nagorno-Karabakh constituting...
5 Pages(1250 words)Essay

However, a negotiation will likely produce a win-win solution if the negotiator is able to build rapport and establish a trusting relationship between the parties in conflict. This requires creative communication and creative venues. For example, it may require a neutral forum that is more reliable, less formal, and less hostile. An informal setting, yet reliable, can help the participants to feel more comfortable to communicate directly and openly to each other. Besides creative communication, it also requires creative agenda. When there is a deadlock during communication, it requires the negotiator to break down the main issue into several different parts and align them into a sequence of negotiator that will allow the flexible...
4 Pages(1000 words)Book Report/Review

...Armenian Genocide Lecturer: A huge population of Armenia children succumbed to harsh hardships in the Armenian genocide because the Ottoman Empire ordered slaughter of all Armenian above the age of five years. Some of the children during the genocide were burnt alive while others were drowned or even poisoned; moreover, others died from the lack of food as others succumbed to diseases. Owing to the Armenian Genocide, thousands of Armenian children became orphans propelling others to convert to Islam in order to survive. Extensive operations carried out to burn children at a large scale occurred in Bitlis province were many Armenian women as well as children were burnt alive. Moreover, mass burning of children took place in Der Zor... as...
2 Pages(500 words)Essay

Evaluation of an Argument

4 Pages(1000 words)Essay
sponsored ads
Save Your Time for More Important Things
Let us write or edit the essay on your topic "Unresolved conflicts in the region as a key obstacle in the development of (the Armenian-Azerbaijani Nagorno-Karabakh conflict in the context)" with a personal 20% discount.
GRAB THE BEST PAPER

Let us find you another Essay on topic Unresolved conflicts in the region as a key obstacle in the development of (the Armenian-Azerbaijani Nagorno-Karabakh conflict in the context) for FREE!