Comments (0)
Add to wishlistDelete from wishlist
Cite this document
Summary
Perhaps the most exciting events of the 20th century that profoundly mapped out a new course in the history of human kind, the stunning demise of the seventy year old Soviet regime in 1991 was completely unanticipated; a surprise to many, including the system’s internal…
Download full paperFile format: .doc, available for editing
HIDE THIS PAPERGRAB THE BEST PAPER93.4% of users find it useful 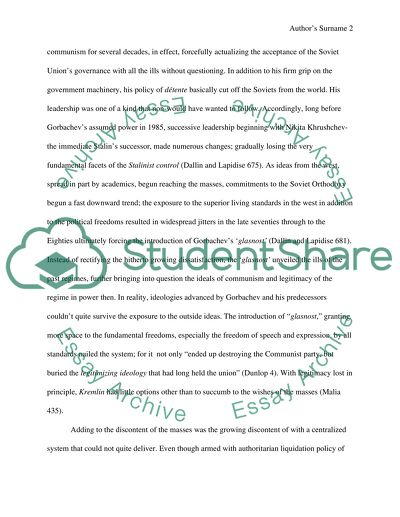 Due The Major Reasons for the Collapse of the Soviet Union Perhaps the most exciting events of the 20th century that profoundly mapped out a new course in the history of human kind, the stunning demise of the seventy year old Soviet regime in 1991 was completely unanticipated; a surprise to many, including the system’s internal dissidents and/or future revolutionaries themselves. A debate with a rare magnitude that has dragged on for two decades, the very fragmentation of the union knows not unanimity, with scholars divided right in the middle over the bullets that actually precipitated the unfortunate event. As illustrated below, the factors that led to the collapse of the Soviet Union were both internally and externally instigated.
To begin with, the collapse of the Soviet Union was much a consequential effect of poor managerial aspects of the political system inexistence. Established in 1922 under Vladimir Lenin, Soviet Union was built on terror upon the larger citizenry, orchestrated by the Communist Party of the Soviet Union (CPSU) machinery engineered by Joseph Stalin, the party’s first General Secretary. Intolerant to any form of criticism, Stalin basically murdered millions opposed to his authoritarian nature of leadership; a style of leadership that would set the tone of communism for several decades, in effect, forcefully actualizing the acceptance of the Soviet Union’s governance with all the ills without questioning. In addition to his firm grip on the government machinery, his policy of détente basically cut off the Soviets from the world. His leadership was one of a kind that non-would have wanted to follow. Accordingly, long before Gorbachev’s assumed power in 1985, successive leadership beginning with Nikita Khrushchev-the immediate Stalin’s successor, made numerous changes; gradually losing the very fundamental facets of the Stalinist control (Dallin and Lapidise 675). As ideas from the west, spread in part by academics, begun reaching the masses, commitments to the Soviet Orthodoxy begun a fast downward trend; the exposure to the superior living standards in the west in addition to the political freedoms resulted in widespread jitters in the late seventies through to the Eighties ultimately forcing the introduction of Gorbachev’s ‘glasnost’ (Dallin and Lapidise 681). Instead of rectifying the hitherto growing dissatisfaction, the ‘glasnost’ unveiled the ills of the past regimes, further bringing into question the ideals of communism and legitimacy of the regime in power then. In reality, ideologies advanced by Gorbachev and his predecessors couldn’t quite survive the exposure to the outside ideas. The introduction of “glasnost,” granting more space to the fundamental freedoms, especially the freedom of speech and expression, by all standards nailed the system; for it not only “ended up destroying the Communist party, but buried the legitimizing ideology that had long held the union” (Dunlop 4). With legitimacy lost in principle, Kremlin had little options other than to succumb to the wishes of the masses (Malia 435).
Adding to the discontent of the masses was the growing discontent of with a centralized system that could not quite deliver. Even though armed with authoritarian liquidation policy of all private property ownership and commerce, the “social contract” – supposedly with inbuilt guaranteed services and employment was terribly failing. As Colton notes:
“The buying habits of citizenry demanded more and better goods than in the past, and that while demands of people had significantly grown, the industry trailed along much behind them” (49).
The Union had grown too large in size to the extent that it became practically impossible for the state planners to respond effectively to the complex interests down to the local level. As a result, economic planning lost touch with reality, with managers, which were majorly party sympathizers, fudging figures to show that goals were being met.
Besides the long term internal structural weaknesses that had bombarded the Soviet system left right and center, the costly influence of the Strategic Defense Initiative (SDI) conventionally founded on high technology; the Soviets’ Afghanistan intervention, straining the vulnerable fiscal situation that was already swimming under the effects of high international oil prices; and the nationalism exhibited by the disgruntled minorities generally converged to wipe the union out of existence (Schweizer 4). The military build-up during the Reagan presidency, in particular, squeezed the Soviet’s already dwindling resources into unnecessary competition.
The reasons for the disintegration of the Soviet Union were very old in the making, and that the immediate ones only added fodder towards a deterministic end. With leadership that lacked foresight to diagnose a ‘building storm’ under their very own eyes, the breakup couldn’t have been much harder to envisage; for the system was buttressed with lies in all fronts.
Work cited
Colton, Timothy. Dilemma of Reform in the Soviet Union. New York: Council on
Foreign Relations, 1986. Print.
Dallin, Alexander and Gail Lapidise. The Soviet System, From Crisis to Collapse.
Boulder: Westview Press, 1995. Print.
Dunlop, John. The Rise of Russia and Fall of the Soviet Empire. Princeton: Princeton
University Press, 1993. Print.
Malia, Martin. The Soviet Tragedy: A History of Socialism in Russia, 1917-1991. New
York: Free Press, 1994. Print.
Schweizer, Peter. “Who Broke the Evil Empire?” National Review 46.10 (1994): 46-49. Print. Read More
Share:
Tags
Cite this document
(“What were the major reasons for the collapse of the Soviet Union in Essay”, n.d.)
What were the major reasons for the collapse of the Soviet Union in Essay. Retrieved from https://studentshare.org/history/1630585-what-were-the-major-reasons-for-the-collapse-of-the-soviet-union-in-1991

“What Were the Major Reasons for the Collapse of the Soviet Union in Essay”, n.d. https://studentshare.org/history/1630585-what-were-the-major-reasons-for-the-collapse-of-the-soviet-union-in-1991.
Comments (0)
Click to create a comment or rate a document

Collaspe of the Soviet Union

...?How and why did the collapse of the Soviet Union change the meaning of the West? The collapse of the Soviet Union represented the largest coupe of the western hemisphere, specifically the United States which had engaged in a “cold war” with this nation for close to 50 years. In understanding how the collapse affected the west it is important to understand what the collapse entailed. Until 1991 there had been two major superpowers battling for supremacy, this occurred in many areas; space travel, economics and the aggregation of various cultures and countries. This was...
2 Pages(500 words)Essay

Why did the Soviet Union collapse

...of communism in accordance to the theories laid down by Karl Marx. The Communist party was leading the government offices in Soviet Union and the leaders in the party were following a level known as ‘nomenklatura’ which helped them to access the resources of the state as they wished to (McCauley 2001 p. 86). A variety of factors led to the fall of the Communist State which have formed a debate amongst the historians. Many believe the sole factor of Afghanistan was enough to collapse the Soviet Union whereas opponents argue that a lot of other factors came into play along with the Afghanistan war which led to the collapse...
5 Pages(1250 words)Essay

...was a global super power with less socio-economic and political problems. Aron (2011) opines that “Certainly, there were plenty of structural reasons -- economic, political, social -- why the Soviet Union should have collapsed as it did, yet they fail to explain fully how it happened when it happened ” (p.2). The popular assumptions on the collapse of the Soviet Union were based upon misunderstandings and the questions on the collapse are still answerless to an extent. If America is not behind the rapid collapse of Soviet...
3 Pages(750 words)Essay

...? Post Soviet Union Literature Russia has experienced a quick change in the style and form of literatures by the national authors after the decision to promote glasnost or allowing free discussion in both speech and transition of culture was allowed. It is worth noting that even despite lifting the censorship, the book market was highly affected by economic and political chaos leading into several book printing industry falling and eventually reducing the number of printed books. Nevertheless, detective stories and thrillers have turned out to be very successful in the 1990s and a decade later, Boris Akunin’s 19th century sleuth became very popular. Boris Akunin is a prominent Russian author of suspense...
7 Pages(1750 words)Essay

End of Cold War and Collapse of Soviet Union

...to which Gorbachev can be held responsible for the subsequent collapse of communism. Though the reasons for the collapse of communism in the CEE countries are numerous, Gorbachev is at the heart of the said event. Historians have examined the dramatic end of the Cold War almost since the day the Berlin Wall came crashing down. Some, most notably Karen Dawisha, predicted the event earlier. She released her book Eastern Europe, Gorbachev, and Reform in 1988, and understood that Gorbachev knew the regimes in Eastern Europe were illegitimate, placed in power by the Soviet Union on the coattails of the Red Army's entrance into the area...
8 Pages(2000 words)Essay

The Collapse of the Soviet Union

...the Soviet Unions legitimacy, internationally and domestically. On March 30, 1990, the Estonian supreme council declared Soviet power in Estonia since 1940 to have been illegal, and started a process to reestablish Estonia as an independent state. On March 17, 1991, in an all-Union referendum 78% of all voters voted for the retention of the Soviet Union in a reformed form. The Baltic States, Armenia, Georgia and Moldova boycotted the referendum. In each of the other 9 republics, a majority of the voters supported the retention of the Soviet Union. In June...
8 Pages(2000 words)Essay

Collapse of the Soviet Union

...in the world. The Soviet Union utterly rejected the cultures and values of the west as they were in full control of their lives and it was not until the collapse of the republic that the individual countries that constituted the old republic begin to accept some norms and values of the west. The Soviet Union also were also advanced in the art of warfare and they were technologically advanced during that period and it was only very few countries that could match up with its strength. Like any other collapse before or after it, there were different...
10 Pages(2500 words)Term Paper

Democratization in Russia after the collapse of Soviet Union

...Democratization in Russia after the collapse of Soviet Union Democratization in Russia after the collapse of Soviet Union In the current world, many countries are trying to change from authoritarian rule to democratic governance. One of such countries is Russia. However, the country has some hindering factors. It has an intertwined character of economics, politics and ideology that contributes to the difficulty felt by the country in economic reforms and democratization. It also has a strong state control that affects the transitional process and affects present developments. Another factor that may have contributed to the difficulties experienced in transition was the approach taken in initiation of the transition process. Russia... that...
4 Pages(1000 words)Essay
sponsored ads
Save Your Time for More Important Things
Let us write or edit the essay on your topic "What were the major reasons for the collapse of the Soviet Union in 1991" with a personal 20% discount.
GRAB THE BEST PAPER

Let us find you another Essay on topic What were the major reasons for the collapse of the Soviet Union in 1991 for FREE!