Comments (0)
Add to wishlistDelete from wishlist
Cite this document
Summary
The paper describes Napoleon as a French general who becomes the leader of France and eventually emperor of the French. At a younger age, he attends a military school and later graduated as a lieutenant in the artillery. He is a witty individual who sees France through the French revolution…
Download full paperFile format: .doc, available for editing
HIDE THIS PAPERGRAB THE BEST PAPER98% of users find it useful 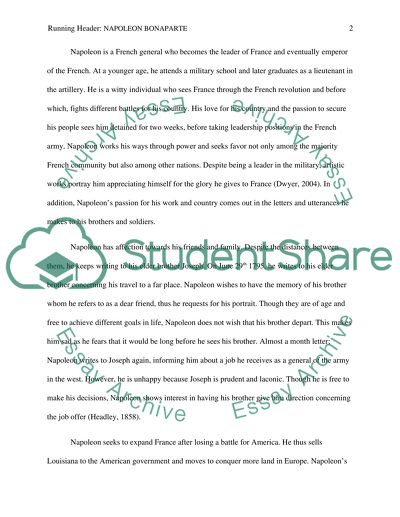 Extract of sample "Napoleon as an Irreplaceable Leader in French History"

Napoleon Bonaparte Task Napoleon is a French general who becomes the leader of France and eventually emperor of the French. At ayounger age, he attends a military school and later graduates as a lieutenant in the artillery. He is a witty individual who sees France through the French revolution and before which, fights different battles for his country. His love for his country and the passion to secure his people sees him detained for two weeks, before taking leadership positions in the French army. Napoleon works his ways through power and seeks favor not only among the majority French community but also among other nations. Despite being a leader in the military, artistic works portray him appreciating himself for the glory he gives to France (Dwyer, 2004). In addition, Napoleon’s passion for his work and country comes out in the letters and utterances he makes to his brothers and soldiers.
Napoleon has affection towards his friends and family. Despite the distances between them, he keeps writing to his elder brother Joseph. On June 29th 1795, he writes to his elder brother concerning his travel to a far place. Napoleon wishes to have the memory of his brother whom he refers to as a dear friend, thus he requests for his portrait. Though they are of age and free to achieve different goals in life, Napoleon does not wish that his brother depart. This makes him sad as he fears that it would be long before he sees his brother. Almost a month letter; Napoleon writes to Joseph again, informing him about a job he receives as a general of the army in the west. However, he is unhappy because Joseph is prudent and laconic. Though he is free to make his decisions, Napoleon shows interest in having his brother give him direction concerning the job offer (Headley, 1858).
Napoleon seeks to expand France after losing a battle for America. He thus sells Louisiana to the American government and moves to conquer more land in Europe. Napoleon’s determination to make France the world’s most powerful nation is clear, as he shows no fear of the third coalition. This coalition comprised of Britain, Russia, Austria and Sweden whom he defeats with help from Rhine, Italy and Holland. Napoleon expresses his happiness for his soldiers; he congratulates them for winning the battle against Austria and again doing the same to Britain. He is proud of his country and wishes to forge good relations between France and other countries. Thus, he says that France will be proud to have her partners help fight war another time (The French Revolution and Napoleon, n.d)
In addition, Napoleon not only looks into increasing the territory of France, but also ensuring that the country’s economy remains stable. He does not give England a chance to have control over France’s territories, thus he writes to the minister of foreign affairs. On 6th January 1810, he complains of his affaires not progressing and states that his investments in Holland are not advancing. This shows a man determined in economic progress, just as he is in the battle field. As much as he wins battles and gains more territories for his country, Napoleon is a generous giver as he allows his younger brother Jerome to take money that remains from his dispositions (Bonaparte, 2010)
Moreover, Napoleon fights hard for his nation. He believes in France despite being an Italian, this he shows in his quotes which not only inspire other people but are his deeds. Napoleon believes that a soldier must fight hard and long for a bit of a colored ribbon. For sure his journey though the French revolution is not easy. As much as he wins many battles, Napoleon’s losses do not discourage his efforts. He seeks every opportunity possible and makes use of it through his army (Keudell, 2012).
In conclusion, the world celebrates napoleon for his efforts to secure territories as well as glory for France. His passion for family and himself equally extends to his colleagues and employees whom he appreciates. He is a graceful giver thus his determination to give France the best of his efforts from a younger age. He for sure is an irreplaceable leader in the French history.
References
Bonaparte, N (2010). A Selection from the Letters and Despatches of the First Napoleon: with explanatory notes. New York: Cambridge university press.
Dwyer, G. P (2004).Napoleon Bonaparte as Hero and Saviour: image, rhetoric and behavior in the construction of a legend 18(4), pp. 379–403. Retrieved from http://fh.oxfordjournals.org/content/18/4/379.full.pdf
Headly, C. P (1858).The Life of Napoleon Bonaparte. New York: Derby & Jackson.
Keudell, F. (2012).The Internet: the book of revelations volume 3.
The French Revolution and Napoleon, 1789-1815. Retrieved from http://www.ltisdschools.org/cms/lib/TX21000349/Centricity/Domain/287/Chapter_23.pdf
. Read More
Share:
Tags
Cite this document
(“SHORT PRIMARY SOURCE ESSAY Assignment Example | Topics and Well Written Essays - 500 words”, n.d.)
SHORT PRIMARY SOURCE ESSAY Assignment Example | Topics and Well Written Essays - 500 words. Retrieved from https://studentshare.org/history/1629635-short-primary-source-essay

...and the country's terrible weather (this was also discovered more than a hundred years later by Hitler at Stalingrad). The Russians avoided Napoleon's forces and lured him and his soldiers deeper into the heartland where winter came, decimating the French forces (Spielvogel, 417). The Russians practised scorched earth policies on their own territory and the result was that the French had little or nothing to forage. All the livestock and crops were destroyed. Supply lines back then would not have been sophisticated to properly supply Napoleon's massive army. Famously, the French invaded with 400,000 troops but returned with only about a tenth of that...
1 Pages(250 words)Book Report/Review

Napoleon Bonaparte as a Political Leader

... that the women had towards the revolution as an improvement of their legal positions were frustrated by Napoleon (Lyons, 55). Napoleon is also seen to have made a contribution to the political structure of the French government through his introduction of nationalism. History depicts that he is one of the French leaders, who believed in nationalism as a tool that would help him obtain the loyalty of the French people during his reign. It is evident that it is this spirit of nationalism that enhanced the inspiration of the armies of the French government enabling the government to attain a remarkable series of victories. These were of enormous benefit to him as he obtained a chance to rise to power. However, this interfered... with the...
3 Pages(750 words)Essay

...Although France has made great technological and economic progress in the twentieth century, her political influence has been much reduced. Trace this decline from 1900 to the present." The 1900s may very well be called as the period which laid the groundwork for France’s decline in international political stage. This was the era marked with instability that severely weakened the French state. The series of “Republics” which followed the fall of the last French empire were mostly experimental systems. The political instability generated by several transitions was highlighted in the 3rd Republic, which lasted for 70 years until the invasion of France by Germany in 1940. Throughout its...
2 Pages(500 words)Essay

...﻿ French Revolution and NapoleonNapoleon’s claim that he saved the French revolution does not seem to hold due to the many changes he brought to the ideals of the French revolution. Of course he continued some of the policies which were in the spirit of the revolution but these policies were connected with education and civil codes rather than a proper system of government. In fact, it can be shown that the system of government established by Napoleon was a step back towards absolutism rather than a more democratic system. Undoubtedly, Napoleon took over the government of France as a popular ruler but he was also a...
2 Pages(500 words)Essay

... Napoleon Bonaparte: Research Proposal Napoleon’s role in the European history has been considerably influential and therea number of important political contributions associated with the reign of this emperor. For this reason I have chosen Napoleon as the subject of my research essay. I aim to highlight his role and contribution to the European history and France itself that has left a deep impact that continue to persist till present times. To highlight Napoleon’s personality I have selected a number of historical psychological analyses that have been written over time by a number of different scholars. Also to be included are a number of general studies that relate to his reign, along with some selected primary source documents... ...
1 Pages(250 words)Research Proposal

...harbored against his elder brother Joseph at a younger age. Napoleon was said to be a dreamer when he was in school. It is therefore possible that his desire to conquer all of Europe was derived from his desire of portraying himself as great leader4. Napoleon gained a reputation as an intelligent and a determined kid at school. This is in contrary to other leaders like Hitler who have always been compared or equated to Napoleon. He had a good memory and excelled in mathematics. He liked reading history especially about famous war time leaders. He thought that he too could also achieve such feats. The only problem that he faced was the...
7 Pages(1750 words)Essay

...that the new National Assembly was promoting equal rights for all men and wanted to get rid of slavery”. Moreover, I feel the writer could well make use of various videos especially found in YouTube. I have found one quite important and relevant video which is a documentary that was featured in the History Channel. It’s a 90 minute video explaining facts about the French Revolution. The link to the video “The French Revolution” is https://www.youtube.com/watch?v=LEq_lAx3ssE . Also, I found another quite useful video for this essay which is about the leadership of Toussaint Louverture in the Haiti Revolution. The link to this video “Haitian Revolution Toussaint L’Overture” is...
4 Pages(1000 words)Essay

...﻿Napoleon Bonaparte as French LeaderNapoleon Bonaparte is recognized as a French leader due to his numerous military exploits. He was born in 1769 in Corsica (BBC 1). He traces his heritage to France and Italy. He attended a military school in France and later joined the army as an artilleryman. His father died, making him change his residence to Corsica where he joined the anti-France opposition. However, he disagreed with the leader of the resistance and changed his loyalty to France. In as much as Napoleon’s era can be examined based on diverse perspectives, it is necessary to focus on major issues...
2 Pages(500 words)Admission/Application Essay
sponsored ads
Save Your Time for More Important Things
Let us write or edit the case study on your topic "Napoleon as an Irreplaceable Leader in French History" with a personal 20% discount.
GRAB THE BEST PAPER

Let us find you another Case Study on topic Napoleon as an Irreplaceable Leader in French History for FREE!