How the events of the 1660s changed London - Essay Example

Comments (0)
Add to wishlistDelete from wishlist
Cite this document
Summary
England, Ireland and Scotland, the kingdoms were restored in the year 1660 and the event is popular by the name of Restoration in the history of…
Download full paperFile format: .doc, available for editing
HIDE THIS PAPERGRAB THE BEST PAPER96.8% of users find it useful 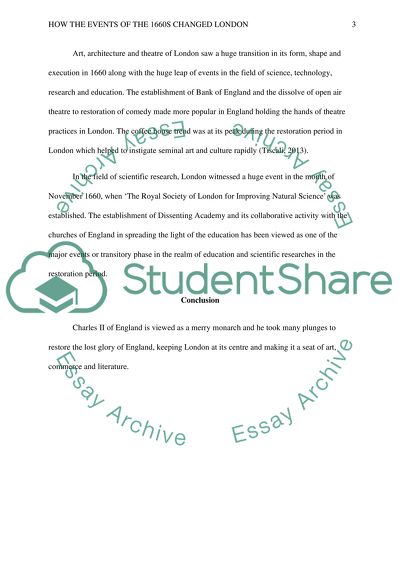 Extract of sample "How the events of the 1660s changed London"

How the Events of the 1660s Changed London Introduction Under the abele reign of Charles II, after the period of Interregnum that was being followed by the battle of three kingdoms i.e. England, Ireland and Scotland, the kingdoms were restored in the year 1660 and the event is popular by the name of Restoration in the history of Europe. The effect of Restoration was far reached; the prominent seat of changes took place in the city of London. The effect of Restoration or the events of 1660 were so evident that it reshaped the city of London from the perspective of its geography to its legislation on one hand and from art and architecture to education and the field of research on the other.
Events of 1660 and its Effect on London
By the end of 1660 things were subtly different within the city of London. London housed about 350, 000 people and it were dwarfing all the other major cities in England. The requirement to extend the city was at its peak. The reign of Charles II witnessed the extension of the city westwards with the inception of parks, squares and personal masterpiece with the title St. James’ which meticulously intrigue with the architecture of Wren inspired designs evolved with a major conflict between tradition and innovation. Contextually, the street plan of London was in a chaotic form still (Robinson, 2011; Monash University, 1997).
The role of Monarchy in restoration of 1660 was crucial and it affected London to a great extent as well. Various laws passed by the Charles II manifested in smooth running of trade and commerce along with civil governance in London followed by its prosperity. The 1660 act of Indemnity and Oblivion enabled the restoration of the lands of Crown and Churches automatically thereby the confiscated land was made available for negotiation and litigation publicly (The Royal Household, 2009).
Art, architecture and theatre of London saw a huge transition in its form, shape and execution in 1660 along with the huge leap of events in the field of science, technology, research and education. The establishment of Bank of England and the dissolve of open air theatre to restoration of comedy made more popular in England holding the hands of theatre practices in London. The coffee house trend was at its peak during the restoration period in London which helped to instigate seminal art and culture rapidly (Tiscali, 2013).
In the field of scientific research, London witnessed a huge event in the month of November 1660, when ‘The Royal Society of London for Improving Natural Science’ was established. The establishment of Dissenting Academy and its collaborative activity with the churches of England in spreading the light of the education has been viewed as one of the major events or transitory phase in the realm of education and scientific researches in the restoration period.
Conclusion
Charles II of England is viewed as a merry monarch and he took many plunges to restore the lost glory of England, keeping London at its centre and making it a seat of art, commerce and literature.
References
Monash University. (1997). The restoration 1660-1700. Retrieved from http://monash.edu/library/collections/exhibitions/restoration/xrstcat.html
Robinson, B. (2011). London: Brighter lights, bigger city. Retrieved from http://www.bbc.co.uk/history/british/civil_war_revolution/brighter_lights_01.shtml
The Royal Household. (2009). Charles II (r.1660 -1685). Retrieved from http://www.royal.gov.uk/historyofthemonarchy/kingsandqueensoftheunitedkingdom/thestuarts/charlesii.aspx
Tiscali. (2013). Tudor and restoration London. Retrieved from http://www.talktalk.co.uk/reference/encyclopaedia/hutchinson/m0098260.html Read More
Share:
Tags
Cite this document
(“How the events of the 1660s changed London Essay”, n.d.)
Retrieved from https://studentshare.org/history/1623858-how-the-events-of-the-1660s-changed-london

“How the Events of the 1660s Changed London Essay”, n.d. https://studentshare.org/history/1623858-how-the-events-of-the-1660s-changed-london.
Comments (0)
Click to create a comment or rate a document

How do events become media events

...?Princess Diana’s car accident was a great news event and her funeral was a great media event. How did her death become great media event is part of the discussion linked with this paper. News from the media is influential as most of them concern the human life. That is why great news events are what broadcasters would want to offer as they are in high demand. However, there are also other human events that are becoming integral parts of daily life which would no longer create remarkable impact or special response. For example, everyday, people would hear crimes and to the extent that violence associated with killing has been remarkably considered a reality of life. When the news report would headline ‘a man kills his wife... probably end up...
5 Pages(1250 words)Essay

...?How civil war changed families. Hundreds of women on both sides in the American Civil War took on male s and appearances, so that they could join the fight for their respective sides. Some saw it as an adventure, but there was also the question of pay and freedom. Why should only men be able to fight for what they believed in? Also of course a soldier earned roughly double what any woman, whatever her profession or trade, could earn at the time. A ‘man’ had freedom which a woman could not enjoy, so some of these women kept up the pretence for the rest of their lives, although the majority were spotted at some early point. Jenny Hodgers was one of the women who believed that there were more opportunities...
5 Pages(1250 words)Assignment

...?Sur Lecturer How WGN changed broadcasting Broadcasting is the business that involves the media to reach a fan base with relevant broadcast material that can be consumed by the listeners or the viewers. In the past, when there were no technological equipment, broadcast stations found it hard to set up systems of broadcast that would reach the requirements of the audience. The WGN came up at around this time to bring about change in the way the broadcasting affairs were conducted. This paper is going to analyze three major changes implemented by WGN so as to basically change the whole of broadcasting platform such as being the first station to air...
5 Pages(1250 words)Research Paper

How to live in London

...? HOW TO LIVE IN LONDON By: Presented (Due Introduction London is known to be one of the most expensive cities in the world, a fact which discourages many people to want to live there. The table below indicates typical prices in London as indicated in Expats Plaza (n.d.). Table 1: Typical Prices of Commodities in London Item Price (approx.)  Average groceries bill (2 people)  ?60 - ?100 per week  Average meal in average restaurant    ?20 - ?40  Underground single ticket (London)  ?4  Zone 1-2 travel card in London  ?86 per month  Zone 1-6 travel card in London   ?41 per week  Rent one bedroom flat...
3 Pages(750 words)Essay

...  English 27th November, How Facebook Changed the World – The Arab Spring The Arab spring is a term given to the Arab revolution, which came due to economic and political dissatisfaction of the people. This revolution resulted in a social crisis and was majorly facilitated by use of social media. People were able to voice their dissatisfaction message across the Arab world. The political leadership of Arab nations was under pressure that was facilitated by this social media agitation. In this aspect, political and social crisis engulfed these nations due to the fact that activists used facebook to enlighten and create awareness among the citizens. This enabled a serious information flow to the population and creating awareness... on their...
5 Pages(1250 words)Essay

Events in Childhood and How They Have Changed

...﻿Comparison between the events in child hood and how it has changed Introduction I have experienced some memorable events that I participated in from the time I was a youngster. I have therefore noted that there are some events that formed part of my culture since childhood until now when I have grown and they have never changed while others have changed. There are several occasions that I experienced as a child and have changed now when I am an adult, among them is during birthday parties. Annually my parents would always do their best on the day of celebrating my birthday to make it...
2 Pages(500 words)Essay

...Events management Introduction The arts are a declaration that the perceptions of the world comprise of more than theoretical concepts and abstract ideas (Nationa (a)l, 2015). The concepts that are highlighted in creative arts enable different persons to understand a particular conceptual idea in the society. The creative arts industry in Belgium has experienced a steady growth because of the country’s rich culture. In addition, the aspects of formal education and technology contribute to the growth of the creative arts industry in Belgium. The report provides an overview of an event to promote the Belgium’s creative products in London (www.dw.com), 2015). The products that feature in...
4 Pages(1000 words)Essay
sponsored ads
Save Your Time for More Important Things
Let us write or edit the essay on your topic "How the events of the 1660s changed London" with a personal 20% discount.
GRAB THE BEST PAPER

Let us find you another Essay on topic How the events of the 1660s changed London for FREE!