Comments (0)
Add to wishlistDelete from wishlist
Cite this document
Summary
To begin with, Dreyer described Edmund Burke as a key philosophical founder of modern conservatism and a representative of classical liberalism who is best known for his steadfast opposition to the French revolution (462-479). Based on his reflections on the French revolution,…
Download full paperFile format: .doc, available for editing
HIDE THIS PAPERGRAB THE BEST PAPER97.6% of users find it useful 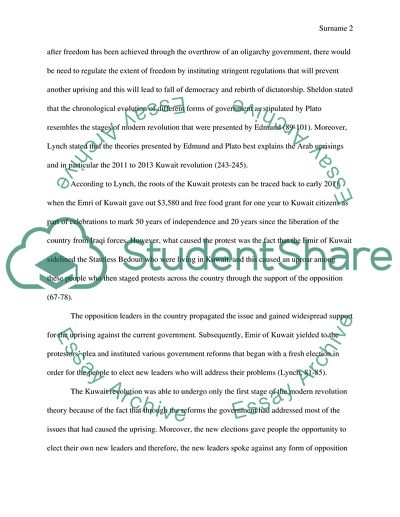 How Kuwait Followed the Stages of Edmund Burke’s Theory of Modern Revolution Introduction To begin with, Dreyer described Edmund Burke as a key philosophical founder of modern conservatism and a representative of classical liberalism who is best known for his steadfast opposition to the French revolution (462-479). Based on his reflections on the French revolution, Edmund Burke developed a theory on stages that modern revolutions follow (Clark, 171-184). The objective of this present study if to validate the Edmund’s theory by showing how Kuwait as a case study has followed through the first stage of the modern revolutions and how it has been able to avoid the other three stages of modern revolution.

How Kuwait follow the stages of Edmund Burke’s Theory of Modern Revolutions
Edmund Burke’s theory of modern revolution relates with the Socratic dialogue known as “The Republic,” which was written by Plato who was a renowned Ancient Greek Philosopher who made significant contributions towards intellectual and historical works of political theory and philosophy. In the Socratic dialogue, Plato argued that there are five forms of government and that there is a consistent metamorphosis that occurs on governments as years goes by.
Plato’s Socratic dialogue substantiates the Edmund’s theory on the fact that Plato argue that a government normally transform to an oligarchy form of government, which is made up of people who love money and therefore corrupt. This form of government normally attracts many critics who then plot to overthrow the government and fight off those who support the government in order to restore democracy within the country (Santas, 45-47). Plato argued that after freedom has been achieved through the overthrow of an oligarchy government, there would be need to regulate the extent of freedom by instituting stringent regulations that will prevent another uprising and this will lead to fall of democracy and rebirth of dictatorship. Sheldon stated that the chronological evolution of different forms of government as stipulated by Plato resembles the stages of modern revolution that were presented by Edmund (89-101). Moreover, Lynch stated that the theories presented by Edmund and Plato best explains the Arab uprisings and in particular the 2011 to 2013 Kuwait revolution (243-245).
According to Lynch, the roots of the Kuwait protests can be traced back to early 2011 when the Emri of Kuwait gave out $3,580 and free food grant for one year to Kuwait citizens as part of celebrations to mark 50 years of independence and 20 years since the liberation of the country from Iraqi forces. However, what caused the protest was the fact that the Emir of Kuwait sidelined the Stateless Bedoun who were living in Kuwait, and this caused an uproar among these people who then staged protests across the country through the support of the opposition (67-78).
The opposition leaders in the country propagated the issue and gained widespread support for the uprising against the current government. Subsequently, Emir of Kuwait yielded to the protestors’ plea and instituted various government reforms that began with a fresh election in order for the people to elect new leaders who will address their problems (Lynch, 81-85).
The Kuwait revolution was able to undergo only the first stage of the modern revolution theory because of the fact that through the reforms the government had addressed most of the issues that had caused the uprising. Moreover, the new elections gave people the opportunity to elect their own new leaders and therefore, the new leaders spoke against any form of opposition that could divide the country. In addition, after the reforms, the government arrested some key opposition leaders in order to weaken the spirit of the opposition (Lynch, 93-95).
Work’s Cited
Clark, Jonathan. Reflections on the Revolution in France. A Critical Edition. California, U.S Stanford University Press. 2001 Print
Dreyer, Fredrick. The Genesis of Burke’s Reflections,’ The Journal of Modern History, Vol. 50, No. 3. 1978 Print
Lynch, Marc. The Arab Uprising: The Unfinished Revolutions of the New Middle East. New York, U.S : Perseus Books Group. 2013
Santas, Gerasimos. Understanding Plato’s Republic. Oxford: Wiley-Blackwell. 2011 Print

...?Amanda and Helen: Family Dynamics as Examined through the Mother Figure in The Glass Menagerie and A Taste of Honey Introduction The role of the mother in both The Glass Menagerie (1944) and A Taste of Honey (1958) is an integral part of the development of the conflict. A Taste of Honey represents a realistic type of playwriting which is done with a multitude of social themes which made it into the forefront of a type of play referred to as “kitchen sink” in which all kinds of themes are put together in one work (Nava 2007). The Glass Menagerie also represents a multitude of themes, although it predates the ‘kitchen sink’ concept and does not share the same number of social themes that are represented in A Taste of...
9 Pages(2250 words)Essay

...? Consumer theory primarily relates to consumer choice, where consumer choice is a microeconomics theory that links the preferences over consumption of goods and services to the expenditure entitled to these and hence, to consumer demand curves. Given the law ‘ceterus paribus’ of economics, a typical consumer demand curve shows, with all other factors constant an individual will consume more of a good or a service when its price falls and lesser of it if the price rises. Consumer choice is a basic way of analyzing how equilibrium between preferences and expenditures can be achieved by consumers by maximizing utility in regard to their budget constraints. Two important terms to understand...
8 Pages(2000 words)Essay

...A Comparison of the Animal Farm and Edmond Burke 4 Stages of Modern Revolutions I. The “Animal Farm” is a story written by George Orwell, the pen name of Eric Blair who writes novels and essays for a living. The said fable takes place in Manor Farm, the usual English farm (Orwell 1-113). It is called a fairy story for it portrays how animals captured the Manor Farm from its drunken incompetent farmer named Mr. Jones and how they changed its name to Animal Farm (Orwell 1-113). The animals here also employ a government that depicts that of human rule wherein they established a model community wherein all animals are equal (Orwell 1-113)....
4 Pages(1000 words)Essay

...in Kuwait. Many immigrants have settled in this region and English is still the most preferred medium of communication. Not only for business purposes, the oil business opened up Kuwait and many people moved to settle in other countries. They needed to learn English so that they could survive when they lived in these countries where Arabic was not understood. Arabic and English have some common characteristics like sounds. Many English words were adopted in languages spoken in Kuwait. Words in Arabic were replaced by English words and they also enriched the Arabic vocabulary. This is mainly because the British spent a long time in Kuwait. Formal, informal, and technical...
3 Pages(750 words)Research Paper

...and revolutionary theorists everywhere, to undergo revolution was to imitate the French.8 The French Revolution displayed the universal "logic of revolution," the stages or phases through which all revolutions must pass, thanks to their intellectuals. There would be a "rule of the moderates" followed by "the rise of the radicals," Girondists followed by Jacobins. Terror would gave way to Thermidor, the point at which the revolution ended its radicalization and tried to achieve a period of stability.9 As in the French case, this would often lead to a military dictatorship that claimed to safeguard the...
11 Pages(2750 words)Essay

...Freud’s Theory Applied Here are some ways Freudian theory can be applied to this boy’s case. Freudian theory talks about the conscious and the unconscious mind. the conscious mind involves everything a person is aware of; while, the unconscious mind involves things that lie outside of awareness, like desires, wishes, past memories, etc. The concept of the unconscious mind can be applied in the given case in a sense that the boy might have experienced bully in his childhood, or he might have seen his father bullying his mother. The bullying he experienced influenced his behavior that he became violent toward others or toward females if he saw his mother getting bullied in the past. It got...
1 Pages(250 words)Essay

...Introduction The different psychological theories, including theories of human development, have emerged as one of the realistic theories that truly explain human growth, especially in mental development (Gawel, 6). Maslow’s hierarchy of needs is a theory of psychological human motivation coined by a psychologist scholar by the name Abraham Maslow, during the periods of early 1940s (Loh, Schapper and Wrathall, 3). In this research paper on psychology, I am going to look at my life, past and present and decide on what stages I have completed and if they were successful or unsuccessful. I will also discuss the impact this may have had in my life, and all...
2 Pages(500 words)Research Paper
sponsored ads
Save Your Time for More Important Things
Let us write or edit the essay on your topic "How does Kuwait follow the stages of Edmund Burke's Theory of Modern Revolutions" with a personal 20% discount.
GRAB THE BEST PAPER

Let us find you another Essay on topic How does Kuwait follow the stages of Edmund Burke's Theory of Modern Revolutions for FREE!