Comments (0)
Add to wishlistDelete from wishlist
Cite this document
Summary
The sea has always played an important role in their history. They are always seafarers seeking opportunities for trade and finding new cities across the Mediterranean sea.(History…
Download full paperFile format: .doc, available for editing
HIDE THIS PAPERGRAB THE BEST PAPER91.1% of users find it useful 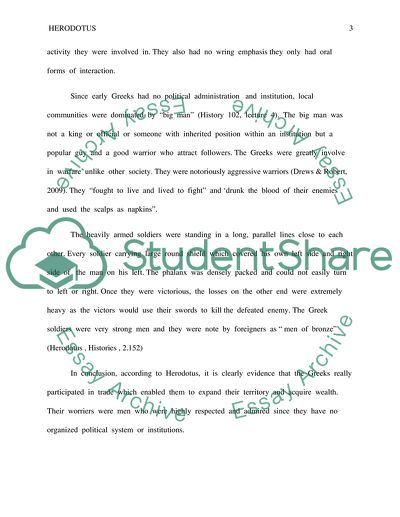 Herodotus Herodotus According to Herodotus, Greeks live in a country surrounded with water. The sea has always played an important role in their history. They are always seafarers seeking opportunities for trade and finding new cities across the Mediterranean sea.(History 101, lecture 4) Their lower population and increased population greatly declined in commercial ties. The Greeks were also involved in warfare’s hence they developed phalanx which signified an organize dense line of battle and their heavily armed infantry soldiers were known as hoplites.
The ancient Greeks were active seafarers seeking opportunity to find new independent cities to trade with at the coast across Mediterranean Sea. These new cities act as their trading station. In these stations Greek goods such as pottery ( 2009.529), bronze, silver, gold vessels olive oil, wine and textiles were exchange for luxury items and toxic raw materials that were in turn worked by Greek craftsmen. They established trading enclaves within existing local communities. The port town of Naukratis (1972.118.142) served as a commercial headquarters for Greek traders in Egypt.
A well established maritime trade routes around the Mediterranean basin enable foreigners to travel to Greece. After the military campaign of Alexandra the great (336_323 B.C.), more extensive trade routes were opened across Asia and extending towards Afghanistan and Indus River Valley ( History 101, lecture 4). The population of the Greeks and their interaction with other societies greatly increased due to trading activity they were involved in. They also had no wring emphasis they only had oral forms of interaction.
Since early Greeks had no political administration and institution, local communities were dominated by “big man” (History 102, lecture 4). The big man was not a king or official or someone with inherited position within an institution but a popular guy and a good warrior who attract followers. The Greeks were greatly involve in warfare unlike other society. They were notoriously aggressive warriors (Drews & Robert, 2009). They “fought to live and lived to fight” and ‘drunk the blood of their enemies and used the scalps as napkins”.
The heavily armed soldiers were standing in a long, parallel lines close to each other. Every soldier carrying large round shield which covered his own left side and right side of the man on his left. The phalanx was densely packed and could not easily turn to left or right. Once they were victorious, the losses on the other end were extremely heavy as the victors would use their swords to kill the defeated enemy. The Greek soldiers were very strong men and they were note by foreigners as “ men of bronze” (Herodotus , Histories , 2.152)
In conclusion, according to Herodotus, it is clearly evidence that the Greeks really participated in trade which enabled them to expand their territory and acquire wealth. Their worriers were men who were highly respected and admired since they have no organized political system or institutions.
References
Boardman, J. (1999). The Greeks Overseas: Their Colonies and Trade.4th rev. ed., London:
Hudson
Drews, R. (2004) early readers: The Beginning of Mounted Warfare in Asia and Europe.
London: Prentice Hall.
Lecture 4
Lecture 5 Read More
Share:
Tags
Cite this document
(“Herodotus Assignment Example | Topics and Well Written Essays - 250 words”, n.d.)
Herodotus Assignment Example | Topics and Well Written Essays - 250 words. Retrieved from https://studentshare.org/history/1623539-herodotus

CHECK THESE SAMPLES OF Herodotus

...? Herodotus Famously known as Father of History, Herodotus was the first known Greek historian. Even though he was a great historian, few details have been recorded by himself and the historians, as well, about his life. It was believed that he was born at Halicarnassus, a Greek city in Asia Minor. There was no precise record of the date of his birth and death. However, it can be estimated from the details of the book he wrote, The Histories, and from another source book by the Athenian historian. In book seven of The Histories he mentioned the execution of two Spartans in Athens, and according to another source book The history of the Peloponnesian War it happened in the winter season of 430-429 BC,...
4 Pages(1000 words)Research Paper

Assessing the Historical Record: Ancient Sources and the Expansion of the Persian Empire

...? Assessing the Historical Record: Ancient Sources and the Expansion of the Persian Empire By Department Herodotus’ account of the Persian Empire, its origins and the aggrandizing wars of its early kings, presents modern observers with a scrupulously detailed account of events scarcely 100 years removed from the writer’s own time. The reader may well consider that Herodotus, in his long travels throughout Asia and parts of Europe, uncovered fact and anecdote from individuals in a position to speak authoritatively on the subject, and only a generation removed from the wars of Cyrus the Great, Cambyses and Darius I. A master at gathering, ordering and synthesizing information, Herodotus...
5 Pages(1250 words)Essay

...be sure how the pyramids were built”. Ever since the discovery of the Giza pyramids, archeologists and engineering experts have been contemplating on the technique behind the construction of Giza pyramids. The experts have laid down few theories to unravel the mystery surrounding the construction of these mysterious monuments. Two of such theory is the “Davidovits Pyramid Theory” put forward by Joseph Davidovits in 1988, and the one claimed by Herodotus in 450 B.C. According to Davidovits, the Giza pyramids are built using stone blocks which are of geopolymeric nature. These blocks were made by means of alchemistry and had the ability of give ultimate perfection to the pyramid structure. While the theory of...
3 Pages(750 words)Research Paper

Aeschylus and Herodotus' Portrayals of Persians

...?Aeschylus and Herodotus’ Portrayals of Persians The successful uprisings of the Greeks against the Persians are a of debate in today’s world. Darius and Xerxes are the main cause of these revolts. Greek people are characterized as people fighting for democratic space and freedom from authoritarian rule. It is a war against tyranny and oppression that they have been subjected to for a long duration. Persians viewed Greeks as weak and hence wanted to put all the Greek states under their own authority. However, as Persian engaged in protracted war, the unexpected happened and they were defeated on the battlefield. Persian war on Greeks is found on the work of Aeschylus a playwright and Herodotus a historian...
3 Pages(750 words)Essay

...? Herodotus Lecturer: Herodotus Herodotus was a Greek historian and is referred to as the Father of History. Herodotus was born in Halicarnassus in the Asia Minor which was then dependent of the Persians. His farther was called Lyxes and his mother Rhaeo. By being born of a Persian subject, and he continued to be so until he was approximately 30 to 35 years. At the time he was being born, Halicarnassus was under the rule of queen Artemisia. He thoroughly got Greek education that made him to embrace the three essential subjects to a Greek which include: liberal education, music, gymnastic training and grammar (Goodwin 1996). Herodotus had shown initial...
4 Pages(1000 words)Essay

... to its true manifestation from Homer’s version to that of Herodotus. Men began seeking corroboration from testimonies of contemporaries and evidence encompassed in statues, shrines and documentation, which saw the emergence of a new breed of narrators and orators of events both past and present. It does not matter whether they are Greek or Roman, but the vital element is that they all held the value of relevance and premise with high regard (Luce 18). There were those who were content with rationality of their accounts of history while others depended on eye witness accounts for their genre of history. Subject matter is also another important matter to consider when considering Greek history because it describes the context... in which they...
5 Pages(1250 words)Book Report/Review

How coherent a work is Herodotus' Histories

...How coherent a work are The Histories? Herodotus lived and wrote in the 5th century BCE, at the intersection of Greek and Persian cultures and duringa time of extraordinary intellectual curiosity and change. Successive generations have acclaimed him as the world’s first historian and sometimes also the first anthropologist, and have judged him based on their respective concepts of these disciplines in their time. There has been copious praise as well as criticism but regardless of their position, those who sat in judgement over Herodotus throughout the centuries, have often seen his work as fragmented and digressing into fable and even those who were prepared to step outside the confines of the thinking...
10 Pages(2500 words)Essay

...ARE THE STORIES TOLD BY HOMER AND HERODOTUS ABOUT WOMEN, THEIR ACTIVITIES, AND THEIR ABDUCTION, SUPPORTED BY ANY EVIDENCE THAT MIGHT MAKE THOSE STORIES AMOUNT TO HISTORY? Name Course Instructor Institution Introduction Herodotus was historian from Greek and was born in Halicarnasus, Carie (present-day Bodram, located in Turkey) and stayed in the seventh century BC. Commonly known as "The Father of the past" (initially talked by Cicero), he was the earliest historian well-known to gather his materials methodically and decisively, and then to plan them into a historiography story. The Histories—his work of art and the only job he is celebrated to have created—is an account of his "investigation"...
5 Pages(1250 words)Essay
sponsored ads
Save Your Time for More Important Things
Let us write or edit the assignment on your topic "Herodotus" with a personal 20% discount.
GRAB THE BEST PAPER

Let us find you another Assignment on topic Herodotus for FREE!