Comments (0)
Add to wishlistDelete from wishlist
Cite this document
Summary
The Civil Rights Movement came out as a result of the so-called unfinished business in the struggle against racial discrimination engendered by slavery. The Civil War was thought to have ended slavery in the South but discriminatory practices persisted all throughout into the…
Download full paperFile format: .doc, available for editing
HIDE THIS PAPERGRAB THE BEST PAPER97.2% of users find it useful 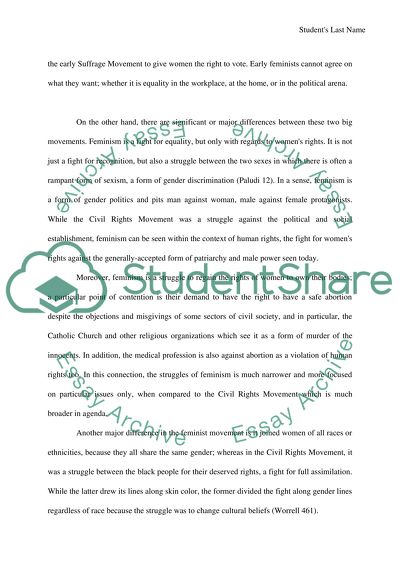 Full The Civil Rights and Feminist Movements (Similarities and Differences) 13 May (History and Political Science)
The Civil Rights Movement came out as a result of the so-called unfinished business in the struggle against racial discrimination engendered by slavery. The Civil War was thought to have ended slavery in the South but discriminatory practices persisted all throughout into the late 1950s and 1960s. Many black Americans thought they need to raise new awareness of this continuing discrimination manifested by lack of equality in their civil rights, education, health care, job opportunities, housing, and in practically all spheres of American life. Blacks came to realize that if they are to attain their full emancipation from slavery, discrimination is to stop also, and hence the Civil Rights Movement came into being for this very reason.
It took a while for the Civil Rights Movement to become unified, because many of its early leaders pursued their own agenda on a piece-meal basis. Until influential leaders like Medgar Evers and Martin Luther King came along, the movement was fragmented and due to this situation, it lacked the cohesion necessary to achieve its stated political and social aims. It is admittedly and doubly difficult for any mass movement to achieve any objective if leaders are not united, and this was the case during the early years of the Civil Rights Movement. The entrenched interests of the white supremacists and the political establishment are not going to give way that easily, and many of them saw blacks as a threat to the American way of life.
In this regard, the early Feminist Movement was strikingly similar to the Civil Rights Movement in that it was also fragmented, with no clear articulation of what it tries to achieve. Many feminists pursued different agendas on their own, although feminism owes its origins to the early Suffrage Movement to give women the right to vote. Early feminists cannot agree on what they want; whether it is equality in the workplace, at the home, or in the political arena.
On the other hand, there are significant or major differences between these two big movements. Feminism is a fight for equality, but only with regards to womens rights. It is not just a fight for recognition, but also a struggle between the two sexes in which there is often a rampant form of sexism, a form of gender discrimination (Paludi 12). In a sense, feminism is a form of gender politics and pits man against woman, male against female protagonists. While the Civil Rights Movement was a struggle against the political and social establishment, feminism can be seen within the context of human rights, the fight for womens rights against the generally-accepted form of patriarchy and male power seen today.
Moreover, feminism is a struggle to regain the rights of women to own their bodies; a particular point of contention is their demand to have the right to have a safe abortion despite the objections and misgivings of some sectors of civil society, and in particular, the Catholic Church and other religious organizations which see it as a form of murder of the innocents. In addition, the medical profession is also against abortion as a violation of human rights too. In this connection, the struggles of feminism is much narrower and more focused on particular issues only, when compared to the Civil Rights Movement which is much broader in agenda.
Another major difference in the feminist movement is it joined women of all races or ethnicities, because they all share the same gender; whereas in the Civil Rights Movement, it was a struggle between the black people for their deserved rights, a fight for full assimilation. While the latter drew its lines along skin color, the former divided the fight along gender lines regardless of race because the struggle was to change cultural beliefs (Worrell 461).
The similarity in the two mass movements is in their use of the same techniques or strategies to attain their objectives, such as prayer rallies, sit-ins, protest marches or vigils at the United States Supreme Court while their differences were in their scope and aims. To this extent, both activist movements (Black 183) attained varying degrees of success.
Works Cited
Black, Allida M. Modern American Queer History. Philadelphia, PA, USA: Temple University Press, 2001. Print
Paludi, Michele Antoinette. Feminism and Women’s Rights Worldwide. Santa Barbara, CA, USA: ABC-CLIO, 2010. Print.
Worrell, Judith. Encyclopedia of Women and Gender: Sex Similarities and Differences and the Impact of Society on Gender. San Diego, CA, USA: Academic Press, 2001. Print. Read More
Share:
Tags
Cite this document
(“Are the problems faced by the feminist and sexual emancipation Essay”, n.d.)
Are the problems faced by the feminist and sexual emancipation Essay. Retrieved from https://studentshare.org/history/1621648-are-the-problems-faced-by-the-feminist-and-sexual-emancipation-movements-similar-to-those-faced-by-civil-rights-movement-or-are-there-major-differences

“Are the Problems Faced by the Feminist and Sexual Emancipation Essay”, n.d. https://studentshare.org/history/1621648-are-the-problems-faced-by-the-feminist-and-sexual-emancipation-movements-similar-to-those-faced-by-civil-rights-movement-or-are-there-major-differences.
Comments (0)
Click to create a comment or rate a document

...led to class, ethnic and sectional conflicts between north and south. The civil war was prompted by economic and social differences between the north and the south, state versus federal rights, slavery, growth of abolitionist movement as well as the election of Abraham Lincoln among others (Jones, 1996).The south was an agrarian plantation economy and remained bound by traditional values. Family ties, kinship and hierarchy were still important and the south fought to preserve these values. Slavery was thus essential for the regions economy and culture. There was also slow population growth due to migration of people to the cities in the north. The north on the other hand...
8 Pages(2000 words)Essay

...the servitude in the United States of America. It was the 14th amendment that highly benefited the black community. It granted citizenship to the blacks and barred states from cutting their immunities and privileges as prescribed in the constitution. It also prohibited all states from taking an individual’s liberty, life and property and granted equal laws’ protection. Previously, the congress never used to investigate the humiliations, lynching and abuses that the Negroes suffered. On passing these amendments, majority of blacks gained courage of standing up for their rights and expressing their beliefs. The augment of the current civil rights movement...
5 Pages(1250 words)Essay

...The Civil Rights Movement Set in Jackson Mississippi in the early 1960s, The Help provides a succinct ofthe relations between people of different classes and races. The novel centers on a century subsequent to the American Civil War. During this era, African American women did not have job options than to work as oppressed domestic servants for rich, white families. The Help exemplifies the difficulties such women faced as socialites entrusted the care of their children to the African American maid. This was while the latter had no time to care for their own families. This paper will examine the novel The Help, connecting its themes and...
6 Pages(1500 words)Research Paper

... Civil Rights Movement The civil rights movement was one of the global political movements aimed at the enhancing equality before the law that occurred between the 1950s and the 1980s (Mcwhorter 12). This movement was similar to the civil resistance campaigns which were usually accompanied by armed rebellion and civil unrest. These procedures were extremely tenuous in most states hence; most movements were not able to achieve the set standards. This paper will describe how Martin Luther King and Malcolm X had a vast influence in the civil rights movement. In the early 1960s, America was struggling to cope with anxiety through several methodologies. This was the period that was closely associated with the rise of Black Nationalism... ....
3 Pages(750 words)Essay

...﻿Coach carter: Major problems faced by students The modern student population is faced with a lot of problems that limit their exposure to education and proper learning environments. With the sector incorporating many changes in both the environment and the curriculum, many factors have generated from these changes which distract the modern student. Different from education in past centuries, education today is more indulging and demanding with students having to indulge in more co-curricular activities and education at the same time. Apart from educational factors, social factors also have negative effects on the education life of...
3 Pages(750 words)Movie Review

...strength to launch large scale protests and demonstrations. By 1950 the civil rights movement was able to bring the issue of inequality into the justice system resulting in decisions such as Brown vs. Board of Education that overturned a century of injustice. The concentration of black voters in major cities enabled the movement to become more focused and more militant. In conclusion, the civil rights movement of the 1920s celebrated African-American culture while the movement in the 1950s emphasized constitutional rights. The artistic movement of the...
2 Pages(500 words)Essay

...Without question one of the most significant events of the Civil Rights era was the Supreme Court’s decision in Brown v. Board of Education of Topeka(Odyssey 5), handed down by the court in 1954 (5). The case, which originated in Charleston, South Carolina, was heard by the Supreme Court grouped together with like cases from other states under the single title, thus, Topeka as opposed to Charleston (5). The Supreme Court ruling established that segregation was not legal, and set into motion a series of subsequent events, many manipulated by the participants of the Civil Rights movement, that caused states to rescind segregation both in law and in...
2 Pages(500 words)Essay

...Motors faces the following problems related to space availability and inventory management: The company does not of excess space for storage of parts, in order to keep its inventory, it had to compromise on space available for placing the cars it sold. The company did not have enough financial resources to purchase more space in order to accommodate the required inventory while keeping the same level of stock of cars. The inventory management system was based on historical data rather than forecasting techniques to meet future demands. All the parts had different levels of demand and different suppliers; hence the company had to deal with many suppliers at the same time....
11 Pages(2750 words)Essay

...that have lead to the organization and consequently rise of the movement. I think it is important that pictures be also included in the study of the civil rights movement to be familiar with the faces of these people who have changed history. The picture includes Rosa Parks and Martin Luther King to name a few. Davis, Jack E. The Civil Right Movement. Oxford: Blackwell Publishers Inc., 2001. Abstract: This book, edited by Jack Davis contains twelve essays that tackle the development of the civil right s movement that is supported by primary documents....
4 Pages(1000 words)Annotated Bibliography
sponsored ads
Save Your Time for More Important Things
Let us write or edit the essay on your topic "Are the problems faced by the feminist and sexual emancipation movements similar to those faced by civil rights movement Or are there major differences" with a personal 20% discount.
GRAB THE BEST PAPER

Let us find you another Essay on topic Are the problems faced by the feminist and sexual emancipation movements similar to those faced by civil rights movement Or are there major differences for FREE!