Comments (0)
Add to wishlistDelete from wishlist
Cite this document
Summary
Women, nudged by the availability of the apt opportunities and the relative dilution of the gender base traditional values, increasingly participated in the industrial…
Download full paperFile format: .doc, available for editing
HIDE THIS PAPERGRAB THE BEST PAPER95.6% of users find it useful 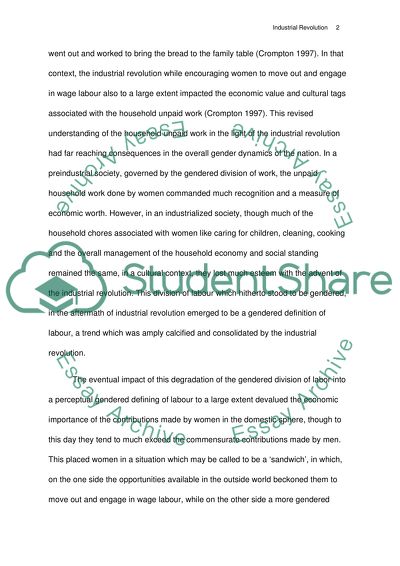 of the History and Political Science of the Concerned 4 March Apart from assessing the impact of industrialization upon women, it is also important that our understanding of industrialization itself is determined by the gender division of the workforce.
In a very direct context, industrial revolution encouraged the women to engage in paid industrial labour. Women, nudged by the availability of the apt opportunities and the relative dilution of the gender base traditional values, increasingly participated in the industrial workforce (Stearns 1998, p. 140). Many industries like the textile industry extended to women the opportunity to earn wages by working in factories (More 2000, p. 55). However, the thing that deserves due attention is that with the supplanting of the farm labour by the wage labour, leading to the participation of the women in the paid workforce, it is the unpaid household work that accrued new meanings and perceptions, making the eventual understanding of industrial revolution dependant on the vantage point from which a workforce divided on the gender lines tends to envisage it.
It is not that earlier the women were not engaged in any kind of work. However, a gendered division of work relegated the women to engage in the unpaid household work, while men were considered to be the primary wage earners who went out and worked to bring the bread to the family table (Crompton 1997). In that context, the industrial revolution while encouraging women to move out and engage in wage labour also to a large extent impacted the economic value and cultural tags associated with the household unpaid work (Crompton 1997). This revised understanding of the household unpaid work in the light of the industrial revolution had far reaching consequences in the overall gender dynamics of the nation. In a preindustrial society, governed by the gendered division of work, the unpaid household work done by women commanded much recognition and a measure of economic worth. However, in an industrialized society, though much of the household chores associated with women like caring for children, cleaning, cooking and the overall management of the household economy and social standing remained the same, in a cultural context, they lost much esteem with the advent of the industrial revolution. This division of labour which hitherto stood to be gendered, in the aftermath of industrial revolution emerged to be a gendered definition of labour, a trend which was amply calcified and consolidated by the industrial revolution.
The eventual impact of this degradation of the gendered division of labor into a perceptual gendered defining of labour to a large extent devalued the economic importance of the contributions made by women in the domestic sphere, though to this day they tend to much exceed the commensurate contributions made by men. This placed women in a situation which may be called to be a ‘sandwich’, in which, on the one side the opportunities available in the outside world beckoned them to move out and engage in wage labour, while on the other side a more gendered defining of labour though deprived them of the traditionally endowed economic and social worth associated with their unpaid household work, in no way relieved them of the traditional social expectations from them in the domestic sphere. This in a way made the post industrial professional environment more conducive for men, while being averse to and unappreciative of women in many ways.
Reference List
Crompton, R 1997, Women and Work in Modern Britain, Oxford University Press,
Oxford.
More, C 2000, Understanding the Industrial Revolution, Routledge, London.
Stearns, PN 1998, The Industrial Revolution in World History, Westview Press,
Boulder, CO. Read More
Share:
Tags
Cite this document
(“Apart from assessing the impact of industrialization upon women, it is Essay”, n.d.)
Apart from assessing the impact of industrialization upon women, it is Essay. Retrieved from https://studentshare.org/history/1616923-apart-from-assessing-the-impact-of-industrialization-upon-women-it-is-also-important-that-our-understanding-of-industrialization-itself-is-determined-by-the-gender-division-of-the-workforce

“Apart from Assessing the Impact of Industrialization Upon Women, It Is Essay”, n.d. https://studentshare.org/history/1616923-apart-from-assessing-the-impact-of-industrialization-upon-women-it-is-also-important-that-our-understanding-of-industrialization-itself-is-determined-by-the-gender-division-of-the-workforce.
Comments (0)
Click to create a comment or rate a document

The Impact of Urban Industrialization on Early Twentieth-Century Art

...events contributed to the artists’ understanding of and attitudes towards these cultures? How does the use of the female subject compare and contrast with previous representations of women? Discuss the growing urbanization of the modern European city during 1850-1914. What are some of the key historical-economical factors that shaped this process? How did artists react to the changing urban space and how does that reaction manifest itself in the themes and styles of their works? Support your essay with 3-5 examples (identify them by name of artist and title) from three separate artistic movements (styles). Possible themes to consider include: a), artist’s construction of social...
9 Pages(2250 words)Research Paper

...? Industrialization Marx was a German revolutionary economist who is known to be the founder of the Communist movement. He d thewide industrial change in Britain and decided to write about it. Besides being an economist, Marx was also a philosopher. Marx observed the class struggle in which the oppressed reacted against the oppressors. He also described the victory of one class as a pavement to future freedom of the rest of the society and the generations to come. In the past Britain history, several groups emerged each claiming the authority over the other. The foundation of all Marxist leads to the analysis of political parties that formed in the early years in the...
3 Pages(750 words)Essay

...region, Africa, Europe and Latin America experienced massive modernization. This modernization was represented by not only by high levels of economic authority but also by factors such as functional specialization and general structural differentiation. These factors, especially the autonomy of the economic system from the government contributed greatly to this high level of modernization or industrialization for that matter. Besides the factors highlighted above, there also others that equally led to the prosperity realizes in most countries in the above named region. These factors include: An open trading system enjoying minimal or no import duty greatly stimulated...
8 Pages(2000 words)Essay

The Impact of Industrialization

...and economic growth. Labor-saving devices and new technologies freed workers to enter the factories, which also drew upon immigrant labor. Aided by the spread of the transportation network, the boom period in American industrialization came in the second half of the 19th century. "In the 1890s, groups of Americans seemed to be estranged from each other as they rarely had been before. A few were enjoying the fruits of astonishing wealth, building for themselves magnificent, multimillion-dollar "summer cottages" reminiscent of glittering European palaces" (Created equal, Ch.18, 2005). The most important event was that the working American class was shaped. This process...
8 Pages(2000 words)Term Paper

...the free market policies of competition for rebuilding its industry, but due to its cultural and political makeup of consensus building they adopted a more socialistic outlook. Lead by Germany and closely followed by Austria, Holland and Switzerland they industrialized with cooperation between all stakeholders, the financial institutions, the entrepreneurs and the labour, who had power sharing representation on company boards (Hutton, W 1995). The respective governments also looked at this arrangement benignly as they themselves were products of national coalitions and consensus was of paramount importance. They invested heavily in social welfare. The result was that...
7 Pages(1750 words)Essay

...participation in and control over their work. Costs were high, however, and the volume of production was relatively low. Industrialization greatly heightened output and made key goods, sometimes called commodities, more accessible. Pros and Cons of industrialization in developing countries: Industrialization has a great impact on modern economy. It made rich more richer and poor still poorer, due to dominance of the contemporary capitalism. For developing countries, growth and development are much less about pushing the technology frontier and much more about changing the structure of production. While recent researches have enhanced our...
10 Pages(2500 words)Essay

...British Industrialization Industrialization in Britain was a long, slow, and uneven process. Economic historians the beginning of what has become known as the “Industrial Revolution” in 1800s where the process of changing to mechanized, factory-based industrial economy was completed. Its impact on the population and existing way of life were drastically experienced from this period until the 1900s. According to Stuart Hall et al., the changes involved were so momentous that their shadow fell across the lives even of those who were not directly affected. (p. 133) One of the major results of industrialization was the dramatic growth of the...
2 Pages(500 words)Essay

..., and warranties. Fourth, new industries of the late 1800s also incurred social and ecological expenses and enjoyed likewise benefits. These factors of industry entailed laborsaving equipment with workers vulnerable to bodily harm and pollution. Examples of new technologies that led to the growth of industries are equipment that made steel stronger and railways. Two inventions in organization developed by corporations are downsizing and vertical incorporation and a large staff. The device of downsizing and vertical incorporation mostly applied to oil companies that made deals with railway companies for transportation benefits. This device aided in ridding the...
1 Pages(250 words)Coursework

...that it was longer than all of the tracks in Europe combined. Yet this was added by another 5,000 miles of tracks were laid down that by the end of the 1850s, there were already more than 30,000 miles of tracks that were laid down. And as if this was not enough, miles of canals were also dug to facilitate steamboats travel on water. These unprecedented construction in railroad and canals fueled the industrialization further as it did not only moved people and goods efficiently, but also facilitated transfer of information and drew people into the economy to stimulate the growth further. The telegraph network was also developed during the same period and complemented...
1 Pages(250 words)Essay
sponsored ads
Save Your Time for More Important Things
Let us write or edit the essay on your topic "Apart from assessing the impact of industrialization upon women, it is also important that our understanding of industrialization itself is determined by the gender division of the workforce" with a personal 20% discount.
GRAB THE BEST PAPER