Comments (0)
Add to wishlistDelete from wishlist
Cite this document
Summary
While social history of the American people is emphasized alongside the underlying economic and political history, features of…
Download full paperFile format: .doc, available for editing
HIDE THIS PAPERGRAB THE BEST PAPER95% of users find it useful 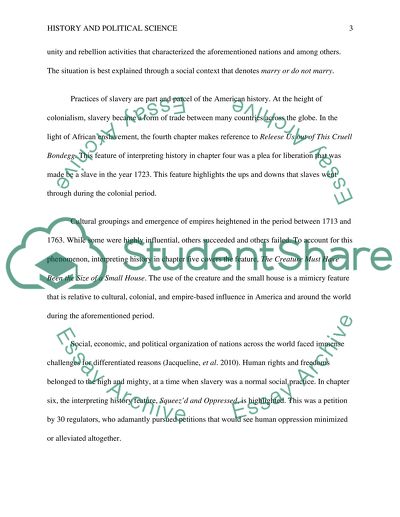 Extract of sample "A Precis on Interpreting History"

A Précis on Interpreting History Affiliation: The book, Created Equal, gives an account of the American history, and highlights trends in social, economic, and political environment in America. While social history of the American people is emphasized alongside the underlying economic and political history, features of interpreting history are employed at the end of each chapter for the purpose of driving key points home. Variant contexts are adopted in relation to the contents of each chapter, an aspect that makes it easy to understand the American history from a diverse perspective.
In chapter one, the covered feature of interpreting history is entitled, These Gods That We Worship Give Us Everything We Need. This feature denotes that the gods provide for the human race. In the same respect, the forefathers of the American people laid a strong foundation that sees their survival to date. The use of this feature is critically linked to American history, especially in regard to the foundation of America as a nation.
Anne Bradstreet: “The Tenth Muse, Lately Sprung Up in America” is the interpreting history feature included in the second chapter of the book. This feature highlights Anne Bradstreet’s collection of poems. In this text, Anne Bradstreet talks about the social, economic, and political environment in America in the 1600’s. American was changing across these aspects, thus capturing Anne Bradstreet’s attention alongside that of the world in general.
The third chapter of the book emphasizes on the social groupings in America, and the rise of intensive political organization in and out of North America. To mimic the scenario at the time, the Marry or do not marry feature is employed at the interpreting history section of the third chapter. Massive political activities across America, Spain, England, and France were going on in the period between 1660 and 1715. The interpreting history feature in this chapter evaluates unity and rebellion activities that characterized the aforementioned nations and among others. The situation is best explained through a social context that denotes marry or do not marry.
Practices of slavery are part and parcel of the American history. At the height of colonialism, slavery became a form of trade between many countries across the globe. In the light of African enslavement, the fourth chapter makes reference to Releese Us out of This Cruell Bondegg. This feature of interpreting history in chapter four was a plea for liberation that was made be a slave in the year 1723. This feature highlights the ups and downs that slaves went through during the colonial period.
Cultural groupings and emergence of empires heightened in the period between 1713 and 1763. While some were highly influential, others succeeded and others failed. To account for this phenomenon, interpreting history in chapter five covers the feature, The Creature Must Have Been the Size of a Small House. The use of the creature and the small house is a mimicry feature that is relative to cultural, colonial, and empire-based influence in America and around the world during the aforementioned period.
Social, economic, and political organization of nations across the world faced immense challenges for differentiated reasons (Jacqueline, et al. 2010). Human rights and freedoms belonged to the high and mighty, at a time when slavery was a normal social practice. In chapter six, the interpreting history feature, Squeez’d and Oppressed, is highlighted. This was a petition by 30 regulators, who adamantly pursued petitions that would see human oppression minimized or alleviated altogether.
Finally, the interpreting history part of the seventh chapter is entitled, By What Means Do You Expect to Conquer America. This feature is relative to America’s fight for independence. Political activity heightened between 1775 and1783, especially in respect to America’s independence that came in the year 1776 (Jacqueline, et al. 2010). This feature presents America as a hard-to-conquer nation.
Reference
Jacqueline, J. et al. (2010). Created Equal: A History of the United States (3rd edition). New York: Pearson. Read More
Share:
Tags
Cite this document
(“A Precis on Interpreting History Essay Example | Topics and Well Written Essays - 500 words”, n.d.)
A Precis on Interpreting History Essay Example | Topics and Well Written Essays - 500 words. Retrieved from https://studentshare.org/history/1612918-a-precis-on-interpreting-history

CHECK THESE SAMPLES OF A Precis on Interpreting History

...September 11, 2001 Incident: A Precis By (Module and number) September 11, 2001 Incident: A Precis On September 11, 2001 the United States of America suffered a set of destructive terrorist attacks that were heavily planned to cause enormous destructions and eye-catching accidents. Four commercial airplanes flying in the USA were hijacked and two of them were flown to hit the World Trade Center. The twin tower workplace was occupied by almost 40,000 civilians. The other two airplanes hit Pentagon and Pennsylvania respectively. The hijacking on New York was captured live on handheld camcorders that gave way to broadcast the footage around the world (House of Commons Librarary 2001, p. 11). The incident...
2 Pages(500 words)Essay

Birth of the American Republic

...﻿Precis: Fishing for Answers Precis Increasing the volume of fishing activities is often considered by governments as an effective solution for addressing intensive economic problems of the state and for covering the food needs of local population. However, this strategy can have a series of severe implications, as explained in the article under examination. In fact, the level of existing fishing stocks internationally shows trends for continuous decrease, a phenomenon related to various factors, such as overfishing, extensive discards (i.e. marine animals that are caught along with fish and are returned to sea, often already dead) and habitat degradation (Kura et al. 2/ VIII). Moreover, the expansion of...
2 Pages(500 words)Essay

... number: When Worlds Collides Précis Précis Camille Parmesan, an ecologist at the of Texas, argues that many species will shift thousands of kilometers closer to the poles when the rate of heating increases and that many species that shifted habitat thousands of years ago may be much challenged when doing it now. Parmesan claims that up to 70 species of harlequin frogs and hundreds of coral species have already exited their original habitats. He supposes that plenty more of the species that are stranded on mountaintops and other shreds of habitat risk their extinction before they escape to the poles and people should take the action of picking up threatened species (Douglas, 2). Enhancement of human assisted migration gives... number: When...
2 Pages(500 words)Essay

...of the s Section Precis The Future of the Forest” published on June 11, 2009 in The Economist describes how deforestation in the Amazon occurred since 19th century. The author provides historical facts and statistical figures researched by government and private agencies, to show that the Brazilian government had not been able to stop or to slow down deforestation in the Amazon so far. The author, a staunch environmentalist, analyzes the various steps taken by the Brazilian government in implementing land reforms and the minimal impact it had on deforestation; so that people and international organizations can come up with such solutions that have instant effect on controlling deforestation of the Amazon. This article...
2 Pages(500 words)Essay

... Lecturer: PRÉCIS Rosenberg, Tina. “The Burden of Thirst.” National Geographic Magazine. 25 year old Aylito Binayo’s, a native ofthe Foro village in the Konso district of southwestern Ethiopia, struggles daily to collect water in addition to her other domestic chores. She and other women in her village have spent 8 hours daily on a steep mountain incline to collect 150 pounds of dirty river water as this is the only water source she and the rest of her village they have access to. She has done this for nearly the whole of her life. Her story mirrors that of 900 million others. These figures are more disconcerting when 2.5 billion people don’t dispose of their waste safely. And 3.3 million die annually from poor hygiene... Lecturer: PRÉCIS...
2 Pages(500 words)Essay

...should be legalized in order to assist the adults who have terminal illness. This response is sympathetic to patient who is suffering and dying. They deliver themselves when they accept PAS on their own without coercion. When all the systems are in proper working condition, the choice of PAS will come after all other ways of treatment are exhausted and not any one method is able to treat the suffering the patient has. If the patient is in the right mind, he or she is allowed to call for assistance to end their life. This can be interpreted to mean that, a physician is allowed to give medicine prescription that will speed up death. This is only done with the consent of the patient. (1) There are fears that minority and...
4 Pages(1000 words)Essay
sponsored ads
Save Your Time for More Important Things
Let us write or edit the essay on your topic "A Precis on Interpreting History" with a personal 20% discount.
GRAB THE BEST PAPER

Let us find you another Essay on topic A Precis on Interpreting History for FREE!