Comments (0)
Add to wishlistDelete from wishlist
Cite this document
Summary
V. Thesis Statement: The Emancipation Proclamation by Abraham Lincoln may have been drafted and passed rapidly with some loopholes in the hopes of fully abolishing slavery, and while the slaves that were freed and considered to be freemen under the proclamation, they were still…
Download full paperFile format: .doc, available for editing
HIDE THIS PAPERGRAB THE BEST PAPER95.2% of users find it useful 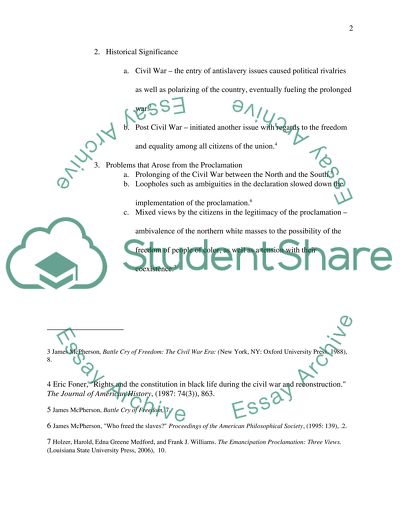 Research Paper Proposal I. II. Your III. The Legacy of Abraham Lincoln’s Emancipation Proclamation IV. American Civil War
V. Thesis Statement: The Emancipation Proclamation by Abraham Lincoln may have been drafted and passed rapidly with some loopholes in the hopes of fully abolishing slavery, and while the slaves that were freed and considered to be freemen under the proclamation, they were still not considered to be citizens of the United States. Also, the steps needed for the successful implementation of the proclamation not only took a very long time before being realized, but also took many lives before it happened.
VI. Outline:
A. Introduction
B. Body of Paper
1. Brief Description of the Proclamation
a. What it contains – proclaimed that the ten states under the Confederate army must free all of the slaves, with the exemption of certain parishes and counties.1
b. Why it was created – to remove the chains of slavery and initiate its abolition2.
2. Historical Significance
a. Civil War – the entry of antislavery issues caused political rivalries as well as polarizing of the country, eventually fueling the prolonged war.3
b. Post Civil War – initiated another issue with regards to the freedom and equality among all citizens of the union.4
3. Problems that Arose from the Proclamation
a. Prolonging of the Civil War between the North and the South.5
b. Loopholes such as ambiguities in the declaration slowed down the implementation of the proclamation.6
c. Mixed views by the citizens in the legitimacy of the proclamation –ambivalence of the northern white masses to the possibility of the freedom of people of color, as well as a tension with their coexistence.7
d. Skeptics that did not believe something such as slavery which existed for 150 years needs to be abolished, which caused further dissent.8
4. Implications of the Implemented Proclamation
a. Many slaves abandoned their masters and escaped to join the union.9
b. The proclamation was only limited to certain states, with some strongly opposing the legitimacy of the proclamation.10
c. Freed slaves were still not considered as citizens of the union.11
d. Events that happened after the proclamation – some slaves chose to leave while some chose to stay, and this eventually left the plantation fields deserted.12
C. Conclusion
1. Analysis of research
2. Author’s conclusion
Bibliography
Amar, Akhil Reed. "The David C. Baum Lecture: Abraham Lincoln and the American Union." University of Illinois Law Review, 2001: 2001(5):1109-1135.
Foner, Eric. "Rights and the constitution in black life during the civil war and reconstruction." The Journal of American History, 1987: 74(3): 863-883.
Guelzo, Allen C. Lincolns Emancipation Proclamation: The End of Slavery in America. New York, NY: Simon & Schuster, 2004.
Holzer, Harold, Edna Greene Medford, and Frank J. Williams. The Emancipation Proclamation: Three Views. Louisiana State University Press, 2006.
Lincoln, Abraham. "Emancipation Proclamation; January 1, 1863." The Avalon Project: Documents in Law, History and Diplomacy. 2008. http://avalon.law.yale.edu/19th_century/emancipa.asp (accessed January 12, 2013).
McPherson, James. Battle Cry of Freedom:The Civil War Era: The Civil War Era. New York, NY: Oxford University Press, 1988.
McPherson, James. "Who freed the slaves?" Proceedings of the American Philosophical Society, 1995: 139(1):1-10. Read More
Share:
Tags
Cite this document
(“Civil War Research Proposal Example | Topics and Well Written Essays - 500 words”, n.d.)
Retrieved from https://studentshare.org/history/1612596-civil-war

CHECK THESE SAMPLES OF Civil War

...Civil War Civil war in America was fought between 1861-1865 following the disputed election of Abraham Lincoln as president. The war was between the Northern State who were opposed to slavery and the Southern States, which did not want to see the end of slavery in their state. The war was fought maily at the Southern States, which also lead to the secession and formation of the Confederate State of America. The call for secession was rejected in totality by the slave States and the president, which in turn lead to the civil war. In the end in 1865, the confederate state surrendered marking the end of...
4 Pages(1000 words)Movie Review

...identification (all above optional – if you need them) History and Political Science Topic React to the ment that the Civil War was inevitable. Tell how you would have reacted to the attack on Fort Sumter. Include a discussion of the South’s arguments about States’ rights and “The Cause” as understood by Southerners. The Essay On issues such as the sovereignty of States, interpretations of the Constitution and particularly Slavery, the vast differences between North and South are evident, and the Civil War does seem to have been inevitable. Essential to the causes of the American Civil War is the strong feelings Southern States had...
2 Pages(500 words)Essay

...﻿Civil War Abstract Many scholars have observed that civil war usually present complex situations with which to deal. At the onset of a civil war, the immediate aftermath is usually death and other forms of atrocities. Many civil wars have been caused by the desire to wield power. Civil war exposes people to untold sufferings. Women and children are usually the hardest hit since they are highly vulnerable. Using secondary sources analysis and first hand observation, results indicate that civil wars cause emotional suffering, psychological...
12 Pages(3000 words)Essay

...At What Point Was The Civil War Inevitable? Details: al Affiliation: At What Point Was The Civil War Inevitable? The Civil War; the War for Southern Independence; the War of Secession; the War of Rebellion; the war between the North and the South; even the named seems to be wavering in unanimity. Characterized as “irrepressible,” “criminally stupid,” and/or “unnecessary bloodletting,” the controversy that goes deep to the causes of the war tells as much (Kurtz, 1985, p.130).With deep roots in the prevailing political and economic environment of the time,...
4 Pages(1000 words)Essay
sponsored ads
Save Your Time for More Important Things
Let us write or edit the research proposal on your topic "Civil War" with a personal 20% discount.
GRAB THE BEST PAPER

Let us find you another Research Proposal on topic Civil War for FREE!