Comments (0)
Add to wishlistDelete from wishlist
Cite this document
Summary
The film revolves around the life of the former US Secretary of Defense, Robert S. McNamara. The design of the feature film focuses on the interviews of the former…
Download full paperFile format: .doc, available for editing
HIDE THIS PAPERGRAB THE BEST PAPER93.6% of users find it useful 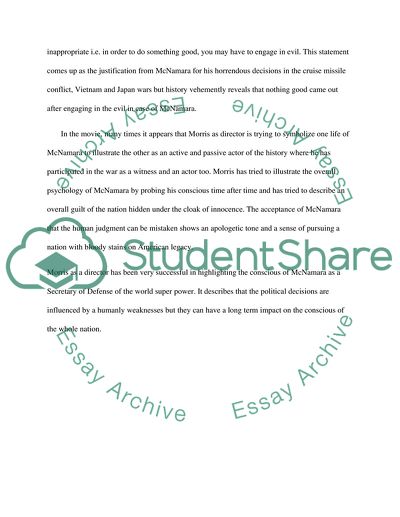 Movie Review: Fog of war Fog of war, the academy award winner for the best documentary feature film in 2003 was directed by Errol Morris. The film revolves around the life of the former US Secretary of Defense, Robert S. McNamara. The design of the feature film focuses on the interviews of the former secretary where he illustrates the reasons, observations and nature of the modern warfare. The documentary discusses the power of McNamara in international politics and his influences in establishing the American history. McNamara is regarded as the architect of Vietnam War which caused mammoth number of deaths and he also played an important participatory role in the World War II. The archival footage and McNamara’s interview highlight the lessons learnt from the wars and provide insights into the international relations and security issues of America.
When we saw the movie, we draw some very sound conclusions regarding McNamara’s body language. We see a man admitting his sheer blunders regarding the important political decisions whose repercussions ranged from Vietnam to Japan, causing thousands of deaths and saved the world from annihilation of nuclear war by sheer luck not because of intelligence information. The people would definitely agree that the crimes he committed are completely unforgiving and unforgettable. His decisions regarding life and death are themselves a depiction of painful humility for him as depicted in the documentary. Although McNamara admits that he has been terribly wrong with reference to Vietnam War and could have done more to redirect the decision of president’s office, but he does not say sorry although Morris tried to prompt him. This shows his stubborn and pride in himself. On one side, he seems to be regretful but on the other side; he is justifying the decisions which caused mammoth human loss. The movie comes up with eleven lessons learnt from the life of McNamara. But the one lesson seems to be very inappropriate i.e. in order to do something good, you may have to engage in evil. This statement comes up as the justification from McNamara for his horrendous decisions in the cruise missile conflict, Vietnam and Japan wars but history vehemently reveals that nothing good came out after engaging in the evil in case of McNamara.
In the movie, many times it appears that Morris as director is trying to symbolize one life of McNamara to illustrate the other as an active and passive actor of the history where he has participated in the war as a witness and an actor too. Morris has tried to illustrate the overall psychology of McNamara by probing his conscious time after time and has tried to describe an overall guilt of the nation hidden under the cloak of innocence. The acceptance of McNamara that the human judgment can be mistaken shows an apologetic tone and a sense of pursuing a nation with bloody stains on American legacy.
Morris as a director has been very successful in highlighting the conscious of McNamara as a Secretary of Defense of the world super power. It describes that the political decisions are influenced by a humanly weaknesses but they can have a long term impact on the conscious of the whole nation.
Work cited:
Jonathan, Kim. Rethinking the fog of war: McNamara, the movie, the monster. The Huffington
Post. 8 July. 2009. 30 November. 2012. http://www.unz.org/Pub/HuffingtonPost-2009jul-
02100
Josh, Vasquez. The fog of war. Slant Magazine. 3 October. 2003. 30 November. 2012.
http://www.slantmagazine.com/film/review/the-fog-of-war/759
Roger, Ebert. The fog of war. Chicago Sun times. 23 January. 2004. 30 November. 2012.
http://rogerebert.suntimes.com/apps/pbcs.dll/article?AID=%2F20040123%2FREVIEWS%2F401
230302%2F1023 Read More
Share:
Tags
Cite this document
(“Movie review Essay Example | Topics and Well Written Essays - 500 words - 3”, n.d.)
Movie review Essay Example | Topics and Well Written Essays - 500 words - 3. Retrieved from https://studentshare.org/history/1610313-movie-review

CHECK THESE SAMPLES OF Movie review

...?Movie Review: Darwin’s Nightmare There are two things which struck me instantly about this documentary, the first one undoubtedly being its But the second and more disheartening of the two is the nonchalance of the people of Mwanza, Tanzania who are portrayed in the movie. The film as we see is shot in such a way that the camera constantly shifts focus from person to object to activity to landscape which is exactly how the people featured in it seem to convey their thoughts and emotions (or the lack of it). This I think is the most haunting aspect of the film, the strong and unmistakable undertone of insouciance of which I will come back to a bit later. The plot revolves around different...
4 Pages(1000 words)Essay

...?Driving Miss Daisy Driving Miss Daisy is a film that explores aspects of race and age through a variety of filmic aesthetics and techniques. Throughout the film, lighting is used to great effect to create a sort of impressionistic aesthetic. Whereas film noir uses dark shadows to create effect, many times in Driving Miss Daisy muted tones and blurry focusing. One effect of this technique is not the dark noir undertones, but demonstrates the cloistered aspects Miss Daisy’s life. The lighting seems to indicate that this is an individual whose life will soon end. Another aesthetic effect of these focus and lighting techniques is that it casts story aspects as a sort of memory that is remembered or relayed in reverse. One... Miss Daisy Driving...
1 Pages(250 words)Movie Review

...? Gideon’s Trumpet Introduction In the movie’ Gideon’s Trumpet “Clarence Earl Gideon faces courts trial for anoffence he did not commit. During the trail, the court gives him a lawyer even though he does not require one. The setting of the movie recounts to the examination of the constitution and the necessary modifications since it portray the procedures of the constitution, that the law is superior to every person. The Fifth Amendment states the due procedures of the law. According to the due procedure of law, the law protects life, offers freedom or affluence. As the movie unfolds, Gideon is put behind bars, faces trail in the court of law and then imprisoned. Another significant thing to know about the procedures of the law... is that,...
6 Pages(1500 words)Movie Review

...Topic: Avatar Movie James Cameron and Jon Landau directed, wrote and produced Avatar. Viewers in the United s and London firstwatched this movie in December 2009. International viewers in over 100 countries and on 14,000 screens watched this movie within the first few weeks of its United Sates and London premiers. Avatar received many positive reviews and movie accolades including the Academy Awards for Best Art Direction, Best Cinematography and Best Visual Effects in March 2010 (Davis, 2009). This movie is listed in the genres of scientific fiction, adventure and animation. Film adapted advanced camera techniques, visual effects,...
3 Pages(750 words)Movie Review

...Drugstore Cowboy Drugstore Cowboy is a Movie about a group of drug users in the 1970s who rob drug stores in order to get money for their basic needs as well as to acquire drugs. The movie is an American crime drama movie that was produced in 1989. It was written by Daniel Yost and Van Sant and directed by Gus Van Sant. It is based on an autobiographical novel written by James Fogle. Drugstore Cowboy is a story of a dope addict and his crew that is set in Portland, Oregon in 1971. Bobby Hughes is the dope addict who has had the whole of his adult life either shooting up or in prison. He is smart and is married to Diane who is also an addict. In order to support their drug addiction, the...
3 Pages(750 words)Essay

...The movie, “A Raisin in the Sun” is based on a play that was written by a woman d Lorraine Hansberry. It is a story that contains powerful themes that explore the power of racial identity and family. The play has been performed on Broadway and has been made into several films. The most recent of these is the made of TV film featuring Sean Combs in one of the lead roles. Mr. Combs portrays Walter Lee Younger, the son of Momma Younger. Much of the conflict in the story centers on differing dreams for a $10,000 life insurance payment the Younger family received upon the death of the father. Walter Lee is sure that investing the money in a liquor store will provide the most long-term financial security for the family. ...
2 Pages(500 words)Movie Review

...REVIEW OF DOCUMENTARY ON IRAN By History and Political Science The of the School The and Where It Is Located The Date REVIEW OF DOCUMENTARY ON IRAN The BBC documentary on Iran provides insights about Iran. The documentary stars former BBC correspondent Rageh Omaar who embarks on a journey inside Iran and provides descriptions of the Iranian society. Iran is one of the most misconstrued nations in the world. Rageh Omaar provides insights from ordinary Iranians (Omaar, 2012). The documentary does not discuss the nuclear issues in Iran, or the political environment in the country. The aim of the documentary was to help the world understand the Iranian society based on the views of ordinary Iranians. The...
1 Pages(250 words)Movie Review

...Movie review: The Fall Movie review: The fall Directed by Tarsem Singh and produced in 2006, the fall film is a powerful visual movie that includes footage in 28 countries. The film is about Lee Pace (Roy), who is paralyzed from the waist down, an injury he got while trying to jump from the top of the bridge onto the back of a horse. While, in the hospital he thinks about committing suicide but then meets Alexandria, who is a Spanish girl with a broken arm who tries to bring him back to life. One conspicuous fact about the film is that the director continually leaves the audiences guessing about the mental state of Roy. This is because he tells Alexandria...
2 Pages(500 words)Movie Review

...Pushing Tin- Review The movie starring John Cusack and Billy Bob playing the roles of air traffic controllers at New York and narrates the story of two co-workers who were actually engaging into a competition of managing the stress of dealing with air traffic control at the busiest airports of the country. The main character, Nick Falzone, played by John Cusack, boasts about his performance and managing stress besides being able to reduce the employee turnover rate to 50% due to his sheer ability to manage the stress of managing a difficult job. Things get a new turn when a new fellow, Russell Bell, played by Billy Bob, is introduced as a calm and confident individual. He was someone who excelled in...
2 Pages(500 words)Essay

...Movie Review Movie Review Help The Help is an American drama film written and directed by Tate Taylor in and adapted from Kathryn Stockett’s novel of 2009 under the same name. Featuring an ensemble cast, the movie tells the story of the end to segregation in South America through the black maids in Jackson Miss. Jackson’s character spices up the movie with a tad superficially, flowing and a personalizing clique. A lot has been made of the patronizing figure, Skeeter, the young white woman. She leads other women in contributing to her book depicting the robust, stoic black woman as timid and unwilling to rise and speak for herself. The two...
2 Pages(500 words)Essay
sponsored ads
Save Your Time for More Important Things
Let us write or edit the essay on your topic "Movie review" with a personal 20% discount.
GRAB THE BEST PAPER

Let us find you another Essay on topic Movie review for FREE!