Comments (0)
Add to wishlistDelete from wishlist
Cite this document
Summary
The paper "Indian Culture" compares and contrasts several objects of the Indian societal integration. The culture that made them adopts a common religion, which they worship through symbolic representations. The relationships are quite fundamental for the coexistence of the cultural setting…
Download full paperFile format: .doc, available for editing
HIDE THIS PAPERGRAB THE BEST PAPER92.8% of users find it useful 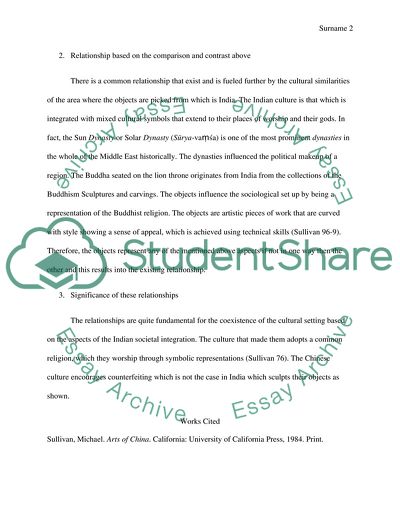 ﻿ Indian Culture
1. Comparison and contrast of the objects
The first object shows the Seated Buddha on the Lion Throne Mathurā Region, India Kushan Dynasty, ca. 124 CE while the second picture shows Indra and Sūrya Vihara, Bhaja, India Shunga Dynasty, ca. mid 2nd c. BCE. The picture showing Buddha seated on the throne is a sculpture well curved using a red sand stone while the second object is a pigmented relief sculpture made from a volcanic stone. The evident contrast of the two objects is that they are constructed from two different stones hence differ in quality. The other similarity is that the two objects are a representation of culture. Both the first objects are an animation of the human race in the traditional leadership.
The second set of objects represents Four-ram Fangzun Royal Tomb Hunan, China Shang Dynasty, late 2nd millennium BCE and the Reliquary Buddhist Stupa Bimaran, Afghanistan (Ancient India) Kushan Dynasty, early 3rd c. CE. While the previous one is made of Piece-mold Cast Bronze the latter is from Hammered Gold and semi-precious stones. They therefore differ in terms of texture due to the material used. The two objects are both symbolic hence are animated. The third object is a Buddha inscribed in a contrasting background, it is as well sculpted from Chunar sandstone and it is a symbolic representation of the worship culture of the Indians. The fourth and last set of objects is the inlaid mirror from a Lineage Tomb while the other is a bowl from Banpo, near Xian in china. While the mirror is a Piece-mold cast bronze with hammered gold and silver, the latter is painted with red earthenware. The objects are both from china and they are symbolic of the East culture specifically India and China.
2. Relationship based on the comparison and contrast above
There is a common relationship that exist and is fueled further by the cultural similarities of the area where the objects are picked from which is India. The Indian culture is that which is integrated with mixed cultural symbols that extend to their places of worship and their gods. In fact, the Sun Dynasty or Solar Dynasty (Sūrya-vaṃśa) is one of the most prominent dynasties in the whole of the Middle East historically. The dynasties influenced the political makeup of a region. The Buddha seated on the lion throne originates from India from the collections of the Buddhism Sculptures and carvings. The objects influence the sociological set up by being a representation of the Buddhist religion. The objects are artistic pieces of work that are curved with style showing a sense of appeal, which is achieved using technical skills (Sullivan 96-9). Therefore, the objects represent any of the mentioned above aspects if not in one way then the other and this results into the existing relationship.
3. Significance of these relationships
The relationships are quite fundamental for the coexistence of the cultural setting based on the aspects of the Indian societal integration. The culture that made them adopts a common religion, which they worship through symbolic representations (Sullivan 76). The Chinese culture encourages counterfeiting which is not the case in India which sculpts their objects as shown.
Works Cited
Sullivan, Michael. Arts of China. California: University of California Press, 1984. Print. Read More
Share:
Tags
Cite this document
(“Indian Culture Essay Example | Topics and Well Written Essays - 500 words”, n.d.)
Indian Culture Essay Example | Topics and Well Written Essays - 500 words. Retrieved from https://studentshare.org/history/1608894-this-the-exam-please-see-the-quetion-and-answer-it-them

CHECK THESE SAMPLES OF Indian Culture

...? Natchez Indian Culture [Insert here] [Insert al affiliation] The Natchez Indians were amongst the last of the Native American populous to make a home on Mississippi’s southwestern borders. Their leaders (chiefs) are referred to as “Suns” with the primary chief called the “The Great Sun” whom rules over all villages, making all the decisions as he saw fit. Two great examples of the Natchez mounds are the Grand Village and the Emerald mound which are both historical landmarks today. Not relinquishing the fact that they are an indigenous tribe, the Natchez Indians share distinct similarities to the southeastern Indian tribes, such as being separated into...
7 Pages(1750 words)Research Paper

...?LOVE IN INDIAN CULTURE Module Module ID: The Paper: Love is a social phenomenon that exists in each and every culture of the world without discrimination of race, ethnicity, region, religion and socioeconomic status. In addition, love is not confined to the humans only; rather, insects, birds, animals and even beasts demonstrate their feelings of love particularly towards their young ones; it is therefore the domestic and wild animals including cows, elephants and deer etc shed tears at the eve of getting separated with their companions and young ones. The same is especially applied to humans, where love enjoys central place in their life and activities in general. There are multiple...
3 Pages(750 words)Research Paper

...? American Indian Culture Introduction The American Indian culture is one of the distinctive cultures in the worldthat deserves high level of preservation and enhancement. Preservation and promotion of the Native Americans culture is very important particularly for history purposes and therefore requires much attention. Many organizations have strived to preserve the Indian culture, laws and other vital issues such as encouraging public participation in politics and enhancing professionalism amongst the Native Americans. This article looks at the decline of the traditional Native American...
5 Pages(1250 words)Essay

...Indian culture Vs American culture "Indian culture provides an instructive contrast to American cultural patterns" (Jain Nemi: 89, 1996 As each of these cultures shows various assumptions, beliefs, values and practices, one can see various norms that overlap or contradict each other. While the Indian culture is strongly influenced by its age old thinking and wisdom of over 4000 years, the American culture is relatively new, fresh and appealing. The differences and similarities are thus seen to exist in various religions followed, social customs and the concept of...
8 Pages(2000 words)Essay

...of the query-and-search phenomenon, I come into a decision that indeed, there are a lot of determinants in order to know formation of culture and how they influence and drive others. TITLE TO BE MADE 2 For instance, a theory describes that India, somehow adopt some western culture perhaps in the field of arts as some of the ancient arts in India don't seem to have similarities but also a conflict rose up as some says that most of the Indian arts today do have ancient touch while some insist the uniqueness of the Indian arts. For instance, let us look into the TV and film industry of India, it is an established fact that I hold a name for it and...
6 Pages(1500 words)Book Report/Review

...First Topic September 25, Thesis ment: Dharma (righteousness/duty) leads to self-liberation. Bhagavad-Gita or Gita is a part of the great Indian epic, Mahabharata, and is regarded as the teachings to mankind from the Supreme Lord, Shree Krishna. The essence of Bhagavad-Gita is to guide mankind towards life fulfillment, starting from birth till the ultimate goal of man, i.e. attainment of self liberation. The Bhagavad-Gita is the supreme Holy Scripture in Hinduism, compiled in the form of a conversation between Lord Shree Krishna and his staunch disciple, Arjuna that occurred amidst the battle field just before the great war of Mahabharata. The cause for this narration is Arjuna’s confusion regarding his relationships,...
4 Pages(1000 words)Research Paper

...﻿Saudi and Indian Cultures and Background Saudis are citizens and people of the kingdom of Saudi Arabia while Indians are from India. There are many similarities as well as differences in their: traditions, religion, education and family setup, physical and social processes. India has a bigger population compared to Saudi Arabia. According to Hardy, due to its high population, India is more diverse than Saudi Arabia (65). India also has many religions as compared to Saudi Arabia which is highly dominated by the Islam. In addition, India consist many tribes that speak different languages unlike in the kingdom of Saudi Arabia. This report gives in details the major differences,...
4 Pages(1000 words)Assignment

The effect of Indian culture on McDonalds advertising

...Institute: Introduction India is a country of many culture and beliefs. There are many closely related value and social relationships which affects the consumption decisions any individual. Research has seen that the consumer behaviour of any individual is affected by national culture. There are many components of Indian culture Languages In any country language has an important role to play in consumer consumption pattern. India being a diverse in linguistic terms it has implications on the marketing strategy of the company. Through this dimension the company can reach out to the customers in a much better way. Like McDonald’s advertisement in Hindi which was made to...
10 Pages(2500 words)Research Paper

.... Establish Credibility: This practice is of course has been widely criticized and some reforms been sought but the practice still persists until today particularly in the rural area of India. V. Thesis: Arranged and early marriages in India have held its society together for ages. Body I. First main point as stated in preview: Arranged marriages are typical in India and the longest practice in marriage a. Supporting information for first main point: It is the very fabric that holds the Indian society together 1. Support detail of support for A: It support the socio-economic well-being of India 2. Second detail of support for A: as well as the historic and geographic significance of India (Stein) b. Supporting...
3 Pages(750 words)Essay
sponsored ads
Save Your Time for More Important Things
Let us write or edit the essay on your topic "Indian Culture" with a personal 20% discount.
GRAB THE BEST PAPER

Let us find you another Essay on topic Indian Culture for FREE!