Comments (0)
Add to wishlistDelete from wishlist
Cite this document
Summary
Timbuktu was founded by the Tuareg Imashagan in the 11th century. Because of its geographical location, which is situated uniquely, it was used as a meeting point for the Wangara, Songhai, Fulani, Tuareg and the Arabs…
Download full paperFile format: .doc, available for editing
HIDE THIS PAPERGRAB THE BEST PAPER92.8% of users find it useful 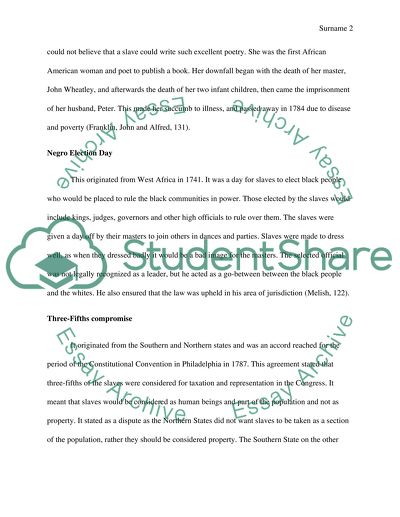 African American History Introduction Timbuktu It is a town in West Africa, in the western region of Mali. Timbuktu was founded by the Tuareg Imashagan in the 11th century. Because of its geographical location, which is situated uniquely, it was used as a meeting point for the Wangara, Songhai, Fulani, Tuareg and the Arabs. Timbuktu flourished from trade, which was between West Africa and North Africa. The main trade items were gold, salt, ivory and slaves. Slave trade flourished because of the existence of the Arabs. Timbuktu was brought under the French rule in 1893, up until Mali’s independence in 1960 (Franklin, John H, and Alfred, 68).
Phillis Wheatley
She was a victim of slave trade and was sold at the young age of 8 to the wealthy Wheatley family in Boston. The family gave her the name Phillis, and Wheatley was mandatory for her as a surname. They taught her how to read and write, and after seeing her talent in poetry, they encouraged her to pursue it. Many praised her work, amongst them white colonists who could not believe that a slave could write such excellent poetry. She was the first African American woman and poet to publish a book. Her downfall began with the death of her master, John Wheatley, and afterwards the death of her two infant children, then came the imprisonment of her husband, Peter. This made her succumb to illness, and passed away in 1784 due to disease and poverty (Franklin, John and Alfred, 131).
Negro Election Day
This originated from West Africa in 1741. It was a day for slaves to elect black people who would be placed to rule the black communities in power. Those elected by the slaves would include kings, judges, governors and other high officials to rule over them. The slaves were given a day off by their masters to join others in dances and parties. Slaves were made to dress well, as when they dressed badly it would be a bad image for the masters. The selected official was not legally recognized as a leader, but he acted as a go-between between the black people and the whites. He also ensured that the law was upheld in his area of jurisdiction (Melish, 122).
Three-Fifths compromise
It originated from the Southern and Northern states and was an accord reached for the period of the Constitutional Convention in Philadelphia in 1787. This agreement stated that three-fifths of the slaves were considered for taxation and representation in the Congress. It meant that slaves would be considered as human beings and part of the population and not as property. It stated as a dispute as the Northern States did not want slaves to be taken as a section of the population, rather they should be considered property. The Southern State on the other hand wanted slaves to be considered, and as such as an agreement was reached for three-fifths to be counted for taxation and representation (Melish, 134).
Works Cited
Franklin, John H, and Alfred A. Moss, From Slavery to Freedom: A History of African
Americans (McGraw-Hill, 9th edition,2010)
Melish, Joanne P, Disowning Slavery: Gradual Emancipation and “Race” in New England, 1780-
1860 (Ithaca, New York and London, England: Cornell University Press, 1998) Read More
Share:
Tags
Cite this document
(“African american history Essay Example | Topics and Well Written Essays - 250 words - 1”, n.d.)
African american history Essay Example | Topics and Well Written Essays - 250 words - 1. Retrieved from https://studentshare.org/history/1607606-african-american-history

The Consequences of Being King

...began. Rosa Sparks, a young black woman refused to give up her seat for a white person to sit in a bus and this had sparked controversy all over the United States around 1955. By chance, King’s Montgomery Church was chosen as the meeting venue to host one of the meetings to discuss the matter, and King happened to be there1. The meeting acted to recruit King into his call of advocating for the end to racial discrimination in the United States. Rosa Sparks was thrown into jail and King could not stomach the sense that she had been jailed for failing to give her seat to a white person. Following this, he planned his first public demonstration. In the same year, he mobilized the entire Montgomery [mainly African...
5 Pages(1250 words)Essay

...﻿African American History (1600-1877) OUTLINE The events that shaped African American history and converted the blacks from being slave to free people were forced transportation of black people for slave trade, American Revolution, the Great Awakening, the very famous war of 1812 and the civil war. Slave trade is the first incident that shows the deprivation of Black population of their basic human rights as blacks were transported to other lands for labour purposes. Second in line is the event of Great Awakening, which helped people to recognize their existence according to their religion, as Great Awakening resulted in...
11 Pages(2750 words)Research Paper
sponsored ads
Save Your Time for More Important Things
Let us write or edit the essay on your topic "African american history" with a personal 20% discount.
GRAB THE BEST PAPER

Let us find you another Essay on topic African american history for FREE!