Comments (0)
Add to wishlistDelete from wishlist
Cite this document
Summary
This essay describes gay and lesbian persecution in Germany, 1933-45.In the beginning of 1933 all organizations where gays and lesbians worked or associated with were banned and their scholarly and honorable books on homosexuality were burnt…
Download full paperFile format: .doc, available for editing
HIDE THIS PAPERGRAB THE BEST PAPER94.4% of users find it useful 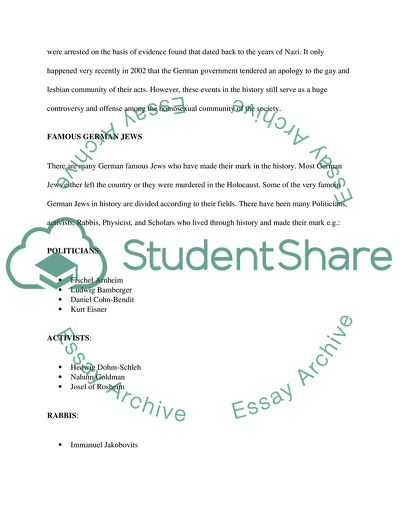 Extract of sample "Gay and Lesbian Persecution in Germany, 1933-45"

﻿Essay
As Adolf Hitler gained power in Nazi Germany he ordered persecutions of people having sexual orientation of gays and lesbians. These were the two groups that were targeted by the Nazis who and became the ultimate victims of the holocaust. In the beginning of 1933 all organizations where gays and lesbians worked or associated with were banned and their scholarly and honorable books on homosexuality were burnt. The homosexuals who were in the party were murdered as secret state police Gestapo worked to prepare a list homosexuals who were to be sentenced to death and were compelled to follow the “German norm” of sexual conformity.
Concentration camps were set up where a large number, as widely as 5,000 to 15,000 gay men were imprisoned during the holocaust. There are no records about how many men perished in those concentration camps and it is very hard to looks for an exact number of how many bore the cruel treatment (Grau, Claudia & Patrick 1995). They were not only punished by the German soldiers instead they also received persecutions from other prisoners, they were beaten to death. Homosexuals in forced labor camps were assigned grueling and blood curdling jobs on the sentence of “extermination through work” these individuals faced worst punishments than other Jewish inmates in the camps.
Estimates of 100,000 men and women homosexuals were arrested in the years between 1933 and 1945 out of which 50,000 were persecuted. Although it is hard to specify, how many of them perished in the concentration camps from hard labor and death sentences. After the end of war these persecutions and deaths were unacknowledged by many countries but later on some men were arrested on the basis of evidence found that dated back to the years of Nazi. It only happened very recently in 2002 that the German government tendered an apology to the gay and lesbian community of their acts. However, these events in the history still serve as a huge controversy and offense among the homosexual community of the society.
FAMOUS GERMAN JEWS
There are many German famous Jews who have made their mark in the history. Most German Jews either left the country or they were murdered in the Holocaust. Some of the very famous German Jews in history are divided according to their fields. There have been many Politicians, activists, Rabbis, Physicist, and Scholars who lived through history and made their mark e.g.:
POLITICIANS:
Fischel Arnheim
Ludwig Bamberger
Daniel Cohn-Bendit
Kurt Eisner
ACTIVISTS:
Hedwig Dohm-Schleh
Nahum Goldman
Josel of Rosheim
RABBIS:
Immanuel Jakobovits
PHYSICIST:
Albert Einstein
SCHOLARS:
Moses Buttenweiser
Immanuel Oscar Menahem Deutsch etc.
Works Cited
Grau, Günter, Claudia Schoppmann, and Patrick Camiller. Hidden Holocaust?: Gay and Lesbian Persecution in Germany, 1933-45. Chicago: Fitzroy Dearborn, 1995. Print. Read More
Share:
Tags
Cite this document
(“Gay and Lesbian Persecution in Germany, 1933-45 Essay”, n.d.)
Retrieved from https://studentshare.org/history/1606892-essay

CHECK THESE SAMPLES OF Gay and Lesbian Persecution in Germany, 1933-45

...Gay and Lesbian Rights The reorganization of gays and lesbians after WWII, as discussed in The Rise of a G&L Movement: the Homophiles Start Over came up against emerging forces that were not present before the war. One of this was the reactionary coalition that sought to weed out all un-American activities, which was seen, as necessary, to weed out communism. While homosexuality did not have anything to do with communism, the power of the US was related to gender with homosexuality being seen as a surrender of one’s masculinity (Adam 56). At around this time, there was already the feeling among the political reactionaries that homosexuality would destroy the American...
3 Pages(750 words)Assignment

...Challenges Confronting Children of Same Sex Parents Same-sex or lesbian and gay parenthood is a highly controversial issue with arguments for or against tending towards the emotional and moralistic as opposed to the objective and scientific. Stacey and Biblarz (2001) suggest as much in their assertion that the mainstream media's adoption of the same-sax parenthood debate has effectively led to unsupported conclusions, either for or against. The latter camp argues that the children of same-sex parents invariably experience normal and healthy psychological development, while the former camp argues the exact opposite (Stacey and Biblarz, 2001). Concurring with the aforementioned, Ahmann (1999) asserts...
5 Pages(1250 words)Essay

...Social Theory: Gidden's Theory of Structuration and Gay/Lesbian Marriage in the Europe and North America Social Theory Social theory helps not only to define a current social situation, but also to help explain the various views and concepts surrounding the issue. Contemporary society is full of debate and disagreement about hot topics. One of the many hot topics in contemporary society is that of gay/lesbian marriage. While here in the U.K. gay marriage has recently been accepted, it is still a matter of great debate throughout the world, and most especially in the United States. Why is this issue of such great debate While many issues focus on...
8 Pages(2000 words)Essay

...and hence, depression. This feeling of worthlessness and rejection is being faced by the gays and the lesbian population, as the society is yet to accept homosexuality as normal thing (Bringaze, Tammy and White 162). This has led to many homosexual people suffer from psychological disorders. Their psychological disorder is a result of both, the social attitude and their own negative perception of the self image. Hence, cognitive therapy, which aims to resolve the problem from roots, is one of the best therapy to use while counseling gays and lesbians. Cognitive therapy According to Beck and ...
15 Pages(3750 words)Essay

... 3. The report of the trial is in a collection of Miscellaneous Sheets in the British Library, shelfmark 515.l.2.(168), An Account of the Proceedings Against Capt. Edward Rigby, Old Bailey Sessions for 7 December 1698. 4. United States Holocaust Memorial Museum. Nazi Persecution of Homosexuals 1933-1945. retrieved February 11, 2010 http://www.ushmm.org/museum/exhibit/online/hsx/ 5. Where Gays Can Wed. Newsweek. retrieved February 11, 2010 http://www.newsweek.com/id/142307... Understanding the Change in Society’s Perspective on Homosexuality and How These Changes Affected My Point Of View on the Issue In the olden times, homosexuality used to be seen a social stigma and people were reluctant to admit that there are certain people who have...
2 Pages(500 words)Research Paper

The most notable discoveries in biology, medicine and pharmacy during the Golden Age

...Gay Lesbian Youth Gay Lesbian Youth Challenges Facing Adolescent Gays and Lesbians Gay and lesbian in their adolescence face similar developmental tasks as their peers who are heterosexual. They also have additional challenges that negatively affect their growth. They face challenges in developing identities as there are few role models of their sexual orientation in the society. The trend is, however, changing as there are new prospects for gays and lesbians that are promising. Despite such changes and progress, the group must still cope with cultures that are often...
2 Pages(500 words)Essay

5 Pages(1250 words)Research Proposal
sponsored ads
Save Your Time for More Important Things
Let us write or edit the essay on your topic "Gay and Lesbian Persecution in Germany, 1933-45" with a personal 20% discount.
GRAB THE BEST PAPER

Let us find you another Essay on topic Gay and Lesbian Persecution in Germany, 1933-45 for FREE!