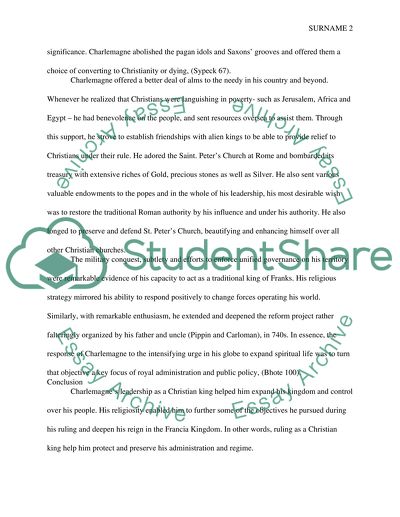 Extract of sample "Charlemagne as a Christian king"

Introduction Charlemagne was the France monarch (768-814), and the Western leader 800-815. Charlemagne invented the Roman Empire, intensified political and economic life in Europe, and promoted cultural revival called the Carolingian Renaissance.
Discussion
In comparison to the overall deterioration of Western Europe since the 7th century, the age of Charlemagne characterizes a critical renewal and turning point. Similarly, through King Charlemagne use of accessible resources (like Irish evangelists, the church and feudal as well as manorial institutions), his collaboration with the papacy and various ecclesiastical and administrative reforms, he managed to stop the cultural and political collapse of the early, Middle periods and establish a basis for extensive central administration north of the Alps, (Barbero 34).
Charlemagne was a prominent military conqueror, and he directed his talent into the church service, for in winning some of the Western Europe and some parts of east, he utilized military forces to coerce all his subjects to turn to Christianity. In addition, he supported various, subtle missionary attempts and motivated the expansion of Benedict monasteries mostly the duplication of theological manuscripts. Charlemagne’s religiosity made him visualize himself as having a spiritual responsibility to establish the kingdom of God on the earth, but he used brutal, intrigue and extreme hostility to the latter. He invested all his crucial campaigns with religious significance. Charlemagne abolished the pagan idols and Saxons’ grooves and offered them a choice of converting to Christianity or dying, (Sypeck 67).
Charlemagne offered a better deal of alms to the needy in his country and beyond. Whenever he realized that Christians were languishing in poverty- such as Jerusalem, Africa and Egypt – he had benevolence on the people, and sent resources oversea to assist them. Through this support, he strove to establish friendships with alien kings to be able to provide relief to Christians under their rule. He adored the Saint. Peter’s Church at Rome and bombarded its treasury with extensive riches of Gold, precious stones as well as Silver. He also sent various valuable endowments to the popes and in the whole of his leadership, his most desirable wish was to restore the traditional Roman authority by his influence and under his authority. He also longed to preserve and defend St. Peter’s Church, beautifying and enhancing himself over all other Christian churches.
The military conquest, subtlety and efforts to enforce unified governance on his territory were remarkable evidence of his capacity to act as a traditional king of Franks. His religious strategy mirrored his ability to respond positively to change forces operating his world. Similarly, with remarkable enthusiasm, he extended and deepened the reform project rather falteringly organized by his father and uncle (Pippin and Carloman), in 740s. In essence, the response of Charlemagne to the intensifying urge in his globe to expand spiritual life was to turn that objective a key focus of royal administration and public policy, (Bhote 100).
Conclusion
Charlemagne’s leadership as a Christian king helped him expand his kingdom and control over his people. His religiosity enabled him to further some of the objectives he pursued during his ruling and deepen his reign in the Francia Kingdom. In other words, ruling as a Christian king help him protect and preserve his administration and regime.
Works cited
Barbero, Alessandro. Charlemagne: Father of a Continent. Berkeley: University of California Press, 2004. Print.
Bhote, Tehmina. Charlemagne: The Life and Times of an Early Medieval Emperor. New York: Rosen Pub. Group, 2005. Print.
Sypeck, Jeff. The Holy Roman Empire and Charlemagne in World History. Berkeley Heights, N.J: Enslow Publishers, 2002. Print. Read More
Share:
Tags
Cite this document
(“Charlemagne as a Christian king Essay Example | Topics and Well Written Essays - 500 words”, n.d.)
Charlemagne as a Christian king Essay Example | Topics and Well Written Essays - 500 words. Retrieved from https://studentshare.org/history/1605737-charlemagne-as-a-christian-king

CHECK THESE SAMPLES OF Charlemagne as a Christian king

...﻿Charlemagne: Capitulary for Saxony 775-790 The Capitulary for Saxony 775-590 was an ecclesiastical and civil ordinance written by Charlemagne for the people of Saxony after he conquered them. The Saxons were people of northern Europe, primarily associated with the early tribes of Germany. They were a pagan people who worshipped nature and had beliefs regarding the sacrifice of humans to their pagan gods and spirits. They were a very stubborn people who did not easily accept new traditions or rational thinking. The initial belief was that Rome had enlisted Charlemagne’s assistance in forcibly converting the Saxons as well as the Angles, people from the northern coast, to...
4 Pages(1000 words)Essay

... to settle for anything less than brotherhood, I beg God to forgive me. I hope this letter finds you strong in the faith. I also hope that circumstances will soon make it possible for me to meet each of you, not as an integrationist or a civil-rights leader but as a fellow clergyman and a Christian brother. Let us all hope that the dark clouds of racial prejudice will soon pass away and the deep fog of misunderstanding will be lifted from our fear drenched communities, and in some not too distant tomorrow the radiant stars of love and brotherhood will shine over our great nation with all their scintillating beauty. Yours for the cause of Peace and Brotherhood, Martin Luther King, Jr. Published in: King, Martin Luther Jr. ... Martin Luther...
3 Pages(750 words)Essay

...? Christian Copts Coptic Christianity had its beginnings in Egypt about 50 years following the death of Christ (50 AD). It is believed to be the first Christian sect outside present day Israel, the Holy Land. From the earliest days, Coptic Christians have been an oppressed minority subject to violence and subjugation by the dominant group. 2000 years ago it was the Roman Empire then the Byzantine Empire who repressed the Copts and for the past 1500 years the Sunni Muslim majority has relegated them to second-class citizen status. Recently, following multiple regime changes in Egypt, Copts have endured increased instances of violence. The history of Coptic...
5 Pages(1250 words)Research Paper

...and natural form the structure of the door of the church of Santa Sabina represents a transcultural and transhistorical phenomenon. The narrative intensifies life, because if we see the relief through the Judeo-Christian traditions the scene of calling, or the vocation demonstrates the special relationship between God and the nation of Israel. That is why this narrative is closely linked with the Book of Exodus 3, where human and superhuman (an angel) meet. The angel summons the human to carry out a task that exceeds his abilities, but which he accepts to perform. Kemp comments that both in the Book of Exodus as well as in the relief, these elements are methodically arranged. Moses is pasturing the flocks, afterwards...
4 Pages(1000 words)Book Report/Review

...01 February 2008 The Life of Charlemagne Charlemagne is a very popular historical figure whose life hasbeen greatly romanticized with him depicted as both saint and hero. This article is based on the account of Einhard who is described as his friend and employed as a court historian amidst his lack of talent. Owing to his personal relationship with Charlemagne and his position as a courtier, Einhard is one reliable and credible source having witnessed the life of the ruler firsthand. Being humble, he admitted his lack of capacity in writing noting his lack of proficiency in Latin. However, in the bibliography that he has written he clearly chose to give in to the "lust of immortality to...
3 Pages(750 words)Essay

...281377 Reflecting on the three scholars you have studied which one do you think put forward the more compelling argument In his article David Watt argues that although Jesus Christ was frequently described as the Light of the World he was in actual fact scripture unenlightened. Watt backs up his opinion by contending that the Christian gospels themselves did not have any doubts at all about the literal accuracy and the incontrovertible truth of the Old Testament alongside its prophets. The basic contention made by Watt is that Jesus Christ was right because they had accurately predicted his life as well as his mission. According to Watt Jesus Christ himself argued that the gospels have to be literally true, and that everybody... or not it...
4 Pages(1000 words)Essay

The Tale of the Greatest Divine King

...our armies with your hands lifted up to Gold like Moses, so that, by your intercession and by the leadership and gift of God, the Christian people may everywhere and always have victory over the enemies of his holy name and that the name of our Lord Jesus Christ may be glorified throughout the world” (Logan, 2002, 73). Through this letter, written by Charlemagne himself, it is logical to assume about his motive in forging alliance and good relationship with the church. Here is an idea of a perfect Christian society, to whose security and prosperity both king and pope were tied together in a joint effort. II. Charlemagne and the Papacy Four years...
10 Pages(2500 words)Essay

...Christian Education 26th November 2009 I. Introduction: In an age of secularism and emphasis on materialism, there is an urgent need to form the minds of young people in the way of God - “teach them the way they should go, so that when they grow up they would not depart from it”1 Like traditional education, which focuses more on enriching the child intellectually to meet the demands of the real world, Christian Education achieves the same objective, but goes beyond the former to equip the child with the requisite knowledge of God to help live triumphantly in the secular world. . “Christian Education is the learning process that leads people to learn how to live according to the will of God, showing and practicing the love for God... and...
8 Pages(2000 words)Research Paper

...be, in part, true and can really happen. For example, Christians believe in monogamy but Muslims’ marriage and family tradition is polygamous. The Christians belief is based upon what they believe is true and that is the Christian concept of a monogamous relationship or marriage. Christians believe that this is the correct partner and relationship practice because they believe in the teachings from the Bible. Muslims, on the other hand, also has different literature and context about marriage and family. What may be right for the Muslims, like in the example above, contradicts the beliefs of the Christians. And in this part of moral relativism, I agree....
6 Pages(1500 words)Essay

...Christian Philosophy: Healthcare. In the Bible there is a general expectation that faith in God (in the Old Testament) and in Jesus (in the New Testament) should have a transforming effect on a person’s life which in turn offers believers and unbelievers alike a demonstration of divine love at work on earth. From the Church’s beginnings until modern times care of the poor and the sick has been one of the main duties of Christians, and indeed it was one of the first tasks that Jesus gave to his disciples.1 There have been through the ages many different approaches to this aspect of Christian faith, and this paper will consider just two famous thinkers who made health care one of their top priorities: the medieval scholar and abbess... ...
12 Pages(3000 words)Research Paper
sponsored ads
Save Your Time for More Important Things
Let us write or edit the essay on your topic "Charlemagne as a Christian king" with a personal 20% discount.
GRAB THE BEST PAPER

Let us find you another Essay on topic Charlemagne as a Christian king for FREE!