Comments (0)
Add to wishlistDelete from wishlist
Cite this document
Summary
It is a series of events and long time process since the Spanish-American war until the eve of the Second World War. One of the great wars that the Americans were involved in was the…
Download full paperFile format: .doc, available for editing
HIDE THIS PAPERGRAB THE BEST PAPER95.3% of users find it useful 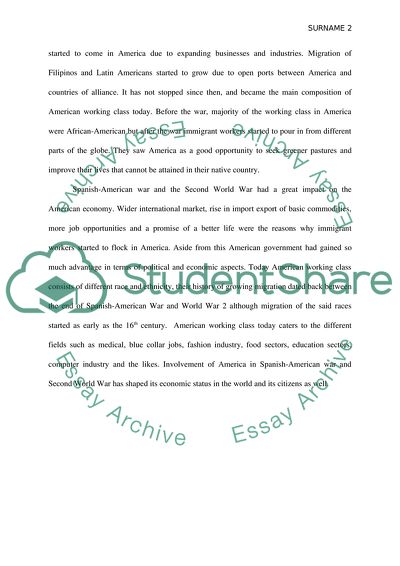 Evolution of American Working After the Spanish-American War until the Eve of Second World War American had joined different wars in the history that helped evolve its working class today. It is a series of events and long time process since the Spanish-American war until the eve of the Second World War. One of the great wars that the Americans were involved in was the Spanish American and World War II. These wars shaped the American history and the history of the people. Today, American working class is composed not only white and blacks but hundreds of races and ethnicity found all over the world, thus, considered as the melting pot of human resources.
In Spanish-American war, Cuba and Philippines were involved because these countries were the colonies of the Spain. American government helped fight the wars of these two countries against their colonizer which led to their victories. Having won the wars against Spain, America gained control over these countries and expanded its interest from Latin America to the Pacific. American economic interest also grew due to newfound alliance with the countries involved. It also opened doors for the Americans to trade with the other nations adjacent to these countries which mean free market and free taxes for the American capitalists and wider international markets. American economy soared high because of these reasons and American capitalist started looking for cheap workers for their growing businesses. Import and export businesses of basic commodities such as spices, wheat corn, cotton and other basic needs began to grow. After the war, middle class or working class started to come in America due to expanding businesses and industries. Migration of Filipinos and Latin Americans started to grow due to open ports between America and countries of alliance. It has not stopped since then, and became the main composition of American working class today. Before the war, majority of the working class in America were African-American but after the war immigrant workers started to pour in from different parts of the globe. They saw America as a good opportunity to seek greener pastures and improve their lives that cannot be attained in their native country.
Spanish-American war and the Second World War had a great impact on the American economy. Wider international market, rise in import export of basic commodities, more job opportunities and a promise of a better life were the reasons why immigrant workers started to flock in America. Aside from this American government had gained so much advantage in terms of political and economic aspects. Today American working class consists of different race and ethnicity, their history of growing migration dated back between the end of Spanish-American War and World War 2 although migration of the said races started as early as the 16th century. American working class today caters to the different fields such as medical, blue collar jobs, fashion industry, food sectors, education sectors, computer industry and the likes. Involvement of America in Spanish-American war and Second World War has shaped its economic status in the world and its citizens as well.
Work Cited
Duiker W.J. and Spielvogel J.J., World History. Cengage Learning (2012). Print
Horrowitz I L. The American Working Class: Prospects for the 1980s. Transaction
Publishers (1980). Print
Norton M. B., Sheriff C., Katzman D. M. Blight D. W., Chudacoff H. A People and a
Nation: A History of the United States, Volume II. 9th ed. Cengage Learning (2012).Print.
Tucker S. C. The Encyclopedia of the Spanish-American and Philippine-American
Wars: A Political, Social, and Military History. ABC CLIO ( 2009). Print
Roediger D. R. The Wages of Whiteness. Verso (2007). Print
Roosevelt Forms 3 Divisions. The New York Times. 7 May 1935. Pdf Read More
Share:
Tags
Cite this document
(“Role that race and ethnicity played in the evolution of the American Essay”, n.d.)
Role that race and ethnicity played in the evolution of the American Essay. Retrieved from https://studentshare.org/history/1596058-role-that-race-and-ethnicity-played-in-the-evolution-of-the-american-working-class-from-the-spanish-american-war-to-the-eve-of-the-second-world-war

“Role That Race and Ethnicity Played in the Evolution of the American Essay”, n.d. https://studentshare.org/history/1596058-role-that-race-and-ethnicity-played-in-the-evolution-of-the-american-working-class-from-the-spanish-american-war-to-the-eve-of-the-second-world-war.
Comments (0)
Click to create a comment or rate a document

...imperial possessions, and thus, the world. After four months of fighting in those fronts, and numerous defeats at the hands of the American fleet and soldiers, Spain pressed for a diplomatic end to the conflict. With the signing of The Treaty of Paris on December 10, 1898, the war was over (Trask,445) . America gained almost all of Spain’s colonial entities, including Guam, Puerto Rico, and the Philippines (which led to the Philippine-American War a few months later) (Dolan, 102). The U.S. had jurisdiction over Cuba, and allowed Cuba to form its own government, supported by the U.S. Government (the U.S. Executed a perpetual lease for Guantanamo Bay,...
3 Pages(750 words)Research Paper

...Prof’s American Memory of the Second World War Versus American’s Experience of the Second World War The Second WorldWar will always hold a special, spectral, horrible but proud place in American memory. We like to understand it as a brave effort by our nation to help people who were unable to help themselves, to stand up against the horrible slaying of Jews on a massive scale, and to protect the ideal that a country could not simply invade and conquer other countries unilaterally without facing some kind of recompense. And, though many aspects of this memory are true,...
3 Pages(750 words)Essay

..., that was not only economically stable, but also technologically strong. Likewise, underestimation of the power of the US by the Empire of Japan led to the defeat of the Japanese at the Battle of the Midway. The US played a central role in the Second World War and was the prime provider of moral and technological support to the Allies, which became a fundamental contributing factor of their success in the war. Consequences of the Second World War In the Second World War, Germany completely got defeated. The end of the...
6 Pages(1500 words)Essay

...﻿Spanish and American War The Spanish-American war occurred in 1898 as a result of American interference in the unending Cuban War of Independence. Cuba was involved in conflicts and was ruled by the Spanish for decades, which was closely observed by the US. It was the explosion of USS Marine in the Havana Harbor that provoked the Americans against the Spanish. President McKinley’s administration was under pressure to declare war, which he eventually did in spite of his reluctance. When any kind of compromise seemed futile and Spain...
7 Pages(1750 words)Research Paper

...strength over the years since the Spanish-American War of 1898. Another intriguing consideration to come out of this war included how the presidency would work with the different governments as it set policy to work with those other governments. This required the creation of policies that were facilitated at the beginning with President McKinley and then with President Theodore Roosevelt upon McKinley's death. We tend not to realize that President McKinley started the process with the policies that provided the framework for our first becoming a world power and then acting upon that stature. Most of the time it is the...
6 Pages(1500 words)Essay

...in the victory for USA. In words of Sampson, the absence of Spanish preparedness was a mystery.(1) Conclusion The Spanish-American war raised the position of USA in the eyes of international powers as Europeans saw it attaining the status of world power. However, it presented a clash between reality and myth, with respect to the American way of thinking about issues involving foreign policy matters. Footnotes: (1) W.T. Sampson, “The Atlantic Fleet in Spanish War”, Century Magazine 1899, 904 BIBLIOGRAPHY WORKS-CITED and Sources Used Paterson G Thomas, “United States Intervention in Cuba,...
5 Pages(1250 words)Research Paper

...The Just War Theory s that war may only be used when there is a clear and present danger with a legitimate cause. The most vital legitimate causes are dangers to human rights along with the quality of human lives. The right of self-defense plays a key role within the Just War Theory. The Korean War was the first historical event where one nation intervened to protect another nation’s rights. Although some critics debate whether the Korean War was justified, the Just War Theory applies quite clearly. North Korea invaded South Korea and violated the United Nations’ Charter. The people of South Korea were...
1 Pages(250 words)Essay

...Conference to “settle the war and divide the spoils” (110). Wilson was keen that “American influence should play a predominant role in shaping the peace” (110) and that his idealistic Fourteen Points should form the basis of the peace accord. However, Wilson’s Fourteen Points, and his call for national self-determination, were rejected by the other Allied leaders, who debated America’s right to shape the peace settlement. Wilson was forced to compromise on his Fourteen Points, but succeeded in retaining the formation of the League of Nations to secure "mutual guarantees of political independence and territorial integrity to great and small nations alike." Ironically,...
2 Pages(500 words)Admission/Application Essay
sponsored ads
Save Your Time for More Important Things
Let us write or edit the essay on your topic "Role that race and ethnicity played in the evolution of the American working class from the Spanish-American War to the eve of the Second World War" with a personal 20% discount.
GRAB THE BEST PAPER

Let us find you another Essay on topic Role that race and ethnicity played in the evolution of the American working class from the Spanish-American War to the eve of the Second World War for FREE!