Comments (0)
Add to wishlistDelete from wishlist
Cite this document
Summary
It might also culminate from the fact that one lacks a resting place or a place to act as his source of shelter. Homes provide many services to people. They protect people from the dangers of the public,…
Download full paperFile format: .doc, available for editing
HIDE THIS PAPERGRAB THE BEST PAPER94.5% of users find it useful 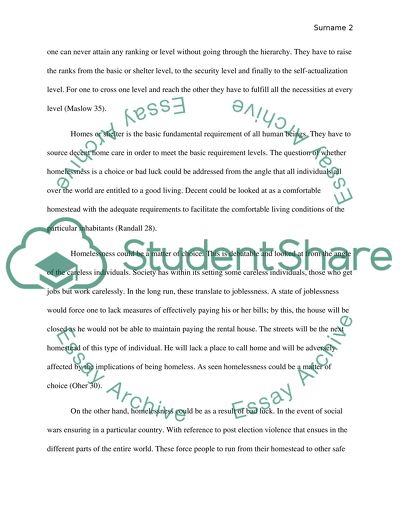 Extract of sample "Homelessness: a choice or bad luck"

Homelessness: A choice or Bad Luck Homelessness is defined as the act of not having a place to call home. It might also culminate from the fact that one lacks a resting place or a place to act as his source of shelter. Homes provide many services to people. They protect people from the dangers of the public, issues to do with bad weather conditions and the flesh eating animals, they provide adequate heat for everyone to be able to execute their daily activities well; they act as a resting place after the day’s activities and finally act as the jurisdiction where your children get to grow from. Homes are therefore a basic necessity. According to Abraham Maslow’s on the hierarchy of needs, the home or shelter is a basic necessity for every individual. It is on this basis that no one is supposed to be homeless (Stearman 23).
People should place more emphasize on sourcing and accessing decent homecare or decent living. According to Abraham Maslow’s Hierarchy of needs, human needs are endless; they are limitless and are recurring in nature. Human beings are never satisfied at the level of need they are in, they aim at rising the ranks from merely attaining the basic need level, to attaining the self-actualization level. Human beings feel more important, they value themselves, they feel more actualized when they reach the level of self-actualization. He further argued that one can never attain any ranking or level without going through the hierarchy. They have to raise the ranks from the basic or shelter level, to the security level and finally to the self-actualization level. For one to cross one level and reach the other they have to fulfill all the necessities at every level (Maslow 35).
Homes or shelter is the basic fundamental requirement of all human beings. They have to source decent home care in order to meet the basic requirement levels. The question of whether homelessness is a choice or bad luck could be addressed from the angle that all individuals all over the world are entitled to a good living. Decent could be looked at as a comfortable homestead with the adequate requirements to facilitate the comfortable living conditions of the particular inhabitants (Randall 28).
Homelessness could be a matter of choice. This is debatable and looked at from the angle of the careless individuals. Society has within its setting some careless individuals, those who get jobs but work carelessly. In the long run, these translate to joblessness. A state of joblessness would force one to lack measures of effectively paying his or her bills; by this, the house will be closed as he would not be able to maintain paying the rental house. The streets will be the next homestead of this type of individual. He will lack a place to call home and will be adversely affected by the implications of being homeless. As seen homelessness could be a matter of choice (Oher 30).
On the other hand, homelessness could be as a result of bad luck. In the event of social wars ensuring in a particular country. With reference to post election violence that ensues in the different parts of the entire world. These force people to run from their homestead to other safe regions to protect their lives. Instances of the region being affected by a wide spread disease might force people to run away from the surrounding, instances of the land flooding and killing people might force people to migrate and move out of their homesteads in search of new homes. By moving out and looking at the circumstances that force people to move out, people end up being homeless. Looking at the facts homelessness arises as a matter of bad luck (Stearman 45).
Nobody should be homeless, but according to the analysis, it is clear that the state of homelessness, results from either one choosing to be homeless or through bad luck. No matter the case, everybody should be entitled to a decent living.
Works Cited:
Randall Amster,. Lost in space: the criminalization, globalization, and urban ecology of homelessness. New York: LFB Scholarly Publishing, 2008. Print.
Maslow, Abraham H., and Robert, Frager. Motivation and personality. 3rd ed. New York: Harper and Row, 1987. Print.
Oher, Michael, and Don, Yaeger. I beat the odds: from homelessness, to the blind side, and beyond. New York: Gotham Books, 2011. Print.
Stearman, Kaye. Homelessness. Austin, Tex.: Raintree Steck-Vaughn, 1999. Print. Top of Form
Bottom of Form Read More
Share:
Tags
Cite this document
(“Homelessness: a choice or bad luck Essay Example | Topics and Well Written Essays - 500 words”, n.d.)
Retrieved from https://studentshare.org/history/1595146-homelessness-a-choice-or-bad-luck

CHECK THESE SAMPLES OF Homelessness: a choice or bad luck

...the housing but also the support system should be capable enough to keep them in a better position in their homes even if it is temporary. With the housing facilities, it is possible that the further homelessness can be averted and the number of people who seek public shelters can be minimized (Martha, 2001). Conclusion: This is a fact that a huge number of people are getting homeless each day. This is not only having bad impacts on the overall image of the society but it also shows the declining life standards of the people which is very threatening for the progress of a particular society. Homelessness is also badly affecting the overall social fabric. Environment is...
6 Pages(1500 words)Essay

...Homelessness Introduction Sociology is the study of human culture, communal group and communal interactions of people of different ethnicities, races and religions (Taylor 22). As people interact, they happen to share some common values and behaviours. This interaction may lead to disagreement due to diverse perceptions on how to attend things and when they should be done among others. These disagreements led to the introduction of theories, which try to elucidate why people in a certain society may be in a state of conflict. Some of them are: Symbolic Interaction theory Symbolic interaction theory can be termed as micro-sociology since it reflects the direct (face-to-face) interaction in the society (Andersen and Taylor...
7 Pages(1750 words)Research Paper

...Homelessness as a Social Problem Homelessness is a social problem which is associated with numerous social problems. The challenges that the homeless people face in the society are mostly caused by illnesses due to poor housing facilities or coldness and overcrowding. Reports indicate that contagious and respiratory diseases have been rampant among the homeless people. Moreover, due to poor living conditions, homeless people suffer from other types of diseases caused by poor hygiene. Homelessness as a problem is however not a naturally occurring phenomenon. Although poverty has been cited as the major cause of...
5 Pages(1250 words)Research Paper

...are in such situations through other means than their own fault. This is achievable through the strengthened duties the local councils owe homeless persons by the removal of some strict restrictions in the procedures of acquiring council assistance (UoY 2007). The councils are also given more authority by the Act to give assistance even to those who do not meet the criteria for priority need. Such provisions were framed with an acknowledgment of the need for the integration of policies on allocating housing and combating homelessness, and were summarized in the Housing Green Paper, chapter nine, under “Quality and Choice” (Wilson 2013). The legislation prioritises the fight against rough...
4 Pages(1000 words)Essay

The Residual System in the US

...homeless is a very traumatic event for these kids, both emotionally and psychologically. It is obviously not easy for everyone but its bad effects on family relationships affects children the most in terms of a lost sense of security. The loss of a cherished home can be compounded by difficulty in getting adequate food on the table by parents who are out looking for work and may come home empty handed. The American social welfare system is now being increasingly seen as an acceptable alternative to going hungry and no longer with the stigma of being a charity or a doleout intended only for the dregs of society. Many respectable middle-class families have found out they had slid downwards on the poverty...
7 Pages(1750 words)Essay

...Homelessness Contents Introduction 3 The issue and causes behind it 3 Consequence of homelessness 4 Homelessness and Functionalism 7 Remedy 8 Works Cited 10 Introduction The idea of homelessness is not an effortlessly characterized term. While the normal individual comprehends the essential thought of vagrancy, analysts in the sociological field have connected conflicting definitions to the idea of homelessness, justifiably so as the thought includes a measurement more exhaustive than a peculiar meaning of a single person without living arrangement. Homelessness embodies a continuum running from the nonappearance of a changeless safe...
7 Pages(1750 words)Research Paper

...Problem at hand: The increasing visibility of the vagrants is negative impact on outlook of the community and thereby distracting the investors and overall process of attracting tourists. The homelessness and revenues with regard to the tourists can be understood and undertaken in a demand and supply relationship between the two components at either end. The situation at hand can be resolved and undertaken by implementing business model and theory to evaluate the exact nature of the problem at hand. Maslow theory of hierarchy and needs determination reflects the overall outlook of the given society. The elements understanding such as the security versus insecurity felt as the amount of vagrants increase in the society. Similarly...
1 Pages(250 words)Essay

...Homelessness Homelessness Homelessness is a concept that is not quite easily understood. Springer (2000) argued that while an average person can perceive the concept in terms of vagrancy, the sociological perspective is quite complex. A more general description of homelessness could entail many issues ranging from the absence of a permanent residence to poor living arrangements and housing conditions. This paper focuses on various homelessness issues including the scope of the problem and solutions to the problem. In addition, the paper looks at the problem from a theoretical sociological perspective. Scope of the Problem Homelessness is...
5 Pages(1250 words)Research Paper
sponsored ads
Save Your Time for More Important Things
Let us write or edit the essay on your topic "Homelessness: a choice or bad luck" with a personal 20% discount.
GRAB THE BEST PAPER

Let us find you another Essay on topic Homelessness: a choice or bad luck for FREE!