Comments (0)
Add to wishlistDelete from wishlist
Cite this document
Summary
The era was characterized Romanticism movement, which marked a reaction in art, literature, philosophy, politics and religion from the formal orthodoxy and…
Download full paperFile format: .doc, available for editing
HIDE THIS PAPERGRAB THE BEST PAPER94.4% of users find it useful 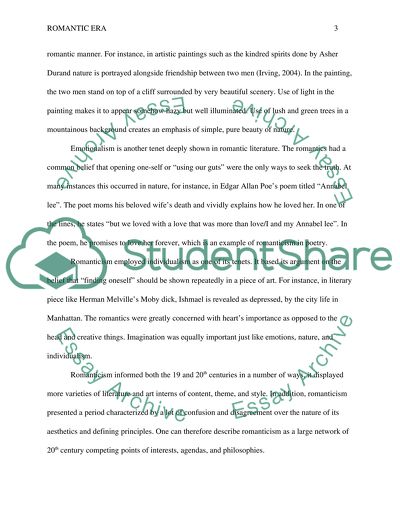 College The term “romantic era” is often used when referring to the period towards the end of 18th century in Europe. The era was characterized Romanticism movement, which marked a reaction in art, literature, philosophy, politics and religion from the formal orthodoxy and neoclassicism found in the preceding period (Steven, 2000). The movement arose in a gradual manner, had many phases, and was partly a reaction to the industrial revolution. Some scholars argue that it was a revolt against the aristocratic political and social norms of the enlightenment age and a form of reaction against nature’s scientific rationalization.
A number of European society’s aspects transformed the romantic era in different ways. For instance, in romantics “nature” meant many things. It was perceived as a source of image and subject, as healing power, as an artificial form of civilization (Geoffrey, 2004). Romanticism gave a lot of emphasis in accurate description of natural phenomena and capturing of “sensuous nuance” which was a true representation of romantic landscape.
Other aspects of European society that transformed the romantic era included symbolism and myth. Symbols borrowed from the European society in romanticism were viewed as human artistic correlatives of emblematic language in nature (Hye-Kyung, 2005). They were given a lot of value and attention, since they could suggest many things simultaneously. One can say that the myths were partly used because of the desire to communicate “inexpressible” by use of the readily available language resources. During this period, people’s love for nature and imagination had prospered, flourished and skyrocketed.
The main tenets of romanticism included individualism, emotionalism, and nature. These three main qualities are visible repeatedly in a number of very important and lasting artists, authors, musicians, and so forth. In romantic art and literature, nature was portrayed in a romantic manner. For instance, in artistic paintings such as the kindred spirits done by Asher Durand nature is portrayed alongside friendship between two men (Irving, 2004). In the painting, the two men stand on top of a cliff surrounded by very beautiful scenery. Use of light in the painting makes it to appear somehow hazy but well illuminated. Use of lush and green trees in a mountainous background creates an emphasis of simple, pure beauty of nature.
Emotionalism is another tenet deeply shown in romantic literature. The romantics had a common belief that opening one-self or “using our guts” were the only ways to seek the truth. At many instances this occurred in nature, for instance, in Edgar Allan Poe’s poem titled “Annabel lee”. The poet morns his beloved wife’s death and vividly explains how he loved her. In one of the lines, he states “but we loved with a love that was more than love/I and my Annabel lee”. In the poem, he promises to love her forever, which is an example of romanticism in poetry.
Romanticism employed individualism as one of its tenets. It based its argument on the belief that “finding oneself” should be shown repeatedly in a piece of art. For instance, in literary piece like Herman Melville’s Moby dick, Ishmael is revealed as depressed, by the city life in Manhattan. The romantics were greatly concerned with heart’s importance as opposed to the head and creative things. Imagination was equally important just like emotions, nature, and individualism.
Romanticism informed both the 19 and 20th centuries in a number of ways, it displayed more varieties of literature and art interns of content, theme, and style. In addition, romanticism presented a period characterized by a lot of confusion and disagreement over the nature of its aesthetics and defining principles. One can therefore describe romanticism as a large network of 20th century competing points of interests, agendas, and philosophies.
References
Geoffrey, A. G.(2004).Survey of American literature.Basic concepts:Romantic individualism
1.Retrived from http://www.distancelearningassociates.com/eng2327/BC
Individualism.html.
Hye-Kyung,L.A.(2005). When arts met marketing: Arts marketing theory embedded in
romanticism. International journal of cultural policy,11(3).Retrieved from
http://www.theartofconsulting.org/sites/default/files/the%20down%20side%20of%20Art
%20Marketing.pdf.
Irving, W.B.(2004).American Romanticism.The early romantics 1.Retrived from
http://www.bk.org/UserFiles/File/Bobbie%20Shea/Early%20Romanticism.pdf
Merriman,C. D. (2003).The literature network.Romanticism 1.Retrived from http://www.online
literature.com/periods/romanticism.php.
Steven, K.S(2000).Lectures on modern European intellectual history.Towards a definition of
romanticism 1.Retrived from http://www.historyguide.org/intellect/romanticism.html Read More
Share:
Tags
Cite this document
(“Romantic Era Essay Example | Topics and Well Written Essays - 500 words”, n.d.)
Romantic Era Essay Example | Topics and Well Written Essays - 500 words. Retrieved from https://studentshare.org/history/1593851-romantic-era

CHECK THESE SAMPLES OF Romantic Era

...and Number of the Teacher’s THE ROMANTIC ERA: WORDSWORTH AND COLERIDGE COMPARISON/ CONTRAST Introduction The usually distinctive domains of poetics and religion are integrated in the work of both William Wordsworth and Samuel Taylor Coleridge. The romantic poetry of both poets incorporates theological concern through a meditative focus on the nature of imagination. According to Barth (p.1), imagination is the “faculty that allows the human person, whether instinctively or consciously to shape the world into meaning, much as in the beginning God shaped chaos into cosmos”. Wordsworth believed that poetry was the outcome of “the spontaneous overflow of feelings” (Abrams 8), originating from...
3 Pages(750 words)Research Paper

... Music 28 November John Lennon: Romantic Era John Lenon was widely recognized as the best lyricist. Since he was the master of expressing feelings in to words, he would best fit in to the romantic era. John had the potential to develop an inner gaze along with egotism, subjectivity and withdrawal (Urish and Bielen, 2007). This style is defined through self-analysis, a searching inwardness of imagination as well as a convergence of authority from the legalities and forms of the external world to the spiritual-power, self-consciousness and private-will of the inner world. Romantics are cultivated from the private experiences of the writer and so they are not only intensely personal but also extremely bio-graphical element. Therefore... of...
3 Pages(750 words)Research Paper

Romanticism (or the Romantic era/Period)

...? Romanticism Romanticism, also known as the Romantic Era first originated in Europe at the end of the 18th century, being at a special high between the years 1800 and 1850. This was a movement which encouraged the production of arts, music, literature and even intellects. This era started partially as a rebuttal to not only the Industrial Revolution, but also the Age of Enlightenment. The result being that this led to quite a great impact on education, science and even historiography as well as politics. The Enlightenment Era, also the Age of Reason was a movement carried on during the 17th and the 18th centuries in Europe and then in other places. The people were...
8 Pages(2000 words)Assignment

...? Reasons behind Wordsworth’s “nightmarish” depiction in London The first time the poet went to London, he met cool weather and a good atmosphere, which was conducive for the residents. The environment was well watered and it seemed to be a well blessed land. This is so because of the outpour of rains that showered every corner of the city. The poet describes the changing weather, which was backed with a prolonged drought that changed the atmosphere of the city of London. The stream that was once flowing gloriously with clean water gradually dried up and the situation worsened until there was no more water in the stream. That aside, the city was covered with immense beauty with lovely people. There were echoes of good music across...
6 Pages(1500 words)Essay

Signifiance of Frankenstein in the Romantic period or era

...; the progression of history sees Man abandon God in the Victorian era” (Bushi, 2002). While some see the criticism as an affirmation of the immutable powers of God, the true emphasis is on respecting the sanctity of nature as a perfect manifestation of God’s will. In the end, of course, the successful creation and Frankenstein’s reaction to it leads to chaos in the community and the destruction of Frankenstein’s entire family, beginning with the most innocent. This is also a reflection of the ideals of the Romantic age in that the focus on nature was seen as most possible by those who remained most uncorrupted by the changes wrought in the city. Despite Frankenstein’s attempt to usurp nature, the novel...
5 Pages(1250 words)Research Paper

...﻿Classical and Romantic Era styles in music Introduction Music at the beginning of the 20th century began to change rapidly with experimentation and the breaking of musical theories. Various composers began to represent not only new music theories but also various innovations which could be used with music. This came as a set of avant – garde ideals which represented a break from the strict Classical and Romantic Era styles. The composers of Les Six were some of the individuals who began to represent new theories and ways of constructing pieces outside of the traditional theories. The various elements which began to be incorporated into this style worked with new sounds and methodologies of the works while adding in a sense... which...
11 Pages(2750 words)Essay

...Jerry Ciacho April 27, Music from the Romantic Period The music from the Romantic era was recognized as a rebellion ical music, for challenging the rules of the arrangement and construction of the Classical Period. The Romantic Period explored the usage of great ensembles, intense emotion, and untamed orchestration. It was the period subsequent to the Classical period, which was essentially a brief era. Only two Classical-era composers are extensively known: Haydn and Mozart. The Romantic period yielded more composers who are still recognizable and well liked today. Schumann, Tchaikovsky, Schubert and Chopin are possibly...
1 Pages(250 words)Essay
sponsored ads
Save Your Time for More Important Things
Let us write or edit the essay on your topic "Romantic Era" with a personal 20% discount.
GRAB THE BEST PAPER

Let us find you another Essay on topic Romantic Era for FREE!