Comments (0)
Add to wishlistDelete from wishlist
Cite this document
Summary
Between August 1945 and April 1952, the United States and other Allied Powers carried out an operation, the occupation of Japan, with Gen. MacArthur being the first Supreme Commander. Japan lost all the territory it had conquered after 1894. In 1947, there was a new…
Download full paperFile format: .doc, available for editing
HIDE THIS PAPERGRAB THE BEST PAPER92% of users find it useful 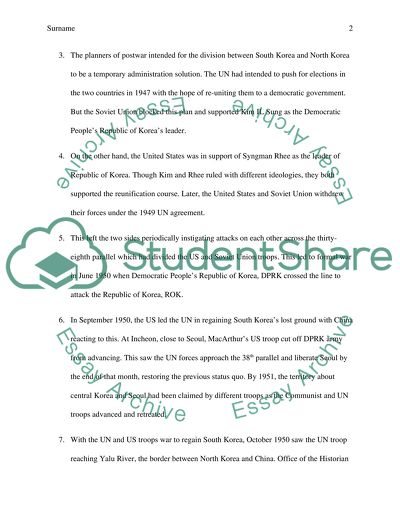 Historical Significance for Period 1945 to 1952 Between August 1945 and April 1952, the United s and other Allied Powers carried out an operation, the occupation of Japan, with Gen. MacArthur being the first Supreme Commander. Japan lost all the territory it had conquered after 1894. In 1947, there was a new constitution in force with the emperor being stripped of all military and political power and just made a state symbol. Japan was forbidden from leading any war or maintaining an army. The occupation ended in April 1952 with a peace treaty (Sugita 20).
2. The Korean War saw the United States focus on Asia as the problem between 1949 and 1950. With the defeat of the Empire of Japan, Manchuria, together with Taiwan was given back to China. The USSR recognized Chiang, which included Manchuria as it had occupied Manchuria in war. It extended limited aid to Mao and turned over the cities in Manchuria to Chiang (Brands 280).
3. The planners of postwar intended for the division between South Korea and North Korea to be a temporary administration solution. The UN had intended to push for elections in the two countries in 1947 with the hope of re-uniting them to a democratic government. But the Soviet Union blocked this plan and supported Kim IL Sung as the Democratic People’s Republic of Korea’s leader.
4. On the other hand, the United States was in support of Syngman Rhee as the leader of Republic of Korea. Though Kim and Rhee ruled with different ideologies, they both supported the reunification course. Later, the United States and Soviet Union withdrew their forces under the 1949 UN agreement.
5. This left the two sides periodically instigating attacks on each other across the thirty-eighth parallel which had divided the US and Soviet Union troops. This led to formal war in June 1950 when Democratic People’s Republic of Korea, DPRK crossed the line to attack the Republic of Korea, ROK.
6. In September 1950, the US led the UN in regaining South Korea’s lost ground with China reacting to this. At Incheon, close to Seoul, MacArthur’s US troop cut off DPRK army from advancing. This saw the UN forces approach the 38th parallel and liberate Seoul by the end of that month, restoring the previous status quo. By 1951, the territory about central Korea and Seoul had been claimed by different troops as the Communist and UN troops advanced and retreated.
7. With the UN and US troops war to regain South Korea, October 1950 saw the UN troop reaching Yalu River, the border between North Korea and China. Office of the Historian observed that the Chinese considered this as threatening their security and sent its forces to North Korea in 1950 forcing MacArthur’s army to retreat behind the thirty-eighth parallel.
8. Philippines sent its troops to peninsula to contain the advance of communism following the entry of the UN into the internal war between DPRK and ROK in June 1950. This would further help prevent the spread of the conflict outside Korea.
9. Operating with an armistice as an informal ceasefire agreement, the formal peace treaty had been scheduled for 1954 Geneva conference, but the colonial war of France in Indochina preceded this. This led to the US signing a defense treaty with ROK and the US semi-permanently becoming part of DMZ.
10. With the communist successes recorded in Korea, President Truman was concerned that it would encourage action from People’s Republic of China. The communists triumphed on Chinese mainland causing them to retreat to Taiwan and there was the threat that PRC would move to consolidate its power all over China.
11. After hostilities emerged in Korea, President Harry transferred the US 7th Fleet into Taiwan to contain military conflict. This was considered as interference of China’s internal affairs by PRC.
12. According to Office of the Historian, Japan had captured Marshall Island in the Pacific among other provinces and the Island was later captured by the US. In October 1945, the US Coast Guard Vessels and Navy were lost in the Marshalls Islands.
Works Cited
Brands, H. “Who Saved the Emperor?” University of California Press. 75.2 (2006, May): 271 –305.
Office of the Historian. “Korean War and Japan’s Recovery.” Bureau of Public Affairs, United States Department of State. Web. 1 February 2012. .
Sugita, Y. Pitfall or Panacea: The Irony of US Power in Occupied Japan 1945 – 1952. Routledge, 2003. 20 – 25. Read More
Share:
Tags
Cite this document
(“WW2 Essay Example | Topics and Well Written Essays - 250 words”, n.d.)
Retrieved de https://studentshare.org/history/1588475-ww2

CHECK THESE SAMPLES OF WW2

Role of Malta in WW1 and WW2

...? The Role of Malta in WW1 and WW2 The Role of Malta in WW1 and WW2 The small Mediterranean island of Malta played a pivotal role inthe courses of both the two world wars. Based on several reasons, with the main one being the island’s strategic geographical position, Malta found itself deeply involved in direct military and indirect aspects of World War I and II. The dynamics of this involvement took different courses for the two wars, as Malta played different but crucial roles. A common aspect, however, is the interaction of Malta with the main countries involved in the war. These include UK, France, Italy and Turkey among others. The structure of the paper entails a look at the role of the island in...
14 Pages(3500 words)Essay

...? MDG’s and the Post WW2 Development Project Insert Insert Grade Insert 30 October Introduction It is an established fact that the millennium development goals (MDG’s) represent the most useful definition of the post-Second World War development project in the sense that they incorporate the crucial aspects of the post-war development agenda namely globalization and development. In essence, MDG’s incorporate the basic parameters of a globalized world which was a creation of European countries towards the conclusion of the colonial period (Escobar 2004, 207-230). Development, on the other hand, was crucial in the sense that it denoted the significant blueprint to a new era. Development and globalization are terms that came...
10 Pages(2500 words)Essay

... Teacher Recursive Use of Wealth and Schindler's List Schindler's List {SL} begins with a scene of peaceful Jews before the roundingup. They’re lighting candles, and having a Sabbath, singing in Hebrew. This sequence is in color. The smoke of the candle becomes the smoke of a train that is scheduled to take the Jews to the ghettoes. There are scenes of families registering, and we get to meet the people who will be prominent in the film, including Helen. What follows shows that there was a recursive use of wealth throughout the film – there are 25 occurrences {OCC} of wealth shown in the film. The TYP of the wealth is {M}oney – this means that actual cash is shown; {T}alking about wealth – these are the scenes that either show... Teacher...
10 Pages(2500 words)Essay

...? IMPACT OF WW2 ON CHILDREN (The Forgotten Victims of World War II) As if World War I had not disrupted life in general, world saw beginning of another horrifying era: World War II. Even though men and women both made unlimited sacrifices for their countries; the role played by a very important part of society, the young generation cannot be ignored. Youth showed strength and unity in face of adversity. The hardships that children had to bear during World War II are beyond imagination. Restriction of diet, evacuations to be safe from air raids and bombings, loss of family members, and disruption of education systems are only a few of the problems faced by these brave souls. World War II, as often called as “War against...
8 Pages(2000 words)Essay

Fallacies of the Anti-Federalists in the British Empire

African americans and the military during WW2

...﻿Czechoslovakia post WW2 The Prague was the era of political liberalization in Czechoslovakia under the domination by the Soviet Union following the Second World War. One of the reformers in this period was Alexander Dubcek who attempted to give additional rights to the people in an act of democratization and incomplete decentralization of the economy. Freedoms granted by these reformers comprised loosening of constraints on travel, speech, and the media. Such reforms, mostly the decentralization of governmental authority, angered the Soviets, and after failed negotiations, they decided to invade Czechoslovakia. Subsequent leaders emerged to restore the economic and political values prior to Dubcek’s rule of the Communist party... post WW2...
2 Pages(500 words)Essay

Insurgent Movements During and Immediately After WW2

...Insurgent Movements during World War II (French Résistance) Insurgent Movements during World War II (French Résistance) French Resistance was one of the insurgent movement that fought against Nazis Germany. It was a very heterogeneous movement. The myth created by Charles de Gaulle claims that Resistance played the important role in the liberation of France. However, the facts and documents cannot fully support this (Folker, 2012). The Resistance begun soon after the defeat in 1940. A part of the Frenchmen did not accepted the situation after Petain become a head of the country. The idea of Resistance was also partially connected with the xenophobia. The roots of xenophobia are in the consequences of Franco-Prussian War... Movements during ...
2 Pages(500 words)Essay

... To answer the question how the popular fashion of 1940 has influenced the modern design, it is imperative to analyze the designs that were used in 1940s and the trend the modern design has assumed. A comparative approach will play a key role in understanding the different fashion trends around the globe and help in making a clear point on the popularity issue. The timing was during the Second World War and the fashion mostly revolved around drab colors, functional cuts and a limited edition of cutting-edge military swag that embraced military restrictions. This was how the 1940s generation paved their way through the fashion world. The war was on and there was no time to create or design new fashion trends. The absence... To answer the...
2 Pages(500 words)Essay

...﻿ Reasons Germany lost WW2 to Russia The Second World War (WW2) which occurred between 1939 and 1945 was a military conflict that involved almost all the world’s nations. It is generally accepted that the Second World War started on September 1, 1939 when Nazi Germany invaded Poland. This, almost immediately, led most Commonwealth countries, the British Empire and France to declare war on Germany. Many nations that were initially uninvolved in the war later joined taking different sides more as a result of Germany invading the Soviet Union. The war, therefore, involved all the world’s great powers which were organized into two opposing military camps; the Axis and the Allies. The global war which historically has been known... and...
12 Pages(3000 words)Term Paper
sponsored ads
Save Your Time for More Important Things
Let us write or edit the essay on your topic "WW2" with a personal 20% discount.
GRAB THE BEST PAPER

Let us find you another Essay on topic WW2 for FREE!