Comments (0)
Add to wishlistDelete from wishlist
Cite this document
Summary
during the 1850s were thoroughly discussed by a series of debates between Stephen Douglas, Democratic senator, and Abraham Lincoln, a Republican challenger. These politicians presented two contrasting views regarding slavery. Douglas (as…
Download full paperFile format: .doc, available for editing
HIDE THIS PAPERGRAB THE BEST PAPER94.4% of users find it useful 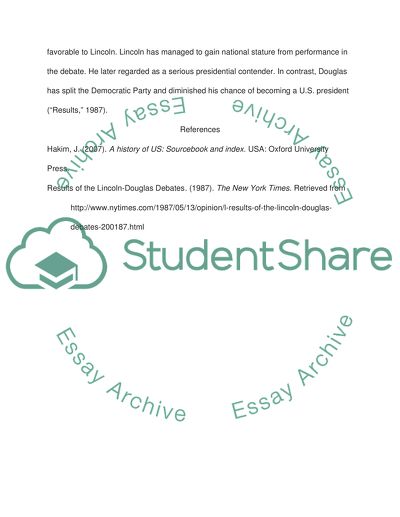 Question Compare and contrast the political attitudes toward slavery of Stephen A. Douglas with those of Abraham Lincoln. What were the results ofthe Lincoln-Douglas Debates?
The crucial issues that divided the U.S. during the 1850s were thoroughly discussed by a series of debates between Stephen Douglas, Democratic senator, and Abraham Lincoln, a Republican challenger. These politicians presented two contrasting views regarding slavery. Douglas (as cited in Hakim, 2007, p. 158) asserted that slavery in the U.S. was a dying institution, which could not exist and prosper in western territories. In contrary, Lincoln (as cited in Hakim, 2007, p. 158) argued that slavery is an institution, which is hungry for new territory. The sharpest contrast between the views of these candidates lies in the rights of the African Americans. Douglas has expressed his desire for “citizenship for whites only”; meanwhile, Lincoln insisted the equal rights of every living man-including African American-for life, fruits of their labor, and liberty (as cited in Hakim, 2007, p. 158). He further argued that the struggle against slavery reflects an internal turmoil of distinguishing the right from wrong throughout the world. Lincoln supported the “Fugitive State Law”; however, he strongly opposed the interference with slavery in certain states where it has already existed (as cited in Hakim, 2007, p. 158).
Douglas and Lincoln have participated in seven debates in front of approximately 15,000 individuals and travelled for estimated 10,000 miles for their campaigns (as cited in Hakim, 2007, p. 158). The immediate result of these debates was deemed as inconclusive. However, in the long run, the debates became fatal to Douglas and favorable to Lincoln. Lincoln has managed to gain national stature from performance in the debate. He later regarded as a serious presidential contender. In contrast, Douglas has split the Democratic Party and diminished his chance of becoming a U.S. president (“Results,” 1987).
References
Hakim, J. (2007). A history of US: Sourcebook and index. USA: Oxford University Press.
Results of the Lincoln-Douglas Debates. (1987). The New York Times. Retrieved from
http://www.nytimes.com/1987/05/13/opinion/l-results-of-the-lincoln-douglas-debates-200187.html
Question 2. Both Grant and Sherman pursued a new type of warfare. Explain the change in strategy these men employed. Note a battle or campaign in which each man used this new strategy. Finally, was this strategy effective? Why or why not?
Grant and Sherman introduced a “new type of warfare,” which has defeated the south (as cited in House, 2008, p.53). The increased lethality of weapons has impelled armies to disperse in order to survive. Battlefield expansion has doomed the concentration at one particular point. The distribution of forces led to the distributed operations. Campaigns began to consist of various actions (House, 2008, p. 53). It contained numerous operations with several maneuvers and battles. This type of warfare is commonly termed as operational art. Grant and Sherman became the first practitioners of an operational art of war. They applied operational art in the American civil war whereby conduct of war involved succession of operations distributed in space and time in order to attain a certain goal (House, 2008, p. 53). Grant and Sherman sought opportunities to bore holes to the enemy’s lines and destroy them with flank attacks. They then focused on raiding strategy. They constantly kept their attention to their prey to prevent initiatives from confederates. In addition, they ensured that the enemies can’t send reinforcement elsewhere (Glaathar, 1998, p. 235).
The difference between operation art and classical warfare lies on its operations. Operational art necessitates distributed operations while classical warfare focused its operations at a single point (House, 2008, p. 53). The former can be considered as effective as it is the type of warfare utilized to defeat the south. Grant and Sherman prosecuted their enemies with savage efficiency through this type of warfare. They seized every opportunity to attack the enemy. In addition, they strategically conducted their operations in such a manner that would fatally weaken and wound the enemy (Hassell & Breslin, 2011).
References
Glatthaar, J. T. (1998). Partners in command. USA: Simon and Schuster.
Hassell, A. V. & Breslin, E. (2011). Scherman: The ruthless victor. USA: Thomas Nelson
Inc.
House, J. M. (2008). Why war? Why an army? USA: Greenwood Publishing Group. Read More
Share:
Tags
Cite this document
(“Homework Essay Example | Topics and Well Written Essays - 500 words - 4”, n.d.)
Homework Essay Example | Topics and Well Written Essays - 500 words - 4. Retrieved from https://studentshare.org/history/1587833-homework

... The Case Against Homework Many teachers think that homework is good because they think it reinforces a students learning. I do not feel that way. I believe that homework creates more challenges for a student especially when they have no one to help. When a child enters school, they spend more time in school then they do at home. They have some subjects that are easy for them and others that are very difficult. When they have to take work home, it takes away from the opportunity to rest and relax. All children need the opportunity to move away from school and do something different. I am not sure that there are really positive effects of homework. I know myself that if I understand the class, homework goes very fast. When I do... not, it...
3 Pages(750 words)Essay

...Homework Answers Part One Question Planning for an uncertain situation encompasses a broad process known as contingency planning. This broad process consists of the following components: A plan for incident response A plan for disaster recovery A plan for business continuity These three components account for all-round variables that constitute an uncertain occurrence, thereby informing the planning process for the underlying situation. Question 2 NIST defines a CP process that is made up of seven steps, which include: i. Formulation of a policy statement in relation to contingency planning. ii. Conducting an analysis of business impact. iii. Determination of preventive controls. iv. Development of strategies for...
3 Pages(750 words)Case Study

...Homework Questions American farmers were faced with various economic and social ills at the turn of the century. Farmers got faced with a banking system that insisted on the gold standard as its monetary system. The railroad system at the time was also deemed as capricious and unfair. The farmers also got faced with rampant land speculation that drove prices for land up. The populist movement referred to the advocacy of the people’s party in 1892 (Roark et al 352). The movement advocated against the industrial society at the time. The movement got based around poor and hard-pressed farmers. The movement called for the formation of a sub treasury, land reform, currency reform, and the empowerment of the common people....
1 Pages(250 words)Coursework

Let us find you another Essay on topic Homework for FREE!