Comments (0)
Add to wishlistDelete from wishlist
Cite this document
Summary
The institution of slavery was quite strong in the 19th century in United States of America and the country was divided into two factions (North and South) with one opposing and the other favoring slavery. The moral arguments of those of opposed slavery and their political…
Download full paperFile format: .doc, available for editing
HIDE THIS PAPERGRAB THE BEST PAPER97.7% of users find it useful 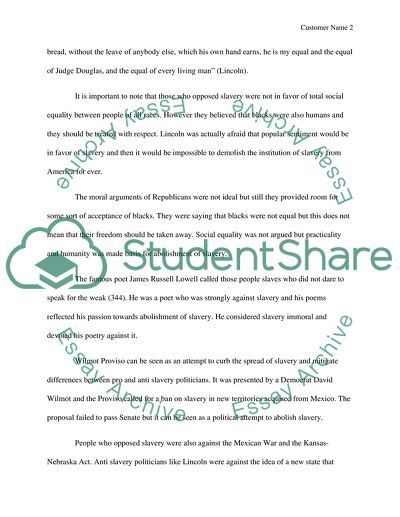 Inserts His/her Inserts Inserts Grade (18, 12, Spread of Slavery: The Mexican War and Kansas-Nebraska Act
The institution of slavery was quite strong in the 19th century in United States of America and the country was divided into two factions (North and South) with one opposing and the other favoring slavery. The moral arguments of those of opposed slavery and their political actions will be discussed in this paper.
The Mexican War of 1846 played a major role in expansion of slavery and so did the Kansas-Nebraska act. Both can be seen as attempt to extend slavery to national levels. The Mexican War and annexation of Texas started a debate whether slavery should be made legal or not in regions that were annexed from Mexico. The Kansas-Nebraska act also pushed the country into civil war and divided the nation into two factions. The act also gave rise to a new Republican Party arguing abolishment of slavery.
The arguments of Republicans against slavery were based on morality. Republicans treated everyone equally and considered freedom the most basic right. Lincoln said in his famous Lincoln-Douglas Debate “I agree with Judge Douglas he is not my equal in many respects—certainly not in color, perhaps not in moral or intellectual endowment. But in the right to eat the bread, without the leave of anybody else, which his own hand earns, he is my equal and the equal of Judge Douglas, and the equal of every living man” (Lincoln).
It is important to note that those who opposed slavery were not in favor of total social equality between people of all races. However they believed that blacks were also humans and they should be treated with respect. Lincoln was actually afraid that popular sentiment would be in favor of slavery and then it would be impossible to demolish the institution of slavery from America for ever.
The moral arguments of Republicans were not ideal but still they provided room for some sort of acceptance of blacks. They were saying that blacks were not equal but this does not mean that their freedom should be taken away. Social equality was not argued but practicality and humanity was made basis for abolishment of slavery.
The famous poet James Russell Lowell called those people slaves who did not dare to speak for the weak (344). He was a poet who was strongly against slavery and his poems reflected his passion towards abolishment of slavery. He considered slavery immoral and devoted his poetry against it.
Wilmot Proviso can be seen as an attempt to curb the spread of slavery and mitigate differences between pro and anti slavery politicians. It was presented by a Democrat David Wilmot and the Proviso called for a ban on slavery in new territories acquired from Mexico. The proposal failed to pass Senate but it can be seen as a political attempt to abolish slavery.
People who opposed slavery were also against the Mexican War and the Kansas-Nebraska Act. Anti slavery politicians like Lincoln were against the idea of a new state that would allow slavery. Also the Kansas-Nebraska Act allowed popular sovereignty to decide whether slavery should be banned or not in these areas. This act was abused vehemently by politicians of the North.
Works Cited Page
Lincoln, Abraham. Debate at Ottawa, Illinois, 1858. Print
Lowell, James Russell. A Stanza of Freedom. From An American Anthology, by Edmund Clarence Stedman, 1900. Print Read More
Share:
Tags
Cite this document
(“Assess the moral arguments and political actions of those who opposed Essay”, n.d.)
Assess the moral arguments and political actions of those who opposed Essay. Retrieved from https://studentshare.org/history/1586961-assess-the-moral-arguments-and-political-actions-of-those-who-opposed-to-the-spread-of-slavery-in-the-context-of-the-mexican-war-and-the-kansas-nebraska-act

“Assess the Moral Arguments and Political Actions of Those Who Opposed Essay”, n.d. https://studentshare.org/history/1586961-assess-the-moral-arguments-and-political-actions-of-those-who-opposed-to-the-spread-of-slavery-in-the-context-of-the-mexican-war-and-the-kansas-nebraska-act.
Comments (0)
Click to create a comment or rate a document

...? MEXICAN-AMERICAN WAR (First American Intervention) By: 2 Table of Contents Introduction/Thesis Page 3 History Page 3+4 Social Impacts Page 4+5 Political Impacts Page 5-7 Economic Impacts Page 7-9 Conclusion Page 9 Reference Page Page 10 First American Intervention In a world of moral diversity, change, and self-awareness, we confront hostility due to the past. History has shaped much of what people believe to be true today. The resentment stems from past hurt and pain, and even war. This dreaded word permeates the essence of all who live among it, all who circulate its beliefs, and all who create a...
7 Pages(1750 words)Research Paper

...of an equivalent footing together with the initial states with all due respect whatsoever. Section two of Transcript of Kansas-Nebraska Act (1854) states that the authority and power of the executive over and in the Nebraska Territory shall be awarded to the Governor who shall be in that office for at least four years to the point at which his or her successor shall be qualified and appointed, unless the Governor is removed from the office by the United States’ President. The section entails that the Governor remains the commander in chief of the militia and reside within that territory thereof. Such Governors may grant respites and pardons for the...
5 Pages(1250 words)Research Paper

...?The Kansas-Nebraska Act The Kansas-Nebraska Act is one of the major governmental policies affected the Midwest as a region. This is a policy shift affected the Midwest prior to the Civil War. Southerners believe the idea in this policy shift would create Nebraska as a free soil, but Kansas would be open to slavery (Boyer 309). This eventually sparked storm of protest. This conflict eventually started from the full advocate of southerners to southern-based Pacific route instead of the Midwestern part. Then Nebraska was closer to region of...
5 Pages(1250 words)Essay

Those who pray and those who fight

...diverse religious roles, for instance, the village priests had the task to satisfy the serfs’ spiritual needs. This group also consisted of the monks who lived in the monasteries, and consisted mostly of educated monks and who were responsible for producing most of the books made during that period. The last order consisted of those who fought. During the medieval periods, wars were prevalent and were mostly fought by knights. Wars were expensive and since peasants could not afford arsenals of war such as horses, swords or a suit of armor, this group, therefore, consisted of people from the wealthiest order, that is, the...
4 Pages(1000 words)Essay

.... In the case of war against Iraq there are a lot of laws that are not being followed. Some actions taken by both parties are illegal but it is legitimate since the order comes from the highest authority. The action done by Milosevic during the war is legitimate since it is coming from the president. There are cases wherein an immediate action is needed and it sometimes causing someone to break the law. In this case the one who conduct the action are being blamed. However there are many cases wherein political actions are being carried out by subordinates. Political...
4 Pages(1000 words)Essay

Wilmot's Proviso and the Kansas-Nebraska Act

...to Kansas to influence the forthcoming elections. This resulted in scuffles all over Kansas causing bloodshed. This brought the pro-slavery and anti-slavery activists in combat on many notions, rejecting the results of the elections on bases of rigging. Federal troops were called in to stop the violence and establish peace while the pro-slavery legislatures were dispersed. Even so, the next few elections were discarded on same charges. These political power games continued till the Civil War was declared in the region. Though both Wilmot’s Proviso and Kansas Nebraska Act...
1 Pages(250 words)Assignment

...totally opposed the Missouri Compromise of 1820, which banned the slavery in the north Kansas for thirty years. (Bauholz, 2011). At that time, former Congressman Abraham Lincoln was among the people who strongly opposed any law that could extend slavery in the US territories. (McNamara, n.d.) McNamara, (n.d.) has also noted the continuing disagreement between South and North over slavery issues led to establishment of two opposing governments within the Kansas territories. Subsequently, many humanitarian issues and injustices between slaves and their slave owners arose; and they...
2 Pages(500 words)Essay

...Summarize the issues and events of the Mexican War. What did the United s achieve as a result of the war you chose? The Mexican War was an event between the United States and the country of Mexico which started in 1846 and ended in 1848. Relations between the two countries had been strained for years before actual hostilities came to a head and fighting occurred, mostly due to the annexation of Texas in 1845 (Heidler and Heidler 47). Also at hand were the issues of land known as California and New Mexico, considered holdings of Mexico at the time and desired by the United States (“U.S. History: Pre-Columbian to the New Millennium”). It was a point of fact...
2 Pages(500 words)Essay

...new conflicts of a grown-up life. Erickson called the last three periods adults` crises. The first conflict of an early adulthood is between intimacy and isolation. The main task of this period is to become intimate with someone and to form true, meaningful bond. However, loving and committed relationships with other people can be possible for those who have passed the stage of identity development successfully (Aiken, 1998). This phase takes place between 19 and 40 at the time when people usually find true friends, get married, and have children. For the middle-aged people the main conflict arises between generativity and stagnation. The task of this period is to develop interest in future generation...
4 Pages(1000 words)Essay
sponsored ads
Save Your Time for More Important Things
Let us write or edit the essay on your topic "Assess the moral arguments and political actions of those who opposed to the spread of slavery in the context of the mexican war and the Kansas-Nebraska act" with a personal 20% discount.
GRAB THE BEST PAPER

Let us find you another Essay on topic Assess the moral arguments and political actions of those who opposed to the spread of slavery in the context of the mexican war and the Kansas-Nebraska act for FREE!