Comments (0)
Add to wishlistDelete from wishlist
Cite this document
Summary
More specifically, it will try to look into factors that facilitated imperialism and the effects of American imperialism policy.
Imperialism has been defined as the practice, policy or advocacies…
Download full paperFile format: .doc, available for editing
HIDE THIS PAPERGRAB THE BEST PAPER98.2% of users find it useful 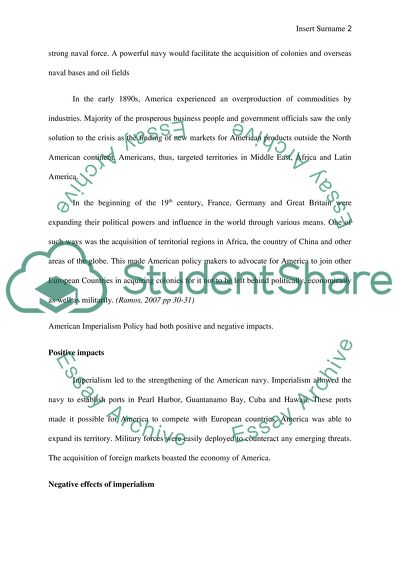 American Imperialism Policy This paper will seek to examine the American Imperialism Policy in the 19 century. More specifically, it will try to look into factors that facilitated imperialism and the effects of American imperialism policy.
Imperialism has been defined as the practice, policy or advocacies that aim at extending the powers and the domination of a country. This is usually by acquiring territories directly or through the process of gaining control over the economic and political lifestyle of other areas indirectly. More specifically, it is the process of imposing or extending of power, authority or influence. (Fouskas and Bülent, 2005 p 1)
The factors that motivated the American policy of Imperialism in the 19th century can be grouped into military, political and economic interests. In the 1890s, America saw the emergence of new navalist’s ideologies, which were greatly advocated for. Alfred T. Mahan, a former president at the Naval War College argued out the need for America to battle out for naval supremacy in the world. Mahan pointed out that foreign commerce was crucial to the survival of any great nation and for a powerful country in the world; thus, there was a need to protect the sea routes. According to Mahan, all these could only be achieved by having a strong naval force. A powerful navy would facilitate the acquisition of colonies and overseas naval bases and oil fields
In the early 1890s, America experienced an overproduction of commodities by industries. Majority of the prosperous business people and government officials saw the only solution to the crisis as the finding of new markets for American products outside the North American continent. Americans, thus, targeted territories in Middle East, Africa and Latin America.
In the beginning of the 19th century, France, Germany and Great Britain were expanding their political powers and influence in the world through various means. One of such ways was the acquisition of territorial regions in Africa, the country of China and other areas of the globe. This made American policy makers to advocate for America to join other European Countries in acquiring colonies for it not to be left behind politically, economically as well as militarily. (Ramos, 2007 pp 30-31)
American Imperialism Policy had both positive and negative impacts.
Positive impacts
Imperialism led to the strengthening of the American navy. Imperialism allowed the navy to establish ports in Pearl Harbor, Guantanamo Bay, Cuba and Hawaii. These ports made it possible for America to compete with European countries. America was able to expand its territory. Military forces were easily deployed to counteract any emerging threats. The acquisition of foreign markets boasted the economy of America.
Negative effects of imperialism
Many of the countries that America annexed rebelled against the presence of the foreign power. The presence of foreign powers led to the development of bitterness and mistrust. This led to frequent conflicts between the American administration and the Natives. The Philippine-American war for instance left 24,000 people dead and did cost America $400 million dollars. The annexation of Cuba by America contributed to the conversion of many Cubans to communism which endangered the lives of Americans by housing the Soviet nuclear missiles during the crises of Cuban missiles.
In conclusion, the American Imperialism policy, generally, had positive impacts on America. Many American territories remained prosperous. The Supremacy of the American military was maintained and has remained a super power to date. American troops were able to counter coups in Grenada and Haiti. The presence of Americans in Philippines made it possible for Taiwan and South Korea to remain as independent countries. (talktank.wordpress.com, 2011)
Work Cited:
Fouskas, Vassilis and Bülent Gökay. The new American imperialism: Bushs war on terror and blood for oil: Praeger Security International Series. Edition illustrated. Greenwood Publishing Group, 2005, p 1.
Ramos, Efrén Rivera. American Colonialism in Puerto Rico: The Judicial and Social Legacy. Markus Wiener Publishers, 2007, pp 30, 31.
talktank.wordpress.com. The First American Empire and Imperialism. (2011). Retrieved 26th November 2011 http://talktank.wordpress.com/2011/02/09/the-first-american-empire- and-imperialism/ Read More
Share:
Tags
Cite this document
(“What motivated the United States to pursue an Imperialist policy Essay”, n.d.)
Retrieved from https://studentshare.org/history/1585258-what-motivated-the-united-states-to-pursue-an-imperialist-policy-during-the-19th-century

(What Motivated the United States to Pursue an Imperialist Policy Essay)
https://studentshare.org/history/1585258-what-motivated-the-united-states-to-pursue-an-imperialist-policy-during-the-19th-century.

...19th Century United s Presidential Elections The 1800 United s presidential election is one of the most controversial in the history of United States and became a turning point in the making of the nation’s Constitution. The candidates in the said election were the incumbent President John Adams of the Federalist Party and his Vice President Thomas Jefferson of the Democratic - Republican Party. However, to make things more difficult, each party wants to have a President and a Vice President in the White House. Hence, each party nominated a second contender: Aaron Burr for the Democratic-Republicans and Charles Pickney for the...
3 Pages(750 words)Essay

...that Libya is already resolved, it is time for the united states not only to call upon Assad to step aside (Hook 2010), but also to take action and make sure his dominion is entirely destroyed. It was in Ausgust this year when president Obama asked Syria’s leader, Bashar al-Assad to step aside and leave the office. However, ever since that time, Assad is still in office and very keen at mistreating people. This means that United States need to come up with a tactic that will make sure he leaves his regime in Damascus. The target of United States policy should therefore, ensure that there is a stop to the aggression that...
5 Pages(1250 words)Essay

...?Political and Economic Foreign Policy Developments of the United s in the 19th Century American foreign policy in the 19th century is illustrated as one that abstained from political and economic relations with other countries, as evidenced in the period between 1939 and 1942. Proponents of isolationism sought to preserve the freedom of action of the United States while maintaining cultural and economic interactions with other countries. As such, this led to the adoption of the isolationist doctrine that was precipitated by America's avoidance of the war in Europe.1 This...
4 Pages(1000 words)Essay

...In the wake of the 20th century, the United s has undergone several advancements both in their industries and technology. Aside from these, the United States also has become the prime military force in the world. For decades, the United States has often played a part of being a policeman to the world; always to the rescue of oppressed countries and people, highlighted in events such as the World Wars and the various minor wars that occurred throughout the century. In the dawn of the new millennium, an infamous event happened that will forever be recorded in the chronicles of modern history. The attack on the towers of the...
5 Pages(1250 words)Book Report/Review

...” amongst different interest groups or centres of power that created it: business, government, and the people who continually attempt to balance that power. This conflict has been constructive and peaceful, although with a brief violent interlude during the Civil War from 1861 to 1865 (Zinn). Rise of American Business Power The first English settlement in America was established in 1607 as the Virginia Company of London. Since then, the corporation has been the chosen vehicle for local and state governments to achieve public ends – building roads, bridges, and canals through private investment. The private business corporation appeared in the 19th century, and by the...
12 Pages(3000 words)Essay

... regime of state dominance based upon interventionist principles which had led to the problems of multidimensional inefficiencies and under-competitiveness of the produce, thereby leading to stagnation of economic growth, before directing it towards a severe macroeconomic imbalance and Foreign Exchange crisis. Given the protracted adverse effects of the development regime adopted in post-independence, the motivations for its espousal do require explorations. The answer lies in the history of the Indian economy as a British colony. During this period the British imperialists utilized the abundant resources and evolved the basic economic structure of India to the advantage of the British economy (Metcalf and Metcalf, 2006, p 125... identity...
12 Pages(3000 words)Essay

...European countries gobbled up more territories and the Ottomans had to rely more on Germany for support, which in turn led to more debt. They tried to modernize their state, as did other local leaders in the Middle East, but to no avail. By the late 19th century, there were rapid reforms underway. It is true that railways and telegraphs lines were built, and that schools and universities were opened—but all these efforts to modernize were too expensive, and the debt continued to mount. Many countries went bankrupt, spending more than they brought in and again this led to more Western control. Also, these efforts to modernize were also very divisive: in each of the countries or regions in...
22 Pages(5500 words)Research Paper

Liberty in the United States during the late 19th century

...Liberty in the United s During the Late 19th Century Liberty from a contemporary point of view can be defined as feeling of equal rights and as such, liberals advance philosophical arguments as democracy, human rights, freedom to choice to religion, capitalism, and constitutionalism. Liberalism become evident around 18th Century widely accepted as classical liberalism and later rejuvenated around 20th century popularly advancing social liberalism (Emma Goldman 123). Around 19th century, liberty advanced the enlightenment age rejecting a number of government pioneered assumptions including established...
2 Pages(500 words)Essay

...﻿ After the attacks of September 11, 2001, the shape and scope of American foreign policy changed forever. The United States government came to the conclusion that in order to obtain domestic security, intervention across the globe was absolutely necessary to fight the war on terror. The U.S. armed forces prepared for war by not only increasing the military budget, but they also put forth principles and values fundamental to the American dream to garner support for any conflict deemed a necessity. The federal government firmly believed that the U.S. military should sustain a significant presence in the Middle East for several years, while they completed scattered military bases to...
4 Pages(1000 words)Assignment
sponsored ads
Save Your Time for More Important Things
Let us write or edit the essay on your topic "What motivated the United States to pursue an Imperialist policy during the 19th century" with a personal 20% discount.
GRAB THE BEST PAPER

Let us find you another Essay on topic What motivated the United States to pursue an Imperialist policy during the 19th century for FREE!