Comments (0)
Add to wishlistDelete from wishlist
Cite this document
Summary
In the research paper “Interest groups and Political parties” the author defines interest groups in political terms as a collection of individuals which pursue a political motive or an ideology or strive to support or go against any particular issue…
Download full paperFile format: .doc, available for editing
HIDE THIS PAPERGRAB THE BEST PAPER91.4% of users find it useful 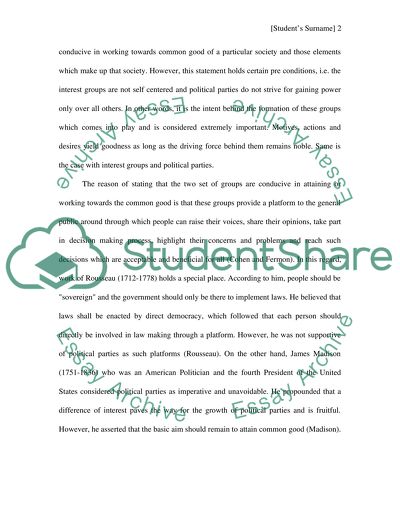 Are interest groups and political parties conducive to the common good? Why or why not? Interest groups are those groups of individuals which strive for the attainment of a common goal. Interest groups can be defined in political terms as a collection of individuals which pursue a political motive or an ideology or strive to support or go against any particular issue. These groups can be of several types; they may be working for the welfare of the masses i.e. “positive interest groups” or may be pursuing their vested interests i.e. “negative interest groups” (Lane and Ersson). On the other hand, a political party or a political association primarily suggest an amalgamation of people aiming to influence policy making by occupying such offices which are authorized to make polices. These offices are occupied by going through electoral process. Tansey explains a political party as “a group seeking to wholly or partly take over the government of a country by contesting in elections” (Tansey). Another definition suggests these parties are “organized groups aiming to manipulate policy making” (Daver).
Common good can be referred to as the goodness of an event or a phenomenon that is shared by all communities of a given society. Thus, keeping in view the roles played by interest groups and political parties, it can be stated that both the groups are conducive in working towards common good of a particular society and those elements which make up that society. However, this statement holds certain pre conditions, i.e. the interest groups are not self centered and political parties do not strive for gaining power only over all others. In other words, it is the intent behind the formation of these groups which comes into play and is considered extremely important. Motives, actions and desires yield goodness as long as the driving force behind them remains noble. Same is the case with interest groups and political parties.
The reason of stating that the two set of groups are conducive in attaining or working towards the common good is that these groups provide a platform to the general public around through which people can raise their voices, share their opinions, take part in decision making process, highlight their concerns and problems and reach such decisions which are acceptable and beneficial for all (Cohen and Fermon). In this regard, work of Rousseau (1712-1778) holds a special place. According to him, people should be "sovereign" and the government should only be there to implement laws. He believed that laws shall be enacted by direct democracy, which followed that each person should directly be involved in law making through a platform. However, he was not supportive of political parties as such platforms (Rousseau). On the other hand, James Madison (1751-1836) who was an American Politician and the fourth President of the United States considered political parties as imperative and unavoidable. He propounded that a difference of interest paves the way for the growth of political parties and is fruitful. However, he asserted that the basic aim should remain to attain common good (Madison).
According to Raadschelders, people living in a society participate in decision making and sharing their likes and dislikes publicly through direct and indirect platforms. In direct participations they participate in elections, referendum, polls, surveys, etc. On the other hand, in case of indirect participation they tend to get associated with political parties, interest groups and other groups which signify them some possibility of being heard (Roskin). According to Lane and Ersson, the participation of people in societies has inclined towards indirect platforms (Lane and Ersson).
It can therefore be concluded that interest groups and political parties are both conducive to common good provided that they are not self centered and strive to achieve their objectives without pursuing any vested interests which are targeted at attaining some personal objectives a particular group of people.
Works Cited
Cohen, Mitchell and Nicole Fermon. Princeton readings in political thought: essential texts since Plato. Princeton: Princeton University Press, 1996.
Daver, B. Siyaset bilimine giris [Introduction to political science]. Ankara: Siyasal Press., 1993.
Lane, J and S Ersson. Politics and society in western Europe. London: Sage, 1987.
Madison, James. The Federalist # 14. New York: J. McLean and A. McLean, 1788.
Raadschelders, Jos C N. Government: A Public Administration Perspective. M.E. Sharpe, 2003.
Roskin, Michael G. Political Science: An Introduction. 11th Edition. Boston: Longman, 2010.
Rosseau. Book III. Geneva, 1770.
Tansey, Stephen D. and Nigel A. Jackson. Politics: the basics. London: Routledge, 1995. Read More
Share:
Tags
Cite this document
(“Interest groups and Political parties Essay Example | Topics and Well Written Essays - 500 words”, n.d.)
Retrieved from https://studentshare.org/history/1585138-interest-groups-and-political-parties

CHECK THESE SAMPLES OF Interest groups and Political parties

...this century have largely understood the premise that pressure groups should be replaced with the term ‘interest groups’ because it is a more direct, positive and engaging outlook of such groups, which essentially is a good thing for the political domains of America. On the same token, the difference between the interest groups and political parties are present, yet the two remain inherently similar in their workings. The political parties nominate candidates to seek an elected office while the interest groups do not run...
40 Pages(10000 words)Dissertation

...is ensured by the system itself, “as the two major parties keep to the middle of the road to appeal to a broad range of middle-class interests,”3 hence the preservation of political and governmental stability. As we may notice, Republicans and Democrats seem to uphold comparable ideals when the interest of the American population as a whole is concerned, only that they do not share the same opinion as to who are most appropriate to be bestowed the right of governance. Upon declaration of the winning candidates in an election, cries of deception are hardly evident unlike in some countries where political parties exist in multitude and...
4 Pages(1000 words)Essay

..."POLITICAL PARTIES AND PRESSURE GROUPS: An Aid or a Hindrance to Democracy" Come election time, many politicians vie for a position in the government where people would vote and select their government officials. This is a situation on how a democratic government works. Democracy is often implemented as a form of government in which policy is decided by the preference of the real majority (as opposed to a partial or relative majority of the demos/citizens) in a decision-making process, usually elections or referenda, open to all or most citizens. (Wikipedia) In this kind of government, the general public practices a freedom where everybody can participate in making a decision especially...
5 Pages(1250 words)Essay

...Political Parties Traditional Moral and Political Philosophy Campaign Add: Party Conservative and Traditional Affiliation Party Campaign Slogan: "Tradition is the moral way." Party's Platform: The Conservative and Traditional Affiliation Party believes in upholding traditional beliefs and family values. This party is conservative Christian and believes in most moral and ethical conservative beliefs. They are pro-life, do not uphold the death penalty, and follow beliefs that represent Christian tradition. Therefore, on abortion, they stand for pro-life, and believe that the fetus is an actual human...
2 Pages(500 words)Essay

...Interests Groups The group I would form to advocate for this issue is my fellow This is because they are the people whom we interact together in the university and we can meet frequently to organize the formation of the group. These are the right people to work with as they are in the University, as they understand how the funds are spent in the facility. In addition, we can cooperate in collecting the required information in the process of forming a group (Hout 2012, p. 88). Students are the closest people in the university and we can share ideas together on how we can go about the issue. The students are the affected people when the parent reaches a point that he/she cannot pay the school fees because their learning is affected... . The...
2 Pages(500 words)Essay

...Module Roles That Political Parties and Interest Groups Play in Mobilizing Electoral Participation in Contemporary U.S. Society Political parties and interest groups play an important role in mobilizing the citizens towards participating in the electoral process in America. The party system in the US can be defined as centrist however; they are not as ideological as in other nations. A political party is defined as office holders, activities as well as voters that are linked to a group label and focus towards electing individuals of a...
6 Pages(1500 words)Essay

...October 20, Interest Groups An interest group can be defined as a group of individuals who have the same objective or are working together to achieve a certain ideal. Interest groups play an important role in policy making and in pushing for the action of various bodies in given matters. These include economic matters among others (Baker and Losco, 2008). They are also important in expressing the opinion of the people and the government also relies on them to ensure that they know the complaints of the people and address their concerns appropriately. As Ragone (director of graduate programs, University of Northern Iowa)...
1 Pages(250 words)Essay

Let us find you another Essay on topic Interest groups and Political parties for FREE!